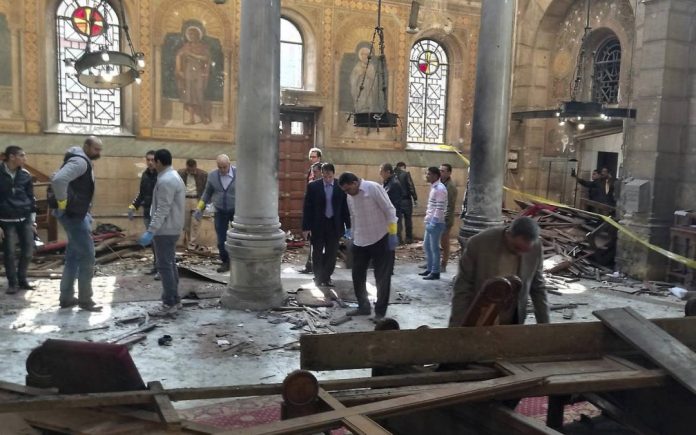 An Open Letter to Bishop Joseph Bambera, Chairman of the USCCB’s Committee for Interreligious Affairs

You are to be commended for your December 29th statement asking Catholics to pray for “our Coptic brethren who are enduring martyrdom for the sake of Christ.” Catholics need to know the extent of the attacks on Christians in the Muslim world. As you point out, there have been 2,000 attacks on Coptic Christians in Egypt in just the last three years. These have included several horrific church bombings and the slaughter of 35 Christians who refused to convert to Islam when their buses were ambushed by Islamic gunmen.

Deadly anti-Christian attacks have become commonplace in the Muslim world. Catholics need to know about them, and they also need to know the “why” of these attacks. There will be no end of the bloodshed unless we understand why it’s happening.

On this point, the USCCB has been remiss. Numerous USCCB statements over the last 17 years have, in effect, absolved Islam of the crimes committed in the name of Islam. Instead of naming the religious ideology that motivates the terrorists, Church officials have been content to echo the mantra that terrorism has nothing to do with Islam.

Meanwhile, in the face of the Islam-inspired genocide of Christians, the USCCB has joined up with the problematic campaign against “Islamophobia.” This strikes me as a grotesque inversion of priorities. At a time when Christians need to be alerted to the dangers posed by the spread of Islam, why are bishops throwing themselves into the Muslim Brotherhood-manufactured battle against “Islamophobia”?

I put “Islamophobia” in quotes because a phobia is an irrational fear. But many people—including Christians living in Egypt—have good reason to be afraid. It does a disservice to them to say that their fears are baseless. Or to say that they have nothing to fear from authentic Islam.

Your own statement mentions various bloody terrorist attacks in Egypt, but the words “Islam” and “Islamic” do not appear in it. By contrast, an article in Coptic Solidarity states that “Islamic oppression” is the main driving force of persecution. Is the Coptic fear of Islamic oppression “Islamophobic”? Or is it a perfectly rational fear?

Your statement calls attention to terror attacks in Egypt. It’s important that Christians know about them. At the same time, a singular focus on atrocities can be misleading. It tends to feed into the PC narrative that the threat to Christians is limited to a handful of extremists. But there is a much bigger problem to contend with—namely, a widespread, daily, and unrelenting persecution of Christians which includes discrimination, intimidation, rapes, abductions, forced conversions and the destruction of Christian homes and churches. According to the Coptic Solidarity article, this persecution comes from every level of Egyptian society, and includes Muslim clerics, local officials, “normal citizens,” and one’s own family (in the case of Muslim converts to Christianity).

The widespread persecution of Christians that exists in Egypt can also be found in almost every Muslim majority society—in Pakistan, Syria, Iran, Iraq, Nigeria, Sudan, Indonesia, and elsewhere. The pervasive nature of the persecution in Islamic countries suggests that it does not stem from any distortion of Islam, but rather from the core texts and teachings of mainstream Islam itself.

Which raises a question. Could it be that all these Muslims in diverse parts of the world have misinterpreted Islam? Or is it more likely that the real misunderstanders are Catholic prelates who, though well-intentioned, have no lived experience of Islam?

Various USCCB statements over the years present Islam as a religion of peace and justice—a religion not unlike Catholicism. Indeed, one keynote address to a USCCB-sponsored Muslim-Catholic dialogue was titled “Living our faith together”—as though Muslims and Catholics share a common faith. But, of course, they don’t. The idea that they do is not based on the texts, teachings, law books, and history of Islam, but on wishful thinking.

This is not to suggest that Catholic leaders should attack Islam, but that they should provide Catholics with a more realistic picture of the Islamic faith. The current policy of glossing over the problematic aspects of Islam is highly misleading, and it has several harmful consequences. Let’s focus on just one of them.

If Church leaders continue to downplay and even deny the supremacist aspect of Islam, many Catholics will be unprepared for the kind of aggression now endured by Christians in Egypt, and elsewhere.

This aggressively anti-Western culture—let’s call it “Egypt” for short—has already entered Europe. What now appears to be an Islamic invasion was enabled by naïve immigration policies based on the same uncritical view of Islam embraced by the USCCB. Like Egyptian Christians, Europeans must now worry about being attacked at any time or place—on buses, trains, in concert halls, and Christmas markets.

Europeans were also unprepared for the cultural aspect of the invasion. It was naively assumed that Muslims would assimilate to Western values. Instead, Europeans are being forced to accommodate themselves to Islamic values—to polygamy, misogyny, honor violence, and FGM. And also to anti-Semitism. Jews are now fleeing Europe in numbers not seen since the Nazi era.

Europeans are losing their civilization not because they are “Islamophobic,” but because they were ignorant of Islam. They obediently accepted the smiley-faced depiction of Islam presented to them by social and governmental elites, and now they are paying the price.

Will “Egypt” come to America? It’s a possibility that the USCCB should contemplate. America’s bishops have been guilty of promoting the same pleasant picture of Islam and Islamic immigration that has thrown Europe into chaos. That approach hasn’t worked there. Why suppose it will work here?

It seems reckless to continue along that path. For the sake of Christians all over the world, America’s bishops need to rediscover the Catholic tradition of realism, and reconsider their Islam policy. It’s not too late for a course correction.

Respectfully yours in Christ,

This article originally appeared in the February 20, 2018 edition of Catholic World Report under the title: “The Problem is not ‘Islamophobia’ but Ignorance of Islam”