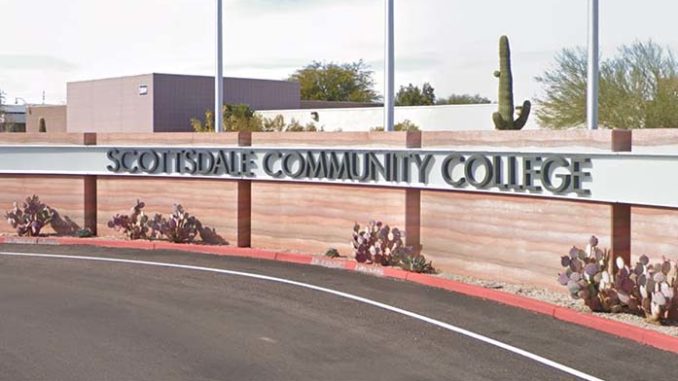 A political science professor with 24 years of teaching experience at Scottsdale Community College has received numerous online death threats addressed to himself and his family, after a student complained about the contents of a test addressing the issue of Islamic terrorism.

When officials demanded that Professor Nicholas Damask apologize to the student — and he refused on the grounds of academic freedom — the college went ahead and apologized for him.

Since national news stories have recently been published about Damask’s predicament, there has been a firestorm of backlash against the college’s treatment of the professor.

Damask, a tenured faculty member who wrote his doctoral dissertation on terrorism, earned his Ph.D. from the University of Cincinnati and Master’s from American University in Washington, D.C.

In an interview with Robert Spencer for Front Page Magazine, Damask asserted that the answers to his quiz questions were accurate, based on specific Islamic sources, including the Qu’ran and the hadiths.

Here are the quiz questions, given during the current spring semester, that became the source of this controversy:

Who do terrorists strive to emulate? Mohammed.

Where is terrorism encouraged in Islamic doctrine and law? The Medina verses.

Terrorism is _____ in Islam.  Correct Answer: A. justified within the context of jihad

A student, who previously said he had been enjoying the course, complained in an email to Damask that those questions offended him, because they were “in distaste of Islam,” Damask told Spencer. Damask sent a couple of emails in response to the student’s complaint, but the student did not respond to him.

The next thing Damask knew, the college’s Instagram page was bombarded with angry, threatening messages about Damask, the college and the content of the quiz. Online comments included: “if he is still around I suggest the student take action to make sure he isn’t,” “F—— Die!,” and “I hope one day some kid shoots up the school.” There was also a threat to burn down the school.

It is believed that the student posted the quiz questions on the Instagram account of a well-known Muslim comedian, who has about 125,000 followers. That apparently led to the large number of threatening and derogatory posts on the college’s page.

The college responded to those threats by siding with the student.  College officials asserted on Instagram that the student was correct and the professor was wrong, Damask said in his interview with Spencer. No complaint had been filed by the student and there was no due process for the professor.

The officials wrote that Damask’s questions were Islamophobic, and he would likely need to meet with an Islamic religious leader to go over the content of his quizzes, and take a class from a Muslim before teaching about Islamic terrorism.

Damask was contacted on Sunday for this story, but did not immediately respond.

Damask has had a stellar record at the college, with a 100 percent rating, of 27 students who were asked if they would take his class again, according to the ratemyprofessors.com website. The overall quality of his classes were rated at 4.54 out of 5. Comments from students included: “This guy is the only professor that I’ve actually learned from”; “I love that the lectures are very clear and straight to the point” and “Dr. Damask is my favorite professor of all time! He makes every POS professor at ASU seem boring.”

Kathleen Winn, governing board member of Maricopa Community College District, said it was hypocritical of the school officials to ask Damask to apologize. Although the professor was soundly criticized for offending Muslims, another professor at Mesa Community College, within the same district, was firmly supported by officials after he showed a pornographic movie to his students which denigrated Jesus and offended a Christian student.

A political science professor at Mesa Community College was supported after he offended some students when he brought a blow-up doll of President Donald Trump to class in 2018, adorned with swastikas.

Winn said that Damask’s parents, who are in their 80s, and his 9-year-old grandchild have also been threatened. According to reports, the family has gone into hiding.

“You have death threats and they are not taking precautions to protect the professor. They have thrown him under the bus. We put him at risk by not backing him up.”

Winn said there is no good reason for the college officials to apologize for the acceptable actions of a professor, who has had an exemplary record for 24 years. Instead, they should have backed him — if they really believed in academic freedom.

“If you say you are an educational institution, you want students to think for themselves and draw their own conclusions,” Winn said.  “If you are telling them how to think and what they should think you are not allowing for the whole process of education to occur.”

Winn said school officials have violated their own guidelines, because they chose political correctness instead of academic freedom. As a result, there has been a big backlash from people nationwide, who are standing with the professor since it became a national news story.

“And they’re asking the professor to apologize,” Winn said. “That is the definition of hypocrisy. His questions showed Islamic terrorists are dangerous. Guess what, the people he upset threatened to kill him. He was not wrong.”