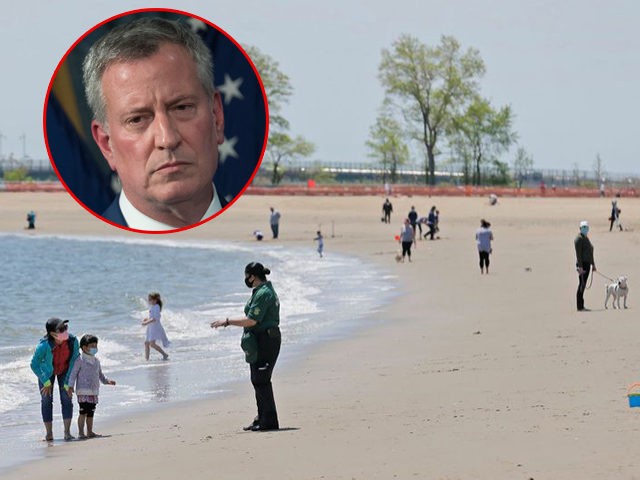 New York City Mayor Bill de Blasio (D) on Monday warned people who attempt to swim at the city’s public beaches Memorial Day weekend will be removed from the water as part of an effort to combat further spreading of the Chinese coronavirus.

De Blasio said that New York City will begin installing fencing along the city’s beaches and asked residents to avoid large gatherings, and playing sports. Lifeguards will also be prohibited from being on duty.

“Anyone tries to get in the water, they’ll be taken right out of the water,” De Blasio said.

“It’s a dangerous situation to ever go in the water if there are no lifeguards present,” he added.

Though Big Apple beaches are closed for Memorial Day weekend, New York Gov. Andrew Cuomo will allow beaches in other parts of the state to open. Beaches in Connecticut, Delaware, and New Jersey are also opening this coming weekend.

As of Monday, New York City has over 193,000 coronavirus cases and 15,786 deaths, according to data tracked via Johns Hopkins University.

Half of New York state’s 10 regions began reopening their economies Friday as New York City’s mayor said local officials are formulating how to cope with the COVID-19 pandemic in upcoming hot summer weather.

Cuomo, at his daily briefing in Albany, announced that five of the state’s 10 regions have moved on from the restrictions of the statewide “NY Pause” order prohibiting all non-essential work.

But while the upstate regions of Central New York, Mohawk Valley, Finger Lakes, North Country, and the Southern Tier are reopening Friday, non-essential businesses in New York City, its surrounding suburbs, and several other areas will remain closed.

The Pause order was extended through May 28 for regions not meeting enough health criteria to allow for reopenings, but the areas can move on at any time if they meet them, Cuomo said.

The UPI contributed to this report.