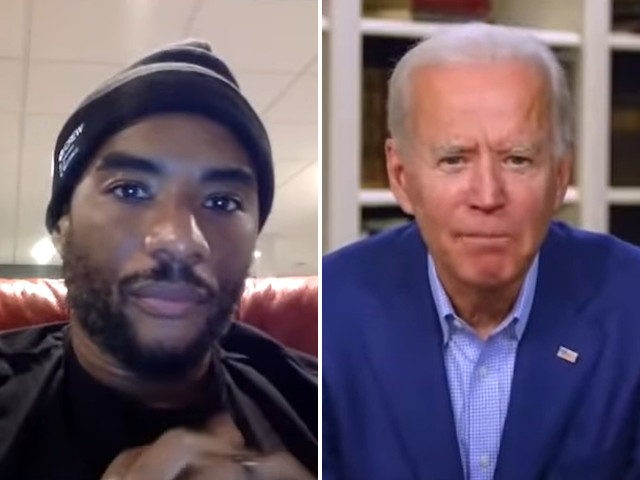 Former Vice President Joe Biden (D) declared Friday morning that if black Americans are unsure whether to support him over President Donald Trump in the November election, “then you ain’t black.”

Biden made the unsolicited racially-charged remark as he departed his virtual interview with Breakfast Club co-host Charlamagne tha God.

“If you have a problem figuring out whether you’re for me or Trump, then you ain’t black,” Biden told Charlamagne, not in response to any question, but to the host’s statement: “It’s a long way until November, we’ve got more questions.”

“It don’t have nothing to do with Trump, it has to do with the fact — I want something for my community,” the radio host shot back.

“Imagine if Donald Trump said this,” he then asked.

Biden’s comment received further blowback from other political and media figures from across the media spectrum:

Earlier in the interview, Charlamagne pressed Biden over his record on racial issues and whether he is considering an African-American woman as his vice-presidential pick.

Charlamagne has previously criticized Biden, taking aim at the presumptive Democrat nominee for not appearing on his show during the Democrat primary race. Asked in March why Biden has avoided his program, Charlamagne told MSNBC:  “I have no idea,” before adding: “It goes back to what I said: Joe Biden owes black people his political life. You know what I’m saying? So don’t disrespect that base by not showing up, especially when, you know, all your other former opponents did.”

“Black people saved his life the past couple of weeks,” he added of Biden’s primary election victory in South Carolina on March 1. “His campaign would be dead if it wasn’t for our O.G. Jim Clyburn in South Carolina endorsing him, and all those black voters in the South going out and voting for him. Plus, you were the vice president for the first black president. You, in particular, definitely need a black agenda.”

In September, Charlamagne called out Biden for offering to send a campaign surrogate instead of sitting down for an interview with the radio host, saying the move by the candidate demonstrates “white entitlement and privilege.”

“Joe Biden has offered to send his surrogate, so that tells me a lot about what Joe Biden thinks about our audience. I think Joe Biden might be suffering from that same white entitlement and privilege and ego where he’s just that old school white male who feels like ‘hey man, they need me, I don’t need them or I’ve got them already.’ That’s not respect,” he lamented in an interview with CNN.

Carlson: Why Did We Keep ‘Playing Along’ with Mask Mandate After BLM Riots? — ‘We Acquiesced to Their Power Grab’