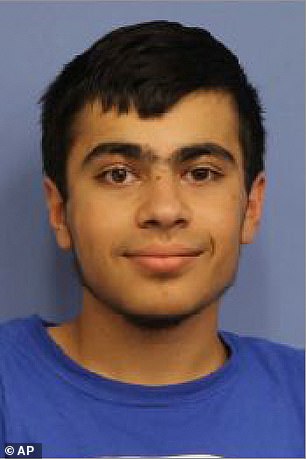 Source: Center for Immigration Studies (CIS), By Todd Bensman on May 22, 2020

The Syria-born attacker killed Thursday morning during an apparent jihad-inspired attack on a Texas naval air station was neither a resettled refugee nor an asylum-seeker who slipped through security vetting. Instead, CIS has learned that he fell under an immigration category unusual for foreign-born extremists who have attacked inside the United States.

Adam Alsahli, 20 at the time of his death Thursday, was already a U.S. citizen when he moved from the Middle East to Corpus Christi, Texas, in 2014 with his mother (and likely several siblings) at the height of the Syrian civil war, by virtue of his father’s American citizenship, according to two sources familiar with the family’s immigration status. The attacker’s 75-year-old father, Salim Alsahli, became a naturalized U.S. citizen in 1984, the sources told CIS, and subsequently seems to have sired a family back in Syria that included Adam Alsahli’s birth in 1999.

Although his children and their mother were born in and resided in the Middle East, the father’s U.S. citizenship conferred U.S. citizenship on Adam Alsahli, since he properly registered a declaration at a U.S. embassy or consulate office overseas. That apparently happened with Adam Alsahli because by the age of three, in the year 2002, he was granted an American passport that was repeatedly renewed over the years, sources said.

In 2014, at the height of the civil war inside Syria, Adam and at least his mother moved to the United States. The mother is currently a legal permanent resident who has a pending application for U.S. citizenship, the sources said.

With an American citizen father anchored inside the United States, Adam Alsahli, his siblings, and their mother would not have entered any refugee resettlement pipeline, nor would they have had to apply for asylum, processes that would have required fairly extensive security vetting. Adam Alsahli, then about 15 years old, would have been moved right to the front of the line with almost no security vetting; likely the same would have been true of his mother and siblings.

Little is known at this point about Alsahli’s interest in Islamic extremist theology or connections to foreign groups, as the FBI continues an investigation. Nor is it yet known where the family was living prior to entering the United States in 2014.

At about 6:15 a.m. Thursday, Alsahli drove a vehicle up to the gate of the naval air station near Corpus Christi, exited, and began firing shots at military personnel. One round hit the bullet-proof vest of a sailor guarding the gate, which drew a response from other armed sailors, who killed Alsahli.

One well-placed source told CIS that Alsahli drove up to the gate wearing an Arab head-wrap garment and blaring Arabic language music from a vehicle stereo. Arabic-language writings were found inside the vehicle. Although these details could not be independently confirmed, the FBI stated at a press conference later Thursday that Alsahli’s attack was “terrorism-related”. A linkedIn page for Adam Alsahi of Corpus Christ contains only one bit of biographical information, which is that he is a “student at Umm Al-Qura University” in Mecca, Saudi Arabia.

Since 9/11, American homeland security authorities have closely tracked the methods by which foreign-born attackers and plotters have entered the country and have enhanced security vetting and fraud prevention. But Islamic extremists continue to get past vetting in refugee resettlement and asylum and visa application processes, such as the so-called “fiancée visa” that enabled one of the 2015 San Bernardino, Calif., attackers to enter the country. In April of this year, for instance, the FBI arrested a Pakistani medical doctor on terrorism charges who had gone to work for the Mayo clinic on an H-1B visa granted in 2018.

In December 2019, a Royal Saudi Air Force pilot trainee — participating in an American program to provide training to the military personnel of allied countries — murdered three American service personnel and wounded eight others in an attack on a Pensacola, Fla., air base. In a press conference this week, Attorney General William Barr and FBI Director Christopher Wray announced investigative findings that the pilot trainee, Mohammed Alshamrani, was an active member of al Qaeda in the Arabian Peninsula who maintained regular contact with the terrorist group even while training at the base.

Family immigration of the sort that Alsalhi and his mother used to enter is subject to minimal security vetting. Foreign nationals with conferred or “retained” U.S. citizenship, particularly if they were driven from a foreign war, are fast-tracked in like any American citizen caught up in a troubled area, according to CIS’s Jessica Vaughan, a former consular officer.

But Vaughan sees the retained citizenship rules as a vulnerability that has not been sufficiently recognized, when individuals holding American passports have no meaningful connection to the United States. While security checks may have found nothing on Alsahli at 15 years of age at the time he moved to Texas, older people with citizenship retention rights also build lives in foreign countries and then move to the United States.

“This is definitely a vulnerability in our system; we can’t really deny entry to a U.S. citizen,” Vaughan said. “But over many years, mainly to accommodate the families of American expatriates, there has been an erosion of citizenship retention requirements, and erosion of the notion that a U.S. citizen should have some meaningful ties with this country, especially if they’re spending their lives outside of the country.

“This is an example of why we need to be more careful and have stricter retention requirements, and that should also apply to the children of birth tourists. There are tens of thousands of people around the world, many living in areas hostile to the United States, who are U.S. citizens, but for whom that citizenship is just a matter of convenience, without any understanding or affinity at all for our country.”