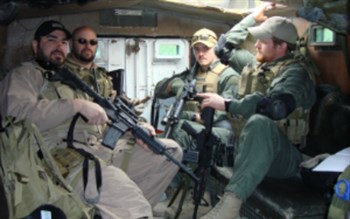 An investigative journalist senses that momentum is growing for President Donald Trump to issue pardons for four Americans she says were “victims of a miscarriage of justice” as a result of their assignments to protect a U.S. diplomat in Iraq.

Once a financial journalist for Reuters, Gina Keating now considers herself a freelancing investigative journalist who for five years has covered the trials of Dustin Heard, Evan Liberty, Nicholas Slatten, and Paul Slough – the men comprising Raven 23. While she admits the case was not her “bailiwick,” her 35 years of experience as a writer and her love for those men she argues served their country proudly has compelled her to join the fight to bring their stories to the forefront.

The journalist credits several people for gaining the attention of President Trump to consider pardoning the men who were “clearly victims of a miscarriage of justice” – including the Williams & Connolly law firm, attorney David Harrison of the litigation firm Spiro Harrison, and the family members and countless supporters of Raven 23. In fact, 33,000-plus people have signed a petition to the president launched by Clint Lorance, a former wrongly convicted soldier.

While Heard, Liberty, Slatten, and Slough weren’t active military at the time, they continued to serve their country as contractors tasked with protecting a U.S. diplomat in Iraq at the time of the unfortunate 2007 Nisour Square incident. Their compelling story was recently reviewed by the Congressional Justice for Warrior Caucus (CJWC) – and with the help of the CJWC, Keating says, “President Trump is very aware of this case.”

OneNewsNow spoke with Keating about rumors of a presidential pardon for the four men of Blackwater’s Raven 23.

U.S. Congressman Louie Gohmert (R-Texas), the head of the CJWC, was “very impressed” following a briefing about the case, says Keating. In fact, she says, “the entire membership was up in arms about the complete miscarriage of justice [throughout their trials].” The Caucus has decided to help these veterans to the full extent they have helped others get pardoned from unjust incarceration.

The case now has the attention of the president, and Keating suggests “he is not ill-disposed towards it, [adding] it sounds like [these men] have a very good chance [for pardon].” This is probably “the most momentum” that Heard, Liberty, Slatten, and Slough have had since they were convicted in 2014, she explains.

“There’s a broad understanding among people that this was an absolute miscarriage of justice,” Keating contends. “This was a political show trial that was designed to appease the Iraqi government at a time that was very difficult for the Obama administration.”

Giving a few examples, the journalist cites the negotiation of oil leases in the region; the Status of Forces Agreement (SOFA), which “establishes the framework under which armed forces operate within a foreign country”; and the threat of the removal of all military contractors from Iraq.

Long before the prosecutorial misconduct grew to the exponential levels it has in recent years, Keating points out, former Vice President Joe Biden played “a very active role” in the convictions of Heard, Liberty, Slatten, and Slough. The case had been thrown out in 2009, but Biden maintained a promise to appease the Iraqi government, claiming he would “get justice” for the Iraqi people by putting each of the military contractors involved in prison. The entire case was not only tainted by federal prosecutors, but also high-ranking members of the U.S. government.

While it has been an enduring, uphill battle to find true justice in the case, the indisputable facts surrounding the incident – which continue to reveal the misconduct of prosecutors – is creating a wave of support to set four innocent men free. On May 12, Keating had the opportunity to speak to Rep. Gohmert, who confirmed his determination to seek a pardon for Raven 23, also known as The Biden Four. According to the journalist, the representative was “absolutely appalled” by the case.

In the interview with Keating, Gohmert acknowledged the incredible value and dedication of military contractors. Speaking about the recent briefing given to the CJWC, he acknowledged that “[the members of Raven 23] had been thrown to the wolves by the Obama administration – especially by Joe Biden.” And he agrees with those who have supported Raven 23 from the beginning of this burdensome ordeal, clearly pointing out “they had a case stacked against them.” There were a lot of mistakes and cover-ups made in the initial investigation led by Iraqi officials.

Heard, Liberty, Slatten, and Slough have the complete backing of the CJWC. The families, friends, and all the parties involved remain hopeful for a presidential pardon to be the next step in doing what Keating says is the right thing for the four men of Raven 23.