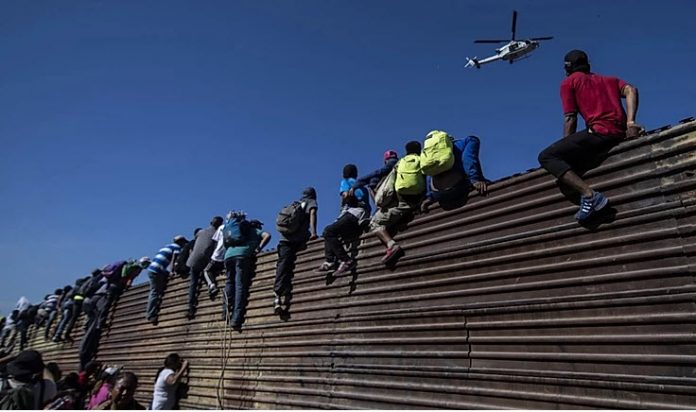 For the past 18 months we have seen a concerted effort to vilify the Trump administration for declaring a national emergency on the southern border and all the actions that have been taken in support of that declaration. The left continues to talk about “cages” and “family separation.”

They say that all these actions were mean-spirited, racist, and xenophobic. They say it was inhumane and there was no reason to do it, so it must be about hatred toward immigrants. It has been their battle cry to demonize President Trump, the Border Patrol, and Immigration and Customs Enforcement (ICE). It is time to talk about facts that have been ignored.

The so-called cages were planned, funded, built, and utilized by the Obama administration. That is a proven fact. Any news outlet could easily send a Freedom of Information Act request for those records, which would end all speculation. Do you think anyone in the media did that? Of course not, because it would not fit into their false narrative. The simple fact is, they were not really cages. They were chain link fence dividers that kept the unaccompanied alien children (UAC), who crossed the border by themselves, separated from unrelated adults until the Department of Health and Human Services took custody and placed them in a more adequate facility. No one called them cages during the Obama administration.

As surging migrant populations began to overwhelm the Border Patrol, more and more agents were pulled from the line to process these families, prepare meals, prepare baby formula, make medical runs, etc. Forty to 60 percent of the Border Patrol was no longer working on border enforcement, which made our border extremely vulnerable. This humanitarian crisis quickly became a national security crisis.

If you are a criminal, a drug smuggler, a gang member or a terrorist, the border was wide open. A terrorist who wants to come to this country cannot buy a plane ticket or get a visa easily in a post-9/11 world because intelligence databases are used to vet those applicants. If you want to come here undetected, the border was extremely vulnerable at that time because of the lack of patrols.

Finally, the Democrat-controlled House of Representatives knew about the crisis at the border and did nothing. In fact, they didn’t want people crossing our border detained at all. They wanted the UACs  delivered faster to their parents or those claiming to be parents. They didn’t want to fund a wall. They wanted open borders. They would not appropriately fund ICE so it could detain people. Remember, they claimed there were no caravans and it was a “manufactured” crisis. But soon, the entire nation would see it for what it was. They could no longer deny it.

Most importantly, they refused to close the three loopholes that caused all of this. The three loopholes were easy to fix. The first loophole fix would be to change the Trafficking Victims Protection Reauthorization Act laws so children of Central America follow the same process that applies to children from Mexico. If you are a child from Mexico and it is determined that you are not a victim of trafficking, you could be quickly returned home. However, if you are a child from Central America, you had an entirely different process that could take years. The parents and sponsors knew this and took advantage of it, knowing that the government would eventually deliver the child to them as required by this outdated law.

The second loophole, a court ruling from 2015 that stated that children cannot be held beyond 20 days, was also a simple fix, but Congress did nothing. Let ICE hold families in a family residential center long enough to see a judge, usually around 40-45 days. The left said that the Trump administration wanted to indefinitely hold families. That was another lie. We have proven it takes about 40-45 days. They would not be held in a jail, but a facility that was built and designed for families and offered educational programs, pediatricians, doctors, recreational activities, freedom of movement, etc.

How do I know it took about 40-45 days? Because we did exactly that in 2015 and it worked. The vast majority lost their cases when they saw a judge and were quickly returned home. That resulted in an almost immediate decline in illegal crossings. That’s why many on the left are fighting a change to the court ruling: because it will work again.

The third loophole that needed to be fixed was to change the threshold of proof for asylum cases. Prospective asylees must show they are fleeing persecution from their home government. The fact was that nearly 90 percent would pass their first interview at the border because the threshold was so low. They were instructed by the cartels on exactly what to say in order to pass. Then they were released to see a judge later. However, if they ever did show up in court, 86 percent failed the higher threshold requirement. All that needed to be done was to close that gap and make that first interview more meaningful and closer to what is required by the courts. The result would be almost 86 percent of these families could have their legal due process quicker and be sent home earlier rather than being released which of course would significantly decrease fraudulent claims and remove the incentive for others from making the journey.

These decisions were not based on hate or racism. It was doing whatever could be legally done to save countless lives, both U.S. citizen and immigrant lives and to protect the nation. That is why declaring a national emergency made sense.

Right now, because of President Trump, border crossings are down nearly 80 percent. How many lives were saved because 80 percent chose not to make the journey? How many women were not raped? How many overdose deaths didn’t happen? How many millions of dollars did not go to the cartels? Those willing to see beyond the sensational partisanship in the media and Capitol Hill will find that our president and our immigration enforcement agencies are not only defending our nation’s border, but protecting human lives on both sides of it

Tom Homan is the former Acting Director of Immigration and Customs Enforcement and a Senior Fellow at the Immigration Reform Law Institute.

Biden issues gag order on Border Patrol, does all he can to cover up illegal alien surge