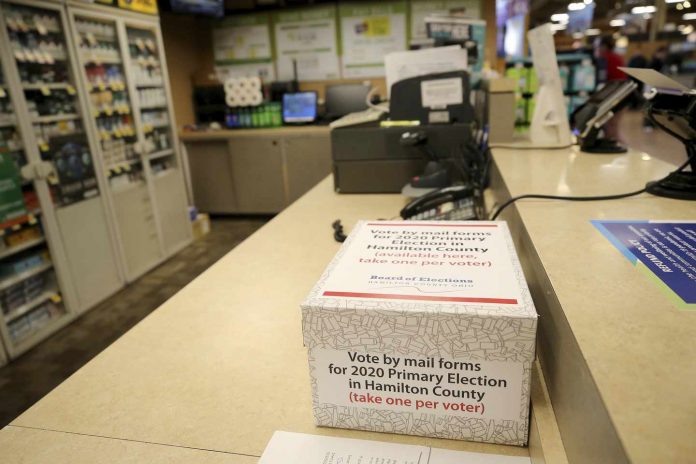 Between 2012 and 2018, 28.3 million mail-in ballots remain unaccounted for, according to data from the federal Election Assistance Commission. The missing ballots amount to nearly one in five of all absentee ballots and ballots mailed to voters residing in states that do elections exclusively by mail.

States and local authorities simply have no idea what happened to these ballots since they were mailed – and the figure of 28 million missing ballots is likely even higher because some areas in the country, notably Chicago, did not respond to the federal agency’s survey questions. This figure does not include ballots that were spoiled, undeliverable, or came back for any reason.

Although there is no evidence that the millions of missing ballots were used fraudulently, the Public Interest Legal Foundation, which compiled the public data provided from the Election Assistance Commission, says that the sheer volume of them raises serious doubts about election security.

These questions are particularly relevant as the COVID-19 pandemic is forcing states across the country to rapidly expand vote-by-mail operations in an election year. Democratic Sens. Amy Klobuchar and Ron Wyden have proposed the Natural Disaster and Emergency Ballot Act of 2020, a bill that would allow every eligible voter the opportunity to vote by mail, regardless of state laws governing mail-in ballots.

A significant increase in mail-in voting this fall could greatly incentivize “ballot harvesting,” where third parties collect mail-in ballots on behalf of voters and deliver them to election officials. There’s long been a consensus that such a practice incentivizes fraud, and ballot harvesting is illegal in most of the country. Public debate over the issue has intensified in recent years after a GOP operative in North Carolina was indicted for crimes related to ballot harvesting in 2018.

That same election cycle California legalized ballot harvesting, and observers say the practice played a key role in ousting several Republican congressmen in Orange County in 2018, a longstanding GOP stronghold in a state that has become very liberal in recent decades.

The fact that millions of unused mail-in ballots are floating around in every election cycle “is not a secret type data here – it’s sitting there on the Internet, and you’re paying for the server cost,” notes Logan Churchwell, a spokesman for PILF. “So what do people that really focus on the election process do about that? They go into ballot harvesting. If there’s so many ballots out there in the wind unaccounted for by election officials, surely some manpower could be dedicated to go bring them in. And that’s another part of the system where you have weaknesses and risk.”

To illustrate the risk, Churchwell notes that in 2016 Hillary Clinton won the popular vote by garnering over 2.8 million more votes than Donald Trump. But nearly 6 million unaccounted mail-in ballots were never counted in 2016, more than twice her margin in the popular vote. The potential to affect elections by chasing down unused mail-in ballots and make sure they get counted – using methods that may or may not be legal – is great.

There’s little doubt that as the number of mail-in ballots increases, so does fraud. A 2012 report in The New York Times noted that voter fraud involving mail-in ballots “is vastly more prevalent than the in-person voting fraud that has attracted far more attention, election administrators say. In Florida, absentee-ballot scandals seem to arrive like clockwork around election time.” According to a Wall Street Journal report on voter exploitation in Hispanic communities in Texas, mail-in ballots have “spawned a mini-industry of consultants who get out the absentee vote, sometimes using questionable techniques.” Poor, elderly, and minority communities are most likely to be preyed upon by so-called ballot “brokers.”

Concerns about fraud in mail-in ballots were serious enough that a 2008 report produced by the CalTech/MIT Voting Technology Project recommended that states “restrict or abolish on-demand absentee voting in favor of in-person early voting.”

“The convenience that on-demand absentees produces is bought at a significant cost to the real and perceived integrity of the voting process,” the report added. “On the face of it, early voting can provide nearly equal convenience with significantly greater controls against fraud and coercion.” Similarly, another academic study done in 2008 from Reed College flagged various concerns related to absentee voting and conceded there is a “great deal of literature on turnout” but when it comes to mail-in ballots there is “a dearth of research on campaign effects, election costs, ballot quality, and the risk of fraud.”

Despite these concerns, five states – Oregon, Washington, Colorado, Utah, and Hawaii – now do all elections exclusively by mail. Supporters point to smooth elections in these states as proof that it works. But PILF obtained voter data from Oregon, the first state to adopt voting by mail exclusively, for the 2012 and 2018 elections and checked it against census data. Of the 7 million ballots the state sent out in those two elections, some 871,000 ballots are totally unaccounted for.

Losing only one of eight ballots, as opposed to the national average of one in five, may be the result of Oregon having a more accurate listing of voters’ addresses than many other states, but that’s still a very high percentage of missing ballots, and Oregon would not reveal its data for the 2014 and 2016 elections for reasons the state would not disclose.

Regardless, U.S. Census data confirms that 11% of Americans move every year, and voters on the lower end of the economic scale are especially transient. Without implementing some extensive, and likely problematic, government surveillance program, there’s no way for election administrators to reliably get ballots to tens of millions of Americans every election cycle without a large percentage of ballots going to the wrong address. This problem is compounded by states that mail ballots automatically. (The author of this piece is from Oregon, where ballots with his name on them were sent to his parents’ address for years after he graduated from college and moved out of state — despite repeated contacts with the county clerk telling them he had moved.)

The inherent problems of mail-in voting are being widely ignored, however. Use of mail-in ballots more than doubled from 24.9 million in 2004 to 57.2 million in 2016, and around 40% of U.S. votes are now done by mail. Along with this dramatic increase there have been virtually no new safeguards, scrutiny, or additional research on the risks of vote by mail. If the current pandemic is going to force the issue during a presidential election, proponents of voting by mail may have to address obvious risks that come with proposing that more than 200 million ballots be mailed out this fall.

“I really think the only reason vote-by-mail problems are not getting more attention on a regular basis, is that it’s kind of an embarrassing problem and people just aren’t paying attention,” says Churchwell. “These numbers of missing ballots demonstrate large voter list maintenance failures and security gaps within the broader mail voting process.”