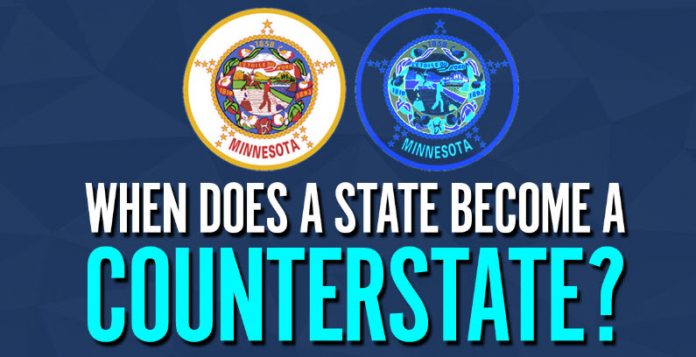 ANTESCRIPT: As this assessment was about to be released, an African-American man died at the hands of Minneapolis police. The police officer’s action should be investigated, there should be trial, and justice should take its course.

That said, the police killing an African-American in Minneapolis is severable from its political warfare exploitation—which was spring loaded, ready, and on time. This article remains on point in warning that Minnesota has become a central Neo-Marxist / Islamic Movement united front activity posturing in advance of this election cycle. As “Warning on Racism” warned, the political warfare preparation of the (information) environment made such an event—somewhere—probable.

As may be further developed at a later time, from a political warfare perspective, a number of resisting arrest and related contentious “racism” events have been on the rise as the COVID narratives exhaust themselves. It’s just a matter of numbers that, at some point, such activity will lead to an overreaction by law enforcement that can then be used to jump-start the movement leading into the summer.

As the political season heats up, this means Antifa/BLM/MB street groups will be given broader latitude while the Minnesota AG will be under-responsive to mass line street violence from the Left, thus putting law enforcement in a highly defensive posture.

The killing of Mr. Floyd was a tragedy.

The spring-loaded narratives that followed were pre-packaged and are aimed at delegitimizing law enforcement in advance of a period of violence.

From months before the Minneapolis event, an action like this was foreseeable, was foreseen, and is, as is already occurring, designed to go national.

Is Minnesota still a state? This question may seem silly but, sometimes, you have to wonder. A few political warfare observations will highlight these concerns. Some will use the blue pill metaphor.

“Warning on Racism” argues that the neo-Marxist Left and the Islamic Movement (IM) will use the 2020 election cycle to escalate the delegitimization of America, the Constitution, and the electoral process.

It will do this through interoperable interactive hate speech narratives that integrate the Left’s “hate speech” with the IM’s “Islamophobia” memes.

It will be executed as part of a united front effort. These attacks are part of a larger campaign based on dialectical negation.

It will be executed as part of a united front effort. These attacks are part of a larger campaign based on dialectical negation. 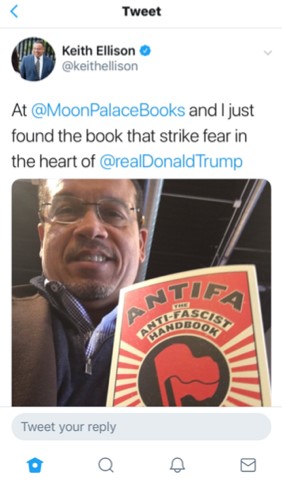 In January 2018, the Minnesota Attorney General, Keith Ellison, endorsed both Antifa and their tactics of intimidation and violence.

On May 4, 2020, CAIR announced the release of a video on YouTube in which Ellison endorsed and fundraised for CAIR. In the video, he introduced himself as the Attorney General and hailed CAIR as a civil rights (human rights) leader while invoking “War on Racism” memes:

There is much to unpack in Ellison’s declaration that CAIR is a civil rights organization while fundraising for that organization. The following points will help. (References are to Catastrophic Failure – Blindfolding America in the Face of Jihad (CF).

1. CAIR was formed out of Hamas. As the 2008 Holy Land Foundation trial documented, CAIR was formed out of Hamas (CF, 163 – 190). To this day, the S. District Court makes the documentary evidence of CAIR’s association with Hamas available online. As Article 2 of the Covenant of the Islamic Resistance Movement (Hamas) states, Hamas is the Palestinian branch of the universal Muslim Brotherhood Movement:

Article 7 relies on sacred text to justify Hamas’s killing of Jews. Since 1997, Hamas has been listed on the U.S. State Department’s list of Foreign Terrorist Organizations. It was about that time that CAIR was founded in order to separate from Hamas.

Hamas is a part of the IM. In fact, “Islamic Movement” is a part of Hamas’s real name: The Islamic Resistance Movement. Pertaining to the Islamic law CAIR commits to, when raising money for CAIR’s civil rights effort, it does so to support Muslim Brotherhood inspired Islamic law efforts. This is made clearer by the fact that the funds Ellison raises for CAIR are Zakat eligible.

3. CAIR raises Zakat eligible funds based on its fi-sabilillah mission. Fi-sabilillah, “in the cause of Allah,” is the mission of jihad. As stated in the Qur’an (9:60) and Islamic law (Reliance of the Traveller, Book H – “Zakat,” “The Eight Categories of Recipients,” H17, “Those Fighting for Allah”), “fighting for Allah” is one of the eight categories eligible for Zakat contributions. Since Catastrophic Failure explained this in detail in 2015, the language CAIR uses outside the firewall has become opaque. For a graphic explanation of CAIR’s jihad mission, see pages 362 to 367 of Catastrophic Failure or, for a more visual explanation, the extract from the 2009 PowerPoint briefing “Hidaya and Zakat and SCF Consequences.”

4. This builds to the fourth point. In 2016, Unconstrained Analytics, Inc began reframing the national security debate on counter-terrorism in “Defeating the Islamic Movement Inside the United States” (DIM). In promoting political warfare, DIM rejects War on Terror (WOT) / Countering Violent Extremism (CVE) narratives in favor of professional analysis based on recognized political warfare processes known to inform the strategies of both the Left and the IM.

True to blue pill form, both WOT and CVE narratives create the illusion of protecting America’s national security while overwriting political warfare perspectives that would better serve those interests.

Leading into the 2016 election, DIM relied on Iranian PressTV’s coverage of Khalilah Sabra’s speech at the December 2015 MAS/ICNA Convention in which she merged the Left’s racism meme with the Muslim Brotherhood’s revolutionary jihad rhetoric:

“We need to make a conscious admission to ourselves that Black Lives Matter . . . We are the community that staged a revolution across the world. If we can do that, why can’t we have a revolution in America? . . . You know what you should do. And if we do it, Allah has promised us the same victories that he granted to those who came before us.”—Khalilah Sabra (DIM, 25)

MAS (the Muslim American Society) and ICNA (Islamic Circle of North America) are associated with the Muslim Brotherhood. In a Twitter text just days after the 2016 presidential election, Hussam Ayloush, Executive Director of CAIR-LA, said:

“Al-Shaab yureed isqat al-nizaam” was the Muslim Brotherhood’s call for incitement during the Arab Spring that translates as “the people want to topple the regime.” (DIM, 25)

Looking to historical American political antecedents for precedence distorts what is happening while obscuring the coordinated international united front nature of the attacks.

There is nothing American about this.

For example, from the December 2018 al-Araby (Google translated) article “From the Streets of Paris . . . The People want to Overthrow the Regime,” the slogan claimed by CAIR is the same as the one the Muslim Brotherhood used in the midst of the violent Giliets Jaunes (Yellow Vests) protests in France. As the examples in the article demonstrate, Islamic Movement narratives were on-message. A review of those Tweets is well worth the time. Is this Minnesota’s future? 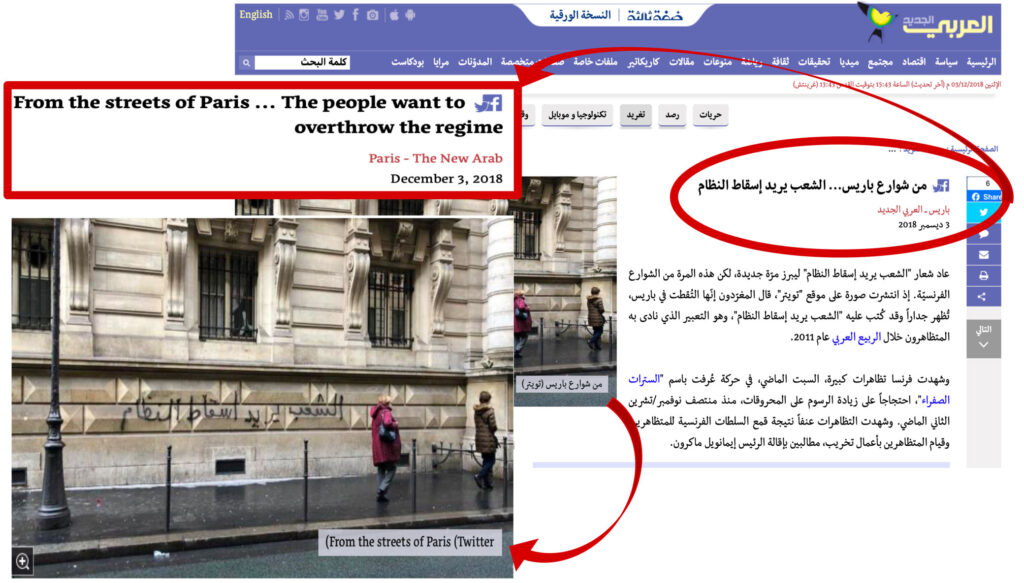 Both the Muslim Brotherhood writ large and CAIR have clearly expressed their revolutionary intentions regarding the American electoral process. Yet, this is the organization that Minnesota’s Attorney General raises funds for in the run-up to the 2020 election. At the same time, there is little question about the revolutionary role the Left intends to play in this election cycle.  As George Soros recently stated:

“Even before the pandemic hit, I realized that we were in a revolutionary moment where what would be impossible or even inconceivable in normal times had become not only possible, but probably absolutely necessary.”—George Soros (Life Site News, May 15, 2020)

With Ellison’s specific alignment to the neo-Marxist Antifa and the Hamas inspired CAIR, it’s hard to reconcile the “support and defend” mission of Minnesota’s Attorney General with the overt revolutionary intentions that he signals. A red pill assessment of where Ellison will come down on this seems reasonably straight forward.

What seems almost as clear is that the ordinary people of Minnesota are so mired in blue pill enforcement narratives that they hardly perceive how far the far-Left has tilted the state.

From a blue pill perspective, narratives enforce the perception that this is little more than overly partisan overly liberal politics as usual—re-enforced through facially neutral blue pill narratives.

From a red pill perspective, this takes on the dimensions of a fully deployed counter-state operation preparing to transition to an exploitation phase.

Is there reason to think that Ellison is a political outlier in Minnesota?

If the political climate turns turbulent in Minnesota, one wonders what will happen if average citizens take to the streets. One thing seems certain, in a year in which the neo-Marxist Left and the Islamic Movement have signaled their intent to operate in united front efforts to leverage racism narratives to escalate their radical agendas, the State of Minnesota seems uniquely positioned to impose that agenda both from within and from without. Constitutions be damned. It’s the cost of living a blue pill life during revolutionary times.

Is this a requiem for Minnesota or a warning?

“I think the case that the president is making—and that may be up for debate in this country—of deeming houses of worship essential, essential services and that’s one that we take into consideration.”

—Minnesota Governor Tim Walz, May 23, 2020
the Democrat governor said during an hour-long briefing on opening up religious services during the coronavirus lockdown

“There is no pandemic exception to the Constitution of the United States or the Free Exercise Clause of the First Amendment.”

Congress shall make no law respecting an establishment of religion, or prohibiting the free exercise thereof; or abridging the freedom of speech, or of the press; or the right of the people peaceably to assemble, and to petition the government for a redress of grievances.

HOW SHOULD I VOTE?

IS THE FBI WAITING UNTIL AFTER THE ELECTION TO ADDRESS WHISTLEBLOWER PHIL HANEY’S VIOLENT DEATH?

Democrats and the Politics of Projection