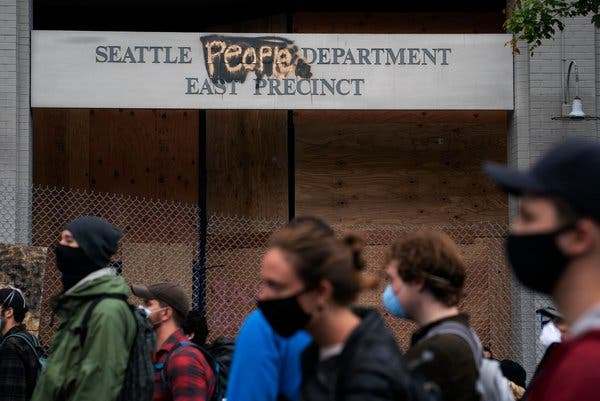 It is important as a primer not to conflate ANTIFA with Black Lives Matter, although there is certainly video evidence that ANTIFA has allied with BLM in many situations. By the way, for your pleasure, here is the author of  The Anti-Fascist Handbook, Mr. Mark Bray.

ANTIFA does however receive grants from Soros and likely Tom Steyer.

Anyway, so the objective here is to concentrate on Black Lives Matter as the movement has become much more aggressive and radical.

According to historian Harvey Klehr, the NLG was allied with the Communist Party; in the 1930s a significant number of NLG founders had been members or fellow travelers of the Communist Party USA,[14] including Riemer and Joseph Brodsky of the CP’s International Labor Defense auxiliary.[10] During the McCarthy era, the NLG was accused by Attorney General Herbert Brownell Jr. as well as the House Un-American Activities Committee of being a Communist front organization.[15]

In 1937, Allan R. Rosenberg joined the NLG and remained a member as a late as 1956 during his second appearance before HUAC.[16] 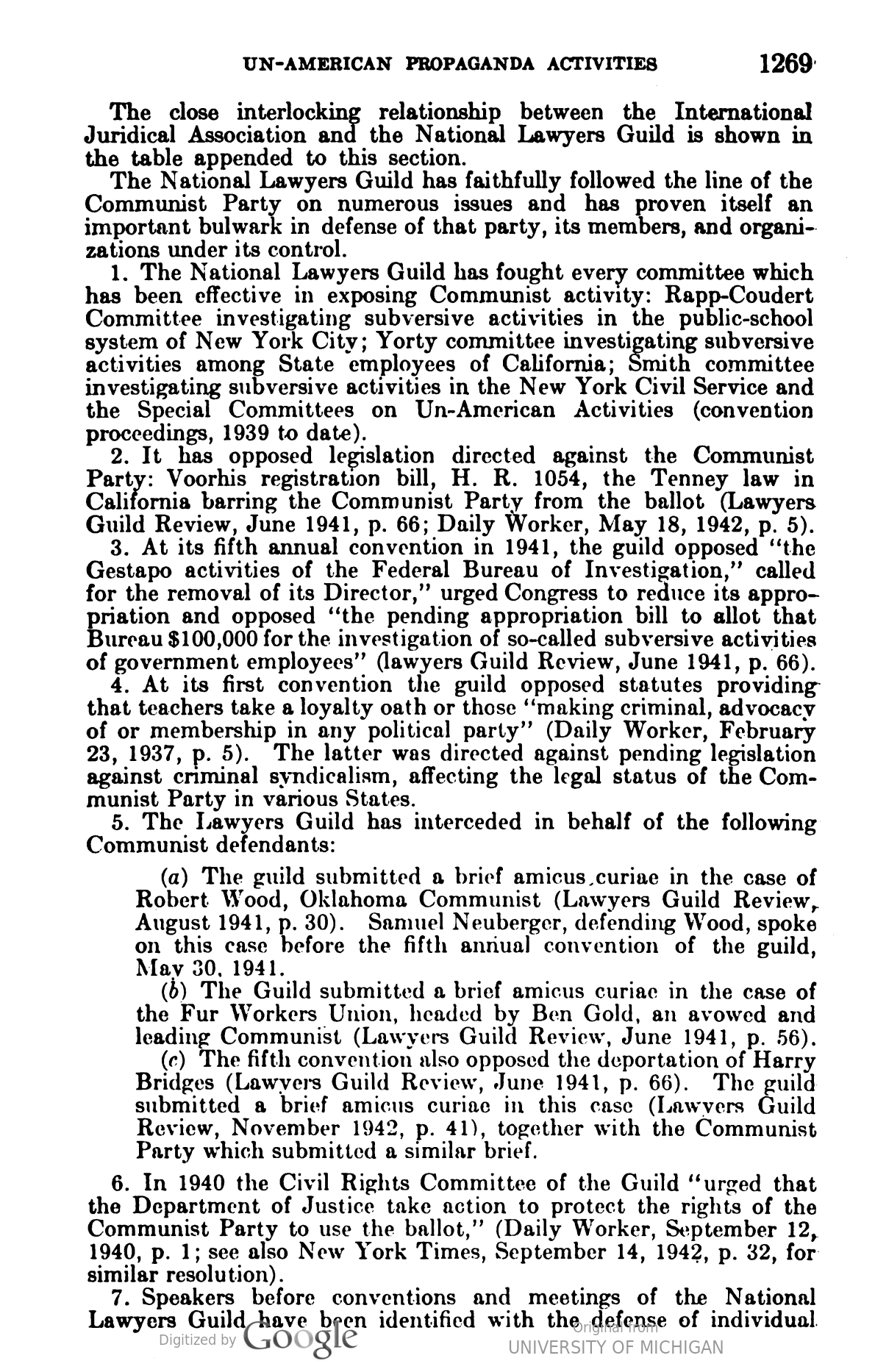 And that same radical platform is here today:

Guild attorneys, legal workers, law students, and other members continue to collaborate in sharing experience and expertise in the form of working groups, study groups, and social groups. Chapter events like happy hours and the annual Disorientation workshop for law students at area law schools, provide an environment where progressive, radical, and left-wing attorneys can network, share experience, and pass on wisdom.

Guild members are defending activists, representing immigrants facing deportation, testifying in federal and state legislatures against civil liberties cutbacks. They are using their experience and professional skills to help build the 21st Century grassroots movements that are and will be necessary to protect civil liberties and to defend democracy now and in the future.

There are chapters across the country. When San Francisco elected Chesa Boudin to District Attorney when he is a member of the NLG, you must determine if the DA in your area is as well. You see, they have events where Chesa Boudin is a keynote speaker:

Progressive Law Day is a free day-long conference, organized and led by law student members of the National Lawyers Guild, San Francisco Bay Area Chapter, and open to legal workers, lawyers, activists, and anyone interested in learning about radical lawyering and legal work.

Radical is right, in fact, it is referenced on several of their associated websites.

MDC members in chapters across the country provide trainings, assistance in setting up temporary legal offices and legal support structures, and materials for supporting activists engaged in mass protests.

The National Lawyers Guild can provide the following legal help to progressive organizations:

Did you notice the item of legal observers? Well, the NLG does dispatch several observers to protests to not only advise but to capture video in or out of context at protest or demonstration events.

After training you can request observers…

Then there is the ubiquitous debate, rather attack on ICE:

In addition to calling and tweeting at ICE to demand the release of individuals in detention, for which you can use this FlattenICE toolkit (bit.ly/flattenICE), you now can write letters — no stamps or envelopes needed — with this Google Form!

While acting to #FlattenICE, use this great sustainable call-ins graphic (thanks to Havannah and Hien from APSC, also on p. 8 of the FlattenICE toolkit) and remember to TAKE CARE OF YOURSELF.

Perhaps you are beginning to understand this all now right? Hold on there is yet another law firm you should know about.

But first, we need to once again introduce Soros in the mix, of course. A nefarious division of his work is the Center for Popular Democracy. Got it? Okay, read on.

There is this law firm known as Law for Black Lives. Law for Black Lives is a national community of radical lawyers and legal workers committed to transforming the law and building the power of organizing to defend, protect, and advance Black Liberation across the globe. Now you know why the protests went world-wide, they are coordinated.

The Executive Director is Marbre Stahly-Butts.

Marbre Stahly-Butts is a former Soros Justice Fellow and now Policy Advocate at the Center for Popular Democracy. Her Soros Justice work focused on developing police reforms from the bottom up by organizing and working with families affected by aggressive policing practices in New York City. Stahly-Butts also works extensively on police and criminal justice reform with partners across the country. While in law school, Stahly-Butts focused on the intersection of criminal justice and civil rights, and gained legal experience with the Bronx Defenders, the Equal Justice Initiative, and the Prison Policy Initiative. Before law school Stahly-Butts worked in Zimbabwe organizing communities impacted by violence, and taught at Nelson Mandela’s alma mater in South Africa. Stahly-Butts is a city council designee to the Board appointed by Mayor Bill de Blasio.***

Law for Black Lives and the Center for Constitutional Rights hosted a webinar on April 16th focused on the use of militarization, criminalization and surveillance during times of crisis. While many of us work tirelessly to support our families and communities, the Government is laying the groundwork to turn this health crisis into a criminalization crisis. We have already seen the DOJ request additional detainment powers, Congress funnel almost a billion dollars to local law enforcement agencies and cities across the country to use police to enforce stay at home orders. Join us for  a discussion about the current response. Panelists will provide insight about past abuses of power- from Katrina to 9/11. Together we will explore how lawyers and organizers have mobilized to mitigate the harms of criminalization and the way forward in this moment. If you missed the webinar, check out the recording below!

The rest is up to you to connect more of what you find. Perhaps since the United States fought wars to defeat communism, it may be prudent to demand the IRS terminate the non-profit status of the National Lawyers Guild as just a start and counter-measure.

Meanwhile of course, while Black Lives do Matter, the same goes for any life in America. One has to consider if the BLM movement is at the expense of all other races or classes and is a threat to civil society. Just take a long look at Seattle, Oakland, or New York to answer that question. Maybe even the University of Miami Law School can shed some light on the subject. They teach a course.

In Spring of 2018, the School of Law will be convening an interdisciplinary course called “Race, Class, and Power: University Course on the #BlackLivesMatter Movement.”

The course will engage the multiple lenses through which the #BlackLivesMatter movement, and racial justice in the United States might be explored, including policing and criminal justice, comparative inquiry regarding race and identity, theories of social movements, education reform, cognitive psychology, healthcare and medicine, education and child welfare, incarceration and public health, literature and artistic expression, law and legal reform, environmental justice, and more.