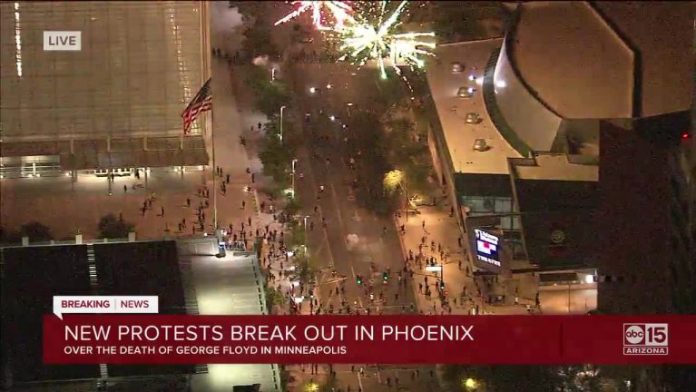 Things in this war are moving quickly right now and our enemies are out maneuvering the police, military, and federal agencies.  Truthfully, its not even a contest.  Our government at the local, state, and federal level is an embarrassment.

This article is meant to help the reader put everything happening on the streets of America into a framework that can be understood so readers can make thoughtful decisions on what is best for your families and communities.

Remember this is a war of narratives.  The media is making everything appear worse than it is because the goal is to create chaos so that Americans demand ORDER.  To be sure, the situation is bad. All components of the federal government are penetrated by communists and jihadis influencing decision-making, policies, and are, in many cases, driving the train. City councils in mid-level and large cities across America are controlled by Marxists/communists and, therefore, police chiefs of these cities are Marxists or stooges for the Marxists to whom they report.

Evidence of that is the large number of chiefs who publicly bow down to the communists of Black Lives Matter in the streets.

The chaos being created is being done for a reason. Communists and jihadis know how to bring order to a community. However, that “order” comes with slavery, depravity, and poverty.   Please do not make the mistake of thinking “It can’t happen here” in the U.S. because it IS happening here.

Here are a few things UTT believes are important for Patriots to understand regarding what is happening:

1.  Black Lives Matter (BLM) is a COMMUNIST organization.  Our colleague Trevor Loudon, who is one of the best resources for communist networks in the U.S., has this to say about ongoing events:  “Two pro-China communist parties – Freedom Road Socialist Organization (FRSO) and Liberation Road are playing leading roles in coordinating the often-violent protests now occurring across the United States.”  FRSO is clear on their website they are a part of the effort to create a communist system in America. The 3 founders of BLM are Alicia Garza, Patrise Cullors, and Opal Tometi.  Alicia Garza has held executive leadership positions in NDWA, POWER, SOUL, and RTTC, all FRSO organizations. Opal Tometi is seen in the below photo with Venezuela’s communist dictator Nicolas Maduro. Patrise Cullors has called for BLM members/followers to “rise up” and “burn everything down” in cities across America. BLM was founded by Marxists/communists born from the leading communist organization in America today – Freedom Road Socialist Organization.

2.  The violent riots are all about control of the state and power.  The riots in the U.S. were never “peaceful protests” which were “hijacked” and they have nothing to do with a black man who died in police custody in Minneapolis.  The riots have always been communist led riots – Black Lives Matter – working with the U.S. Muslim Brotherhood and terrorist groups like Hamas doing business as CAIR (Council on American Islamic Relations).  Other MB groups like ISNA and ICNA are also working with the communists at the ground level.  The Communist/Islamic Counter-States were waiting for a flash point to use to launch their offensive.  The incident in MN provided that.

3.  The basis for why the rioters are doing what they are doing is a lie.  The communists/jihadis behind the nationwide protests have and are consistently lying about every part of what they are doing.  They lied about George Floyd – who had a long violent criminal history and several drugs in his system at the time of his arrest including Methamphetamine.  They lied about systemic racism in America – statistics across the board demonstrate that is a flat out lie.  And, they are lying about what they want.  They don’t want justice, they want control.

4.  Lenin’s Useful Idiots are still soldiers in the enemy’s army.  Since this is a war of narratives and the communists & jihadis have nearly complete control of the narratives, it is imperative to speak truth boldly about these threats as described above and NOT use enemy narratives.  When people like George W. Bush, Nikki Haley, SECDEF Esper, General Mattis, Admiral Mullen, Mitt Romney, and police chiefs across America talk about “systemic racism” or get on their knees at the communist events, they become what Vladamir Lenin called “Useful idiots.”  The problem is that useful idiots are a part of the communist army whether they intend to be or not and they advance the communist movement, whether they intend to or not.  That means they are enemies of liberty and of Constitutionally-minded Patriots.  These traitors should keep that in mind as the situation on the ground level deteriorates.

5.  The Brown Shirts will be replaced by the Black Shirts.  Black Lives Matter and Antifa thugs are today’s “brown shirts.”  They are the leading edge of the violent revolution in America.  As the communist/jihadi movements advance, there will come a time they will need to appear as if they are normalizing their activities.  The Brown Shirts (Antifa/BLM) will be eliminated by the Black Shirts, who most likely will be the jihadis as the jihadis prepare to take over.

6.  Believe what you are seeing.  In Minnesota, the Minneapolis City Council is poised to dismantle the Minneapolis Police Department.  Jihadi Attorney General in MN is Keith Ellison.  Ellison is a suit-wearing jihadi who is close friends with U.S. Hamas leader Nihad Awad and raises money for terrorism. If the police department is defunded and shut down, a “civil security” group will be formed that will, initially, have a happy face on it.  Rapidly, however, it will become an overtly sharia-police force and Minnesota will become an Islamic State under the control of Keith Ellison. See unrealistic?  Keep these two things in mind: (1) UTT has yet to be wrong on these matters, and (2) if we told you 3 months ago what would be happening today many of you would have said “that’s unrealistic.”

It is time for Americans to confront their leaders and confirm whose side they are on – the communists/jihadis or law abiding Patriots. Make them answer the question.

Most importantly, allow UTT to teach & train you how to build a team at the local level to raise and army of Patriots to defend your families, communities, and liberty.