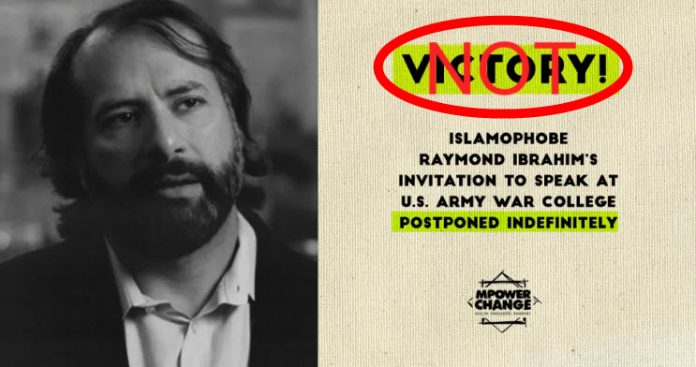 Frontpage Interview’s guest today is Raymond Ibrahim, a Shillman Fellow at the David Horowitz Freedom Center.  He is the author The Al Qaeda Reader (2007), Crucified Again: Exposing Islam’s New War on Christians (2013), and Sword and Scimitar: Fourteen Centuries of War between Islam and the West (2018).   He has appeared on C-SPAN, Al-Jazeera, CNN, NPR, and PBS; his writings have appeared in the New York Times Syndicate, the Chronicle of Higher Education, Jane’s Islamic Affairs Analyst, Los Angeles Times, Washington Post, and Financial Times.  A sought after speaker, Raymond has briefed governmental agencies, including U.S Strategic Command, lectured at the National Intelligence University, and testified before Congress.

Glazov: Raymond, nearly a decade ago, on May 18, 2011, you and I did an interview titled, “Ibrahim 1, CAIR 0 by KO.”   It dealt with how the Council on American-Islamic Relations (“CAIR”) relentlessly tried to cancel your lecture at Everett Community College in Seattle—and failed, miserably.   Recent events have prompted a repeat interview, as you are now 2 to 0 in your battle with the Islamist outfit. Congratulations on that.  Tell us a bit about what happened—how CAIR initiated another smear campaign and thought it had gotten its way, only to have mud thrown in its face.

Ibrahim:  Sure, Jamie, and thank you for the opportunity.

As we all know, CAIR—that unindicted coconspirator in the largest terrorist funding case in U.S. history—is the politically active mouthpiece for the Muslim Brotherhood’s Hamas; it is well entrenched in various points of influence—thanks in particular to the Obama era—and does indeed often gets its way.

In January 2019, the U.S. Army War College (USAWC) invited me to come and lecture on my most recent book, Sword and Scimitar.  About a week before the scheduled date (June 19, 2019), CAIR and its leftist allies launched what even neutral reporters called an “unprecedented” attack—consisting of press releases, hysterical petitions, and several direct phone calls to and meetings with the heads of the USAWC—all in an effort to pressure them to cancel my talk.  Here, for example, is a snippet from CAIR-ally Linda Sarsour’s petition (underlining in original):

The U.S. Army War College invited Raymond Ibrahim—a well-known Islamophobe and disseminator of inaccurate, ahistorical, anti-Muslim rhetoric—to speak…   Ibrahim’s rhetoric … normalizes and justifies violence against Muslims, which is already a burgeoning problem for the military…. Let’s tell the U.S. Army War College: If you don’t rescind Ibrahim’s invitation and denounce his Islamophobic rhetoric, you’re not only endorsing anti-Muslim hate, but dangerously nurturing Islamophobia and white nationalism within the military.  Just a few days ago, California Rep. Duncan Hunter … casually admitted that he and his unit “killed probably hundreds of civilians…probably killed women and children in Iraq.”  Tell the U.S. Army War College: Ibrahim’s lecture would push the same kind of incendiary, Islamophobic rhetoric that has led to violence inflicted on Muslim communities—both in the U.S. and abroad.

As a result, the USAWC informed me a few days before our long scheduled event that they were “postponing” it—that is, in effect, canceling it.  CAIR and its allies responded by gloating and, in the case of  Jacob Bender, CAIR-Philadelphia Executive Director, making more demands.   One “Mikey” Weinstein seemed especially well pleased with himself and issued a statement to that effect:

The Military Religious Freedom Foundation [which Weinstein heads] congratulates the U.S. Army War College (USAWC) for canceling the invitation to have the Islamophobe Raymond Ibrahim speak … This move was precisely the right thing to do….  I had several excellent in-depth conversations, over a period of 4 days, via telephone and related texts with the USAWC Commandant, Major General Kem. I found him to be exceptionally reasonable, personable, rational and courteous. I laid out in detail MRFF’s just grievances with Mr. Ibrahim’s tragic brand of base, evil and vile, anti-Muslim prejudice and hatred.

MRFF is encouraged and hopeful that the USAWC will exercise extreme due diligence and equitable discretion in any future matters regarding Mr. Ibrahim or inviting speakers of his hateful, racist ilk to address its renowned faculty, staff, and prestigious student body of stellar national and international military leaders.

It was not long, however, before the USAWC reached out and tried to reschedule me.  We settled on February 26, 2020—a date expected to draw even more students than the original and less-than-ideal summer date of June 19.  Once the announcement was made, CAIR and its allies began another barrage of protests, petitions, press releases, and appeals to get my rescheduled event canceled. This time all their pleas fell on deaf ears.  The talk went as planned, with no problems. Major General Kem—the same man Mikey Weinstein spent “4 days” pleading with to get me canceled—greeted and spoke with me, before sitting in the front and center row for the duration of my hour-long talk.  (Click here for more on how the event went.)

Ibrahim: Thanks, Jamie.  The re-invitation was motived by a few factors.  First, and as someone well acquainted with the federal government’s overly bureaucratic vetting process from my years at the Library of Congress, had there been any real concerns with me or my credentials, the USAWC would never have invited me in the first place.  Instead, the initial postponement/cancellation seems to have been a kneejerk reaction by the USAWC at being so unexpectedly denounced as “racist” and “Islamophobic.”  Once they got CAIR, et al. off their back and had reassessed the situation, they quickly confirmed that the negative accusations against me were baseless and made it a point to reconnect with me.  After all, in a report titled, “Not Qualified: Exposing the Deception Behind America’s 25 top Pseudo-Experts on Islam,” even CAIR’s sister organization, the Muslim Public Affairs Councils, begrudgingly admits that, along with Daniel Pipes, only I have “the formal and verifiable academic credentials to be classified as an expert.” Moreover, in all of CAIR’s press releases and petitions against me, not once could they cite anything specific about Sword and Scimitar—which is what I was invited to speak about—to support its accusation that it “is based on poor research.”

More significantly—if not scandalously—by postponing/canceling my originally scheduled date in an effort to appease special interests groups—namely Islamists and leftists—the USAWC angered a significantly greater segment of the American population: many individuals, groups, and media came to my support*—that is, came to the support of free speech and academic inquiry on an important subject. As just two examples, the National Association of Scholars sent a petition letter to Donald Trump, signed by about five thousand people, including many university-affiliated scholars; and Rep. Scott Perry (whose PA jurisdiction includes the USAWC) and nine other congressmen sent a strongly worded letter of concern to the USAWC.

Glazov:  In other words, CAIR shot themselves in the foot and, instead of getting you canceled, merely exposed their freedom-hating schemes?

Ibrahim: Exactly, Jamie.  In an effort to silence free speech on Islam, they only succeeded in drawing lots of unwanted attention to their subversive tactics.  As a result, my event was so packed that I heard it was second only to a Buzz Aldrin event in the crowds it drew.  For this, I thank the failures at CAIR and company—particularly Jacob Bender, Linda Sarsour, and Mikey Weinstein—for all the free publicity and general buzz they created.

Glazov: Hilarious, Raymond—and well said!  Question: It’s my understanding that you’ve given many other talks, including at venues such as the USAWC.  Why did CAIR choose this one—about, of all things, military battles from over a millennium ago—to launch an all-out campaign against you, nearly a decade after their first failed attempt against you in Seattle?

Ibrahim: Great question, Jamie.  I think because they’re smart enough to know what’s at stake.  You see, unknown to most, the greatest apologia for politically active Islamists and their leftist allies—and the first premise for all subsequent apologias for Islam—is purely historical in nature.   So long as the people of the West believe that Islam was for centuries an advanced, enlightened, and tolerant force, especially in comparison to premodern Europe—which is the mainstream perspective, even among many critics of modern day Islam—so long must all the violent and horrific things being committed in its name be chalked up to other factors—economics, grievances, territorial disputes (Israel), education, politics—even a “lack of jobs,” to quote the Obama White House—never Islam itself.

Such logic is admittedly sound—but only if one subscribes to its first premise, that Islamic history is largely progressive and tolerant.  But for those who become acquainted with Islam’s true history vis-à-vis the West—a history of virtually nonstop jihad and mindboggling atrocities that make ISIS appear tame, as Sword and Scimitar and the talk about it at the USAWC make unequivocally clear—there is no “what went wrong?” or “why do they hate us?” to figure out, only an unwavering, continuous line of violence and enmity.

From here one can see the importance of safeguarding the current narrative of a historically “advanced” and “tolerant” Islam.   Or, as George Orwell so presciently put it in his 1984—and as CAIR and the left well know—“Who controls the past controls the future.”

Glazov: Well, Raymond, congratulations again on your undefeated record—now 2 to 0—against CAIR and the Left; and for delivering such a critically-important message to the U.S. Army War College.  You are a true warrior for liberty and truth in our perilous times.  Was your talk recorded?

Ibrahim: Thank you, Jamie; it’s appreciated.   Yes, my entire talk was videotaped by the USAWC, and I was told that it would be made available to the public online.  I’ll keep you posted.

* I wish to thank the many people (civilian and military) who expressed their support, mostly through emails to me and/or the USAWC.  I also wish to thank the following organizations and media (named in no particular order) for drawing attention to and/or supporting my conflict against CAIR.  Apologies in advance to any individual or organization inadvertently left out:

Organizations: National Association of Scholars; Scott Perry, his chief-of-staff Lauren Muglia, and nine other Members of the U.S. House of Representatives; the Middle East Forum’s Washington Project; The United West; Sharia Crime Stoppers; and the Center for Security Policy.