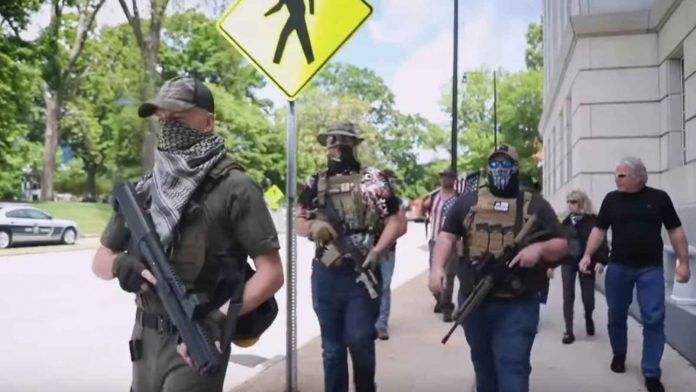 The case for an American Revolution Movement for Self-Defense.

As sub-nihilist mobs terrorize the nation, Democrats cheer on the violence, defund the police and hold the National Guard at bay. Americans have little choice but to protect themselves against the well-funded, highly organized forces of the left. When Americans do attempt to protect their lives and property, they find themselves all alone, like the couple in St. Louis, with no local or national network to back them up.

By now the need for such a network should be evident to all but the willfully blind. Let this writer suggest a form it could take: ARM, the American Revolution Movement for Self-Defense.

ARM would be dedicated to the preservation of gains the American Revolution secured, such as constitutional rights, and the protection of American lives and property. ARM would support the rule of law and oppose rule by the mob, a single political party, or some Great Leader.

On the information side, ARM would reinforce basic realities. All human beings are created equal and endowed by their creator with the rights to life, liberty and the pursuit of happiness. No moral defect accrues to any human being because of factors they cannot control, such as skin shade. Likewise, no person automatically gains status or privilege for the same reasons.

On the organizational side, ARM would connect Americans seeking to defend themselves and their nation against those now inflicting violence and terror. For example, since police will not respond, the couple in St. Louis threatened with death by a violent mob could tap local and state ARM members for backup.

When anti-Semitic mobs show up to vandalize synagogues and attempt to inflict a Kristallnacht on Christian churches, pastors and rabbis could tap ARM to hold off the attack. An ARM presence at political rallies would keep the sub-nihilists away. Call it a strategic defense initiative, a simple extension and reinforcement of what embattled locals are already doing.

As Jack Kerwick notes, in the Bronx, the Italian-American community warned would-be troublemakers, who “decided to make no trouble in this neighborhood.” Bikers from the Hell’s Angels and Mongols made Antifa a no-show in Placerville, California. In San Luis Obispo, when the Vagos and Molochs rolled in, no looting took place.

In Los Angeles, armed Jewish citizens stood guard to insure that they would not be vandalized as have other synagogues and churches during the BLM-related riots. In Tulsa, Colorado Springs and Wyoming, armed citizens have taken a stand to protect innocents from harm and exercise their Second Amendment rights.  ARM would simply extend and support what these brave resistance fighters are already doing, and they are not alone.

Countless millions of Americans are on record that their great nation should endure and prosper. The ARM could hold rallies of its own and even lead a massive march on Washington to exercise rights under First Amendment, which is first for a reason and does not diminish the need for a Second Amendment. That is more apparent by the day as the election approaches. The time for rational persuasion is long past, and the shooting started long before the looting.

In June of 2017 in Alexandria, Virginia, Bernie Sanders supporter James Hodgkinson opened fire on Republicans as they played baseball, wounding Rep. Steve Scalise and four others. Had not U.S. Capitol and Alexandria police not taken down the shooter, Hodgkinson would have claimed many other lives. Defunding or eliminating the police would leave unarmed innocents open to violence and death on vast scale. Such a prospect leaves Democrats untroubled. As their supporters like to chant, “No Trump, no wall, no USA at all.”

As violence surges, mayors and governors keep the National Guard idle and the U.S. Military is sending signals of retreat. As all Americans might recall, the previous president, formerly known as Barry Soetoro, turned the national security establishment against “right-wing” Americans, smeared as extremists for supporting constitutional rights and limited government. That president’s FBI looked the other way as Islamic terrorist Nidal Hasan gunned down 13 at Fort Hood in 2009.

Long before the composite character president, the FBI deployed military force – snipers, tanks, and armored vehicles –  against Americans at Ruby Ridge and Waco. The FBI is essentially unreformed and no FBI official who took part in the coup attempt against President Trump has yet been brought to justice. If the military and FBI should enter the current fray, the side they would take is far from certain.

Democrats are already on their knees, joined by those Republicans who fear some pasty faced dance major from UC Santa Cruz will call them racists. And the police aren’t picking up the phone.

Those fighting back in these conditions are already part of an American Revolution movement. Call it ARM or whatever, a functioning national network will serve their cause and boost morale. If nobody steps up, all Americans will regret it. Maybe not today and maybe not tomorrow, but soon, and for the rest of their lives.