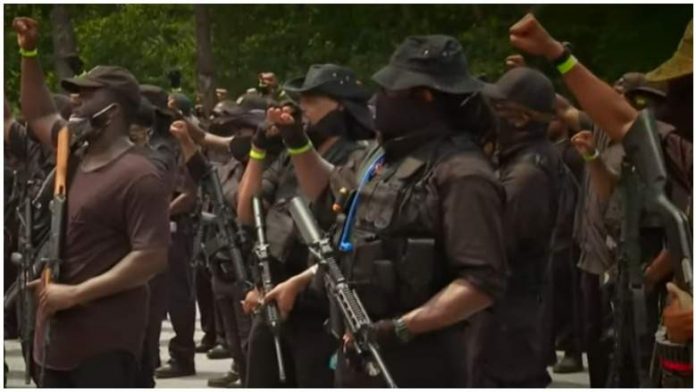 oughly 100-200 members of the Not F**king Around Coalition (NFAC) celebrated July 4 by showing up to Georgia‘s Stone Mountain Park to protest the presence of carvings of Confederate soldiers, WXIA-TV reported.

The members were armed with semi-automatic and automatic weapons, dressed in all-black and delivered strong messages aimed at white nationalists groups, such as the Ku Klux Klan.

The site is tied to the resurgence of the Klan in the 1920s and political candidates, as well as the NAACP, have supported the removal of the carvings, according to Atlanta station WSB-TV.

John Bankhead, the Stone Mountain Memorial Association’s spokesman, said the group came in at around 2 p.m. and the remained of the protest was largely orderly and peaceful, WXIA-TV reported. The group made its way to the north face of the mountain where Jefferson Davis, Robert E. Lee and Stonewall Jackson are carved, and explained why they chose that area, after which they moved on to Memorial Park:

Your threats don’t mean s**t to us. Y’all been threatening us since Birmingham, I ain’t seen s**t.

I don’t see no white militia, I don’t see any Boogie boys, you three-percenters and all the rest of you scary-a** rednecks. We’re here, where the f**k you at; we’re in your house.

During the protest, the north and western entrances to the park, as well as all attractions, were closed, MEAWW reported. [Enhancement added]

According to Newsweek, members of the group interacted with motorists asking “Who are you guys” to which they responded by asking about slavery reparations. The protesters held chants of Black Lives Matter,” “Black Power” and “Hands up, don’t shoot.”

Newsweek also reported that protesters said they wanted to exercise their right to bear arms:

“It’s life or death out here, that’s why we’re out here, day by day, practicing our Second Amendment right just like the white folks do,” one protester said, according to Newsweek, and another said, “We want change that’s really going to permanently help us, we don’t want [any] little change, we want some real change.”

Police, according to WXIA-TV, and the spokesman said the group did not pose any issues:

It’s a public park, state park. We have these protests on both sides of the issue from time to time. We respect people’s first amendment rights to exercise those rights. We understand the sensitivity of the issues here at the park and the dark past so we respect that and allow them to come in. As long as it’s peaceful, which it has been, then that’s fine.

In 1915, the United Daughters of the Confederacy gathered and hired sculptor Gutzon Borglum to design a confederate monument, the Associated Press reported. The 1915 movie, “The Birth of a Nation,” which portrayed the resurgence of the Ku Klux Klan, made Stone Mountain a prominent symbol as a burning cross was lit upon it Thanksgiving night.

The monument was finished and dedicated in 1970, attracting 10,000 people. An archived version of Georgia’s state website boasted that it was “home to the largest bas relief sculpture in the world.”

According to a New York Times summary of the Atlanta History Center, “a ‘neo-Confederate theme park’ grew around the mountain, replete with a plantation house, anodyne versions of antebellum life, and a ‘Gone With the Wind’ museum.”

Modern-day politicians, celebrities and people who enjoy going to Stone Mountain Park have called for the destruction of the 1.57-acre quartz monument. During her 2017, gubernatorial run, Stacey Abrams told WSB-TV, “It is 2017, and now is the time for us to have a conversation about removing the last vestiges of that type of hatred and that type of vitriol toward minority communities in Georgia.”

Abrams also tweeted about the issue, writing “Paid for by founders of the 2nd KKK, the monument had no purpose other than celebration of racism, terror & division… We must never celebrate those who defended slavery and tried to destroy the Union.”

The Tonight Show writer Chase Mitchell noted on Twitter that “Stone Mountain is a black neighborhood. A majority of Stone Mountain Park employees are black. It’s absolutely fucking insane they have to look at this shitty carving every single day.”

Others have also said they would not mind if the carvings were removed.

An expert who spoke to the Associated Press speculated that drilling holes into the mountainside and packing them with TNT could destroy the carvings. However, Ben Bentkowski, the president of the Atlanta Geological Society, said that it could cost $1 million, taking into account insurance, hazard pay and other costs.

Only Georgia’s state legislature or local governments can remove all Confederate monuments in the state, WSB-TV reported.