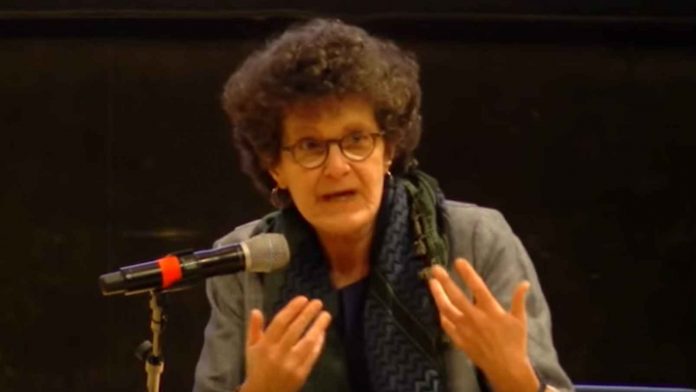 A reminder of leftist affection for murder and mayhem.

“There’s no way you can do any homework on Black Lives Matter and not see that it’s a Marxist political organization,” and the move to substitute a “black” nation anthem was “a communist political move.”  That was sports journalist Jason Whitlock in an interview with Tucker Carlson of Fox News this week, when more obscure information about BLM emerged.

Convicted terrorist Susan Rosenberg (pictured above) is vice chair of Thousand Currents, a California-based charity that handles fundraising for Black Lives Matter. Rosenberg is a veteran of the May 19 Communist Organization that carried out bombings in the early 1980s to counter President Reagan’s “Morning in America” campaign. Rosenberg landed on the FBI most wanted list and was arrested with stolen explosives in 1984.

The terrorist drew 58 years but served only 16 because in 2001 President Bill Clinton commuted Rosenberg’s sentence. Since 2016, Rosenberg has been involved with Black Lives Matter, now openly recognized as a Marxist organization making communist political moves. One of those moves, supported by prominent Democrats is to defund the police, but BLM Philadelphia boss YahNé Ndgo is taking that to a new level. “One of the things that we are demanding over five years is the complete abolition,” she told Fox News Tuesday. “We don’t want to see any police in our community.”

Black Lives Matter has made a hero of Joanne Chesimard (aka Assata Shakur) who murdered a New Jersey state trooper, escaped prison and fled to Cuba. As Atlanta and Chicago confirm, murder is becoming more common in communities where Black Lives Matter operates, and the abolition of police would make it more so. As it happens, in Communist doctrine and practice, murder is necessary for social progress.

The independent Ukrainian farmers known as kulaks resisted Stalin’s collectivization plan. Stalin murdered them by the millions in a planned famine that Walter Duranty of the New York Times claimed did not exist. American Communist Anna Louise Strong championed the elimination of the kulaks as a class. Stalin knew that one death is a tragedy and a million deaths a statistic, and Mao Zedong followed suit. His cultural revolution and man-made calamities claimed a big part of the 94 million deaths under Communism in the past century.

In China during the cultural revolution, “mutant social growths were identified and unceremoniously uprooted.” That is from China: People-Questions, published by the National Council of Churches in 1975 and edited by Michael Chinoy, once a correspondent for CNN. The NCC book contends that there will be more cultural revolutions as China moves “in a socialist direction.”

From 1975 until 1979 the Khmer Rouge claimed the lives of up to two million people out of a population of roughly seven million. For the full story see Murder of a Gentle Land: The Untold Story of  Communist Genocide in Cambodia, by John Barron and Anthony Paul. The Killing Fields movie, from 1984, showed none of the actual killing. Out of sight is out of mind, and ignorance of Communist atrocities remains a problem.

Should some kind of Communist regime take power in the United States, the killing fields would be vast indeed. For the left, at home and abroad, the United States has always been the main enemy. The motive is there and given the means and opportunity, those mutant social growths, conservatives, and Judeo-Christian types, with their traditional values, would have to go. In a way, the cultural revolution is already in progress.

America is attacked 24/7 as an inherently unjust and racist society, never a great country and beyond all prospect of reform. Like the Khmer Rouge, the left longs for the “year zero” of their utopian socialist dreams. Violent thugs extract cringing confessions of “white privilege” and “inherent bias.” In cities and states controlled by Democrats, police and politicians tend to look the other way. Embattled Americans, isolated by the pandemic, push back as best they can.

As he confirmed in his Mount Rushmore speech, President Trump wants to prevent the left from destroying America. That is welcome news, but problems may arise in the correlation of forces.

Back in the 1990s, the FBI deployed snipers, armored vehicles, helicopters and tanks at Ruby Ridge and Waco. In 2020, with Antifa taking over parts of cities, widespread arson and looting, and the murder of police officers, the FBI remains absent from the front lines. Murder is on the increase and Susan Rosenberg is heading up the fundraising for Black Lives Matter.

Former New York Police Commissioner Bernard Kerik told Tucker Carlson the DOJ needs to start looking into BLM. No such action is evident, and despite the efforts of the allegedly intrepid John Durham, none of the DOJ and FBI bosses in the coup attempt on President Trump has been brought to justice.

As the election approaches, leftist violence is certain to surge. Will the FBI and DOJ continue to take a knee? Will BLM and Antifa be declared terrorist organizations? As President Trump says, we’ll have to wait and see what happens.

The Political Influence of Billionaires

Why is Bill Gates buying up farmland across America?

STOLEN ELECTION – HOW IT HAPPENED: The Secret History of the Shadow Campaign That Saved the 2020 Election