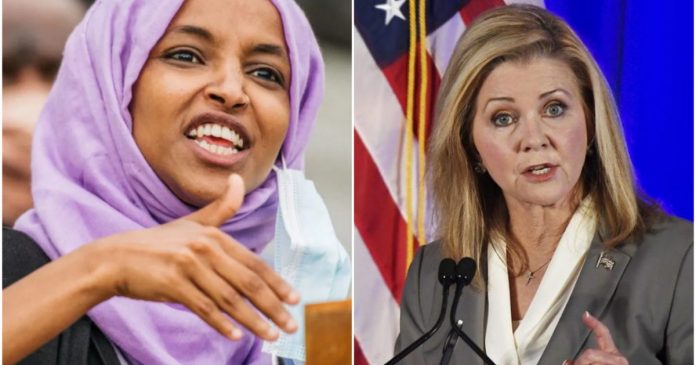 Omar appeared to refer to the American economy and political system as “oppression.”

Tennessee Senator Marsha Blackburn called upon Minnesota Democrat Congresswoman Ilhan Omar to resign from office on Tuesday, hours after Omar had appeared to endorse the “dismantling” of the American “economy and political systems,” calling them a “system of oppression.”

“As long as our economy and our political systems prioritize profit without considering who is profiting, who is being shutout, we will perpetuate this inequality. We cannot stop at the criminal justice system. We must begin the work to dismantle the whole system of oppression wherever we find it.”

Omar had made the remarks in the context of arguing that Democratic “criminal justice reform” was insufficient to answer the demands of the Black Lives Matter movement, calling for a more dramatic and wide-ranging restructuring of American society.

Blackburn called on the Minnesota freshman Democrat to resign hours after the anti-American speech in a tweet, stating that Omar could no longer credibly follow her oath to preserve the Constitution after referring to the American system broadly as a “system of oppression.”

Omar’s grandfather Abukar Omar had served as a government official in the dictatorship of Siad Barre in Somalia, and the Omar family sought political refuge in the United States when the Barre dictatorship-known for its human rights abuses and a mass killing of minorities thought of by some as a genocide- was overthrown in a civil war.