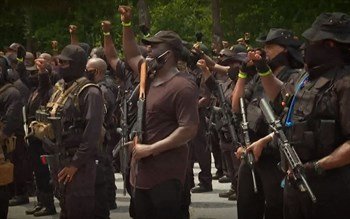 On America’s Independence Day this year, a family-friendly attraction in the South became the site of a heavily armed black militia, spewing profanity and threats of violence.

On the 4th of July, according to Newsweek, up to 1,000 men and women descended upon Stone Mountain Park, near Atlanta, Georgia. The park – Georgia’s #1 tourist site – features a Confederate Memorial Carving, including the chiseled images of Civil War generals Stonewall Jackson and Robert E. Lee, as well as President Jefferson Davis.

OneNewsNow spoke to Tom Trento, the founder and director of The United West (TUW), about what transpired on that hot summer day. Trento considers the 4th of July weekend to be a “significant weekend” and the site of the park a potentially “significant location.” While he says it is disputable, some people believe “the [Ku Klux Klan] got their inspiration from [the site] and have their origins in the area.”

According to Trento, John Fitzgerald Johnson (aka “Grandmaster Jay”), the “self-proclaimed leader” of the armed militia, specifically chose the site of Stone Mountain to provoke white nationalist groups in the area. Fitzgerald, born in 1961, is a veteran, an ordained pastor, and once ran as an independent for president of the United States in 2016. And according to the United West founder, the “sexy title for his black militia” is NFAC (the “F” stands for a profanity).

Trento describes Fitzgerald as “intelligent, extremely dynamic, [and] extremely charismatic” – and considers his appearance at Stone Mountain to be “unique, crossing a line to take the position of wanting to be the leader of armed black people to fight white people in a racial war.”

“Is this serious?” the TUW founder asks. “Is this for real?”

Trento continues, describing Fitzgerald as a “showman” and suggesting “he’s looking for press.” After a falling out with Black Lives Matter in recent years, Fitzgerald is “[wanting] to go beyond platitudes, placards and signs, and made a number of scary statements on the 4th of July weekend,” according to Trento.

“He is done with signs, [as] you don’t bring signs to a gunfight,” he adds – arguing that is why this particular black militia chose to carry a variety of firearms, including shotguns, AR-15s, and other high-powered rifles.

“The current climate [of racial tension] has gone beyond any rational explanation, [becoming] a movement that believes in systemic racism in the United States — which is completely nonsensical,” Trento concludes.

Nonetheless, he is saddened and considers it unfortunate that literally millions of black people still believe so strongly in systemic racism. “[Many of them] are angry, getting angrier, and [their frustrations] are fed by the Democratic Party and the media,” he describes.

Trento says metaphorically “they are gasoline” – and “as that crowd increases, just envision thousands of gallons of gasoline.” And John Fitzgerald Johnson, he says, is “the proverbial spark, the match that could ignite them.”

Trento suggests Fitzgerald’s “charisma and intelligence [could possibly] lead the useful idiots to go and do a tremendous amount of damage.” He is reminded that while the Black Panthers in the 1960s began as “just a bunch of thugs, [they were] transformed into a terrorist organization, literally blowing up various building and killing cops in the U.S.”

Law enforcement is capable of solving the problem, Trento argues. Intelligence agencies and law enforcement are “pretty good at mapping these people out very quickly and moving internally to bust them up.” He also contends that when laws are broken, arrests should follow – “and when the book is thrown at [such criminals], they’ll start singing like a bird.”

“What we don’t want is a race war,” he emphasizes. “The last thing we want to have is a shooting war with white militias fighting black militias.

“There are communists behind this whole thing who really want that, but the greater majority of American people do not.” Instead, he argues these groups need to be “broken up internally and put out of business.”

Editor’s note: Image above taken from video by WWL-TV, a CBS affiliate in New Orleans.