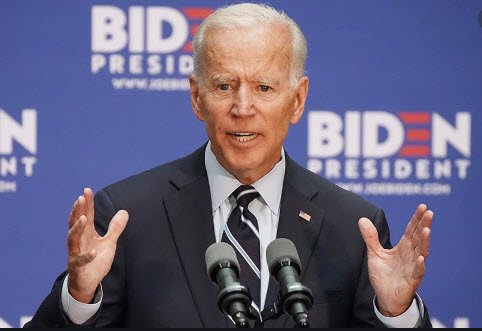 For someone who claims to want to rebuild the middle class, Democratic presidential nominee Joe Biden’s spending plans would almost certainly do the exact opposite.

“We are trapped in a care-giving crisis, within an economic crisis, within a public health crisis. You’re doing everything you can, but this president is not,” Biden tweeted Tuesday in announcing his latest outrageously expensive proposal, a “caregiving” plan that would cost $775 billion over 10 years.

Some of Biden’s other plans focus on the climate, health care, higher education, infrastructure and criminal justice reform, to name a few.

The slate of proposals is like the “old” Green New Deal, but this time coming from someone who’s supposed to be a “moderate.”

Of course, considering that Biden has had four decades in politics to work on these expensive policies, it’s fair to question why he hasn’t previously tried to implement any of them.

Together, Biden’s proposals would cost at least $8.09 trillion and as much as $10 trillion over 10 years, according to Fox News. And given the current state of the economy, his timing couldn’t be any more worse.

According to Biden’s website, “every cent” of his “$1.3 trillion investment in our nation’s infrastructure will be paid for by making sure the super-wealthy and corporations pay their fair share.”

In other words, Biden plans to raise fund his proposals by taxing the rich.

But America’s wealthy are not capable of — nor responsible for — financing a socialist economy. And if it’s the middle class Biden is working to rebuild, why would he condemn the successes of the rich who heavily support middle-class Americans with an abundance of employment opportunities?

In fact, it was largely because of tax cuts — some of which benefited the wealthy — that President Donald Trump was able to lower the unemployment rate to the best it’s been in nearly 50 years.

But Biden sees Trump’s economy as an issue; in a statement to Fox, the Democrat’s campaign attacked the Trump administration for its spending habits.

Specifically, Biden’s director of rapid response, Andrew Bates, claimed that the Trump administration is “on track to approve more than $4 trillion in additional spending this year alone — at this rate, that’s more than $40 trillion over 10 years. That’s on top of an unpaid for $2 trillion tax cut primarily for big corporations and the wealthiest Americans.”

But whether or not Trump is doing all he can to control spending, it seems hypocritical for Biden’s campaign to imply he could do better. After all, his proposals would contribute to a significant increase in the national debt — currently standing at about $26.5 trillion.

It’s similar to a child saying they don’t like the way someone runs, but when it’s their turn, they trip and fall at the start line.

For the millions of Americans out of a job due to the current health crisis, the last thing people are going to look forward to when they get back to work is being taxed an exorbitant amount to ease the overblown concerns of the left.

Biden said it himself (or at least his campaign did): “The pandemic has laid bare just how hard it is for people in this country to find access to quality caregiving they need for themselves, or to juggle the responsibilities of working and also caring for family members,” the campaign wrote in a Medium post on Tuesday.

So how does Biden plan to assist struggling Americans? His sickening campaign runs on the idea that if you give him your money (via donations), he can charge you more. No thanks.

Over a 10-year period, Biden’s plan would significantly increase the overall federal budget, according to Fox. And expensive coronavirus relief spending has already overwhelmed the national budget.

America’s economy, and the middle class Biden claims to hold near and dear, is likely to collapse if November’s election goes in his favor.