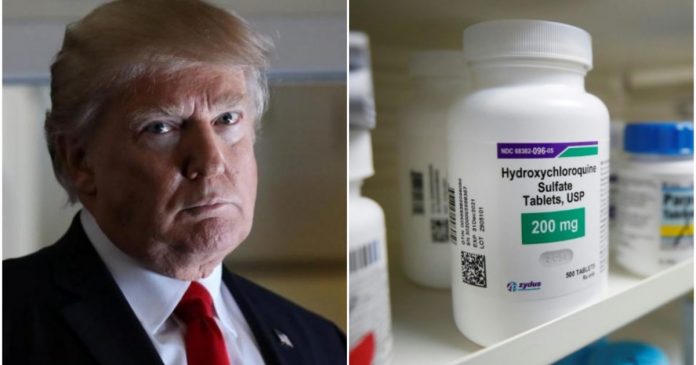 President Donald Trump and his son, Donald Trump Jr., are being censored for sharing information about hydrocloroquine, a popular and effective treatment for the COVID-19 Chinavirus.

The establishment is desperate to censor a video presented by Breitbart of courageous medical doctors holding a press conference giving the facts on how hydrocloroquine can be used to successfully treat COVID-19. Youtube and Facebook have also reportedly blocked the video. The fake news continues to promote the lie that the use of hydroxychloroquine to treat COVID-19 is unproven.

They are ignoring the many anecdotal cases of individuals who have been cured of coronavirus, including a Democrat state representative from Michigan who credits hydroxychloroquine with the miraculous recovery of she and her husband.

“Had you not brought this to the forefront … I wouldn’t be here today even having this conversation with you and being able to talk about the needs of Detroit,” said Rep. Karen Whitsett of Detroit while meeting with President Trump in the White House.

Big League Politics has also reported on how data that was used to demonize hydroxychloroquine was shown to be false and the study was retracted:

The authors of a medical study published in medical journal The Lancet have been forced to retract their study claiming that hydroxychloroquine treatment had fatal side effects after several reports pointed out the faulty data.

The data was apparently used from a small Illinois firm called Surgisphere, owned by Dr. Sapan Desai. Desai had a sci-fi writer and a lewd model on staff for his company as the study was produced, and shockingly, it somehow produced inaccurate results.

The study was ultimately retracted after Dr. Mandeep R. Mehra, a Harvard Medical School professor who initially signed on to the study, tried to double check and verify the authenticity of the findings. Desai would not allow for the data to be re-analyzed, which eventually led to the retraction of the report.

“We launched an independent third-party peer review of Surgisphere with the consent of Sapan Desai to evaluate the origination of the database elements, to confirm the completeness of the database, and to replicate the analyses presented in the paper,” their statement said, according to the New York Times.

“Our independent peer reviewers informed us that Surgisphere would not transfer the full dataset, client contracts, and the full ISO audit report to their servers for analysis as such transfer would violate client agreements and confidentiality requirements,” the authors added.

The disgraced World Health Organization (WHO) reportedly stopped research into hydroxychloroquine as treatment for COVID-19 because of the findings in this dubious report, adding to the laundry list of public health failures the globalist body has been responsible for throughout the coronavirus pandemic.

Big League Politics has reported about the study conducted by medical professionals at the Henry Ford Health System showing that hydroxychloroquine lowers the COVID-19 death rate as well:

A study conducted by the Detroit-based Henry Ford Health System has determined that hydroxychloroquine treatment lowers the death rate for COVID-19 patients.

Officials with Henry Ford Health announced on Thursday that their study has shown that hydroxychloroquine “significantly” decreases the death rate of COVID-19 sufferers. They came to their conclusion after analyzing 2,541 patients who were confined in their hospital system from March 10 and May 2. They found that 13 percent of patients treated with hydroxychloroquine died while 26 percent of patients who did not receive the miracle drug died.

“As doctors and scientists, we look to the data for insight,” said Steven Kalkanis, CEO of the Henry Ford Medical Group. “And the data here is clear that there was a benefit to using the drug as a treatment for sick, hospitalized patients.”

“We attribute our findings that differ from other studies to early treatment, and part of a combination of interventions that were done in supportive care of patients, including careful cardiac monitoring,” said Zervos, who works as division head of infectious disease for Henry Ford Health. Zervos conducted the study with epidemiologist Dr. Samia Arshad.

“Our dosing also differed from other studies not showing a benefit of the drug,” he added. “We also found that using steroids early in the infection associated with a reduction in mortality.”

Zervos believes that the findings of this study could be crucial in stopping a potential second wave of COVID-19 infections from causing many more deaths.

Ever since President Trump suggested hydroxychloroquine as a remedy for COVID-19, there has been an institutional conspiracy to stop the treatment from being used to save the lives of the sick – as science and medicine have become extremely politicized.

The globalist establishment wants more people to die so they can blame the crisis on Trump. They are pulling out all the stops to boot him from the White House in November.