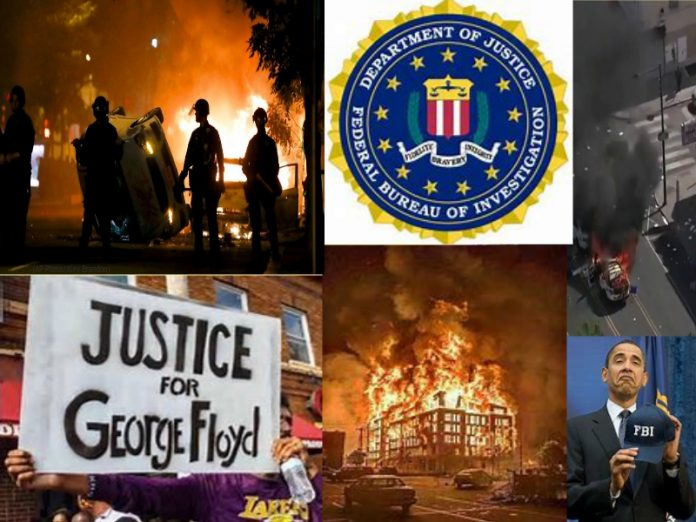 If you watched the video of the killing of George Floyd and were not horrified, I suggest you spend some time in intense self-reflection. I fear your immortal soul may be in peril. The man was murdered.

If you are engaged in peaceful protesting of Floyd’s killing, I support you fully. You are exercising your rights as an American citizen. You are demanding this nation do better and that there be a reckoning for a wrong done.

If you are watching the riots engulfing major American cities from coast to coast and spreading abroad and you honestly believe these are all spontaneous events fueled by nothing but frustration and anger, you are dangerously naïve.

What you are seeing now is a coordinated, premeditated effort by groups that have been building in strength for years. The goal of the rioting and looting now in progress is not justice. It is not equality. It is the destruction of the existing capitalist order and system of representative democracy and its replacement with a society patterned on the works of Marx and Engels.

Andy Ngo, a journalist perhaps best known for his work covering Antifa in Portland, Oregon had this to say in a recent piece, “We are witnessing glimmers of the full insurrection the far-left has been working toward for decades. The killing of George Floyd in Minneapolis was merely a pre-text for radicals to push their ambitious insurgency. In a matter of hours, after the video of Floyd began circulating the internet, militant Antifa cells across the country mobilized to Minnesota to aid ‘Black Lives Matter’ (BLM) rioters. ”

Ngo, who has been on the receiving end of Antifa brutality more than once, had this to say on the tactics in use by the groups setting the nation ablaze.
“Antifa, the extreme anarchist-communist movement, has rioting down to an art. The first broken window is the blood in the water for looters to move in. When the looting is done, those carrying flammable chemicals start fires to finish the job. Footage recorded in Minneapolis and other cities show militants dressed in black bloc- the Antifa uniform – wielding weapons like hammers or sticks to smash windows. You see their graffiti daubed on smashed up buildings: FTP means ‘Fuck the Police;’ ‘ACAB’ stands for ‘All Cops Are Bastards;’ ‘1312’ is the numerical code for ACAB.”

Ngo added these comments regarding the ideology at work. “At its core, BLM is a revolutionary Marxist ideology. Alicia Garza, Opal Tometi, and Patrisse Cullors – BLM’s founders – are self-identified Marxists who make no secret of their worship of communist terrorists and fugitives, like Assata Shakur. They want the abolishment of law enforcement and capitalism. They want regime change and the end of the rule of law. Antifa has partnered with Black Lives Matter, for now, to help accelerate the breakdown of society.”

Ngo is not some outlier. His comments have been echoed by the President, the Attorney General, and law enforcement officials coast to coast. On Sunday night, New York’s Deputy Commissioner for Intelligence and Counterterrorism John Miller detailed his office’s investigation into why the New York City protests have become so violent and damaging.

“No. 1, before the protests began,” Miller said, “organizers of certain anarchist groups set out to raise bail money and people who would be responsible to be raising bail money, they set out to recruit medics and medical teams with gear to deploy in anticipation of violent interactions with police.”

Miller added, “They prepared to commit property damage and directed people who were following them that this should be done selectively and only in wealthier areas or at high-end stores run by corporate entities.”
“And they developed a complex network of bicycle scouts to move ahead of demonstrators in different directions of where police were and where police were not for purposes of being able to direct groups from the larger group to places where they could commit acts of vandalism including the torching of police vehicles and Molotov cocktails where they thought officers would not be.”

“We believe that a significant amount of people who came here from out of the area who have come here as well as the advance preparation, having advance scouts, the use of encrypted information, having resupply routes for things such as gasoline and accelerants as well as rocks and bottles, the raising of bail, the placing of medics,” Miller said. “Taken together, (this) is a strong indicator that they plan to act with disorder, property damage, violence, and violent encounters with police before the first demonstration and or before the first arrest.“

The motives of the individuals involved in these ongoing attacks on the police and civil society need not simply be inferred, however. The web is replete with articles on anarchist and revolutionary sites glorifying and encouraging what is ongoing.

The following are excerpts from one of seemingly countless such pieces, this one glorifying the destruction of a police precinct headquarters in Minneapolis.

“When I arrived in the afternoon at 3rd precinct the vibe was jovial as thousands of people chilled around a burning car campfire in the bombed-out Target mini-mall. With the backdrop of a waterfall pouring out of the charred skeleton of a massive torched two-story housing development, people celebrated their success and how surreal the entire situation was. Packed vehicles with folks hanging out the windows weaved through the Target parking-lot yelling, “Fuck 12!” blaring Lil Boosie’s “Fuck the police” – a song that’s become default to Midwest riot culture.”

“As the sun went down the mood shifted towards rage as the 3rd precinct siege began in earnest. Eventually, the building was smashed and broken into. In a last-ditch effort to hold their territory, the pigs huddled in cowardice towards the back of the police station and lobbed tear gas into the wrath-swollen crowds of combatants. Fed-up and in the mood for a fight, the free people of the north pelted the ill-equipped enemy with projectiles behind makeshift plywood shield-walls as they slowly overwhelmed the pigs. With munitions likely running low and no options left aside from a strategic yet pathetic retreat, nothing remained to contest the takeover. The precinct was taken.”

“The spiritual and strategic victory in compromising and sacking the 3rd precinct is incalculable, and the symbolic power unleashed of what is possible in future revolts is nothing short of incredible.
Police stations CAN be overtaken.
The state CAN be bent to our will.
Long live anarchy and the free people of the north!”

No, there is no mystery as to what is happening. Revolutionary extremist groups are exploiting Floyd’s killing and stoking insurrection coast to coast. We should stop pretending otherwise. The President’s declaration that Antifa will be declared a terrorist organization is a good start in that direction.

There is, though, a very serious question not yet fully confronted in all this. How is it possible that groups with the sophistication and power that we now see have grown and organized in this nation over a period of what must be many years, and we were largely blind to and unprepared for their capabilities?

The FBI has the charter to handle domestic terrorism. In recent years it has managed to find the resources to wiretap the President’s National Security Advisor, to send agents on multiple trips abroad hunting for ammunition to use against the President, to surveil Carter Page and to launch an investigation of comments made by a junior Trump campaign official (Papadopoulos) to an Australian diplomat about Hillary Clinton’s emails. Yet, somehow it hasn’t had the time or manpower to address a growing domestic threat now setting our nation’s largest cities on fire?

Why? And, if the answer is, as I suspect, that the FBI was told to give these organizations a wide berth, who gave those orders?

Where was the FBI?