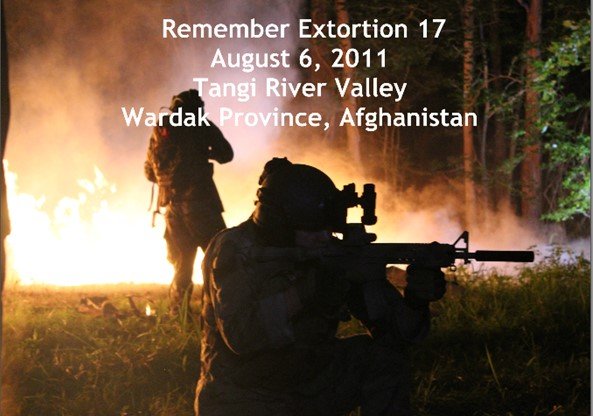 The Afghans who boarded the chopper only minutes before takeoff were missing from the flight manifest, with their names still hidden by the Pentagon to this day.

Just ninety-five days before, on April 1, 2011, SEAL Team Six had executed its finest mission by a covert raid into Abbottabad, Pakistan, killing the world’s most notorious terrorist, Osama bin Laden.  The government reported that Osama’s murderous body was later tossed overboard into the North Arabian Sea –instantly transformed into shark bait for the sea urchins, crabs, and other bottom- dwellers who could never sink quite as low as Osama had now sunk.

By stark contrast, August 6th became the SEALs’ darkest hour. When Extortion 17 crashed into an Afghan creek bed igniting an explosion brighter than the sun, not only did SEAL Team Six suffer its greatest loss in history, but the United States suffered its largest single loss of the Afghan war.

In retrospect, perhaps this mission should never have been flown, as the Pentagon has refused to give answers to simple questions posed by family members like Billy and Karen Vaughn, parents of fallen Navy SEAL Aaron Vaughn.

For example, what happened to the chopper’s black box?  Finding the black box, and the cockpit voice recorder, would answer lots of question about what went wrong during the disastrous flight.

The military that night sent twenty U.S. Army Pathfinders to the crash site to find the black box, but, unable to find it, the Pentagon later claimed that the black box had “washed away in a flood.”

Black boxes have been recovered in waters a thousand feet deep, but this one “washed away” in a muddy creek after a heavy rain? The Pathfinder’s platoon leader testified that Extortion 17 marked the first time that they had been unable to recover the flight recorder (black box).

The Pentagon maintained its “washed away in a flood” tale for two-and-a-half years, until February 27, 2014,  when in testimony before the Congressional Committee on Oversight and Reform, Pentagon spokesman Gary Reid changed the Pentagon’s story, testifying that the old chopper never had a black box to begin with.

Then why send in Pathfinders to find the black box, Mr. Reid?  Not a single member of the Congress asked that question.

Who were the Afghans on board Extortion 17?

Breaching military aviation protocol, eight unidentified Afghans, seven commandos and an interpreter, boarded Extortion 17 at the last minute. At a time when “green on blue” attacks in Afghanistan were rising (meaning Afghans “allies” shooting Americans) the Pentagon refuses to divulge the Afghan’s names. Why?

Granted, the Afghans’ presence on board may have been an innocent oversight.

But if so, why not release their names?

The Pentagon flew the Afghan bodies back to the United States alongside the SEALs and other Americans who perished on Extortion 17. We have since learned of increased friction between the SEALS and some of the Afghans who accompanied them on missions.

What happened on board Extortion 17?

Radio communications disappeared for several minutes during the flight. Inexplicable in-flight delays and strange communications from the pilots followed. Something had gone wrong.

Extortion was seven minutes late on a flight that should have taken ten minutes max. At end, it hung in the air, approximately 150 feet off the ground when it exploded.

In November of 2017, urged on by the late Congressman Walter Jones, Congressman Mac Thornberry, former Chair of the House Armed Services Committee, point-blank asked the Pentagon for the Afghans’ names. The Pentagon again refused to reveal their identity. And when asked about Afghans possibly buried at Arlington Cemetery, the Pentagon dodged that question as well.

Why is this relevant? Well, cremated Afghan remains buried in an American military cemetery could never be traced by DNA to see who they really were, nor examined for a match in the military’s Afghani’s Biometrics database to determine any history of jihadi activity prior to the flight.

The “Colt Report,” the official military investigation of the shootdown, claims the SEALs were an “Immediate Reaction Force” (IRF) that night. An IRF should only be deployed to rescue other Americans on the ground. But Army Rangers on the ground needed no help and have told us so in our interviews. Inconsistent reasons for the SEALs’ mission have raised more questions than answers.

Days after the shootdown, two British newspapers, the Telegraph and UK Daily Mail, citing sources inside the Afghan government, reported that Extortion 17 had flown straight into a predetermined Taliban trap, an allegation largely ignored by the Colt report and the congressional committee.

Also, an American AC 130 gunship circling overhead that night pleaded with flight control to stop Extortion’s mission, to turn the chopper around and send it back to base, because Extortion was flying into grave danger. The American command on the ground ignored this plea from the gunship and ignored repeated requests by the gunship to fire on Taliban operatives on the ground headed toward Extortion 17’s landing zone.

The congressional committee did not tackle these questions.

We hope that an upcoming docudrama movie produced by Triple Horse Studios (www.triplehorse.com) will examine some of these questions, and maybe even answer a few.

Meantime, in the nine years since we lost the men of Extortion 17, for many, the memory of their heroism may have faded under a thousand distracting news cycles that have clouded our focus since their death.

But despite the passage of time, and the many unanswered questions, we owe it to ourselves to pause on August 6th to reflect and remember these thirty great Americans who gave their lives for this country.

They were the best we have to offer, and we owe them a debt of eternal gratitude.

Don Brown, a former US Navy JAG Officer, is author of the book “Call Sign Extortion 17:The Shoot-Down of SEAL Team Six, and is the author of thirteen other books on the U.S. military, including Travesty of Justice” The Shocking Prosecution of Lt. Clint Lorance,” and the 2017 national bestseller, “The Last Fighter Pilot: The True Story of the Final Combat Mission of World War II.”