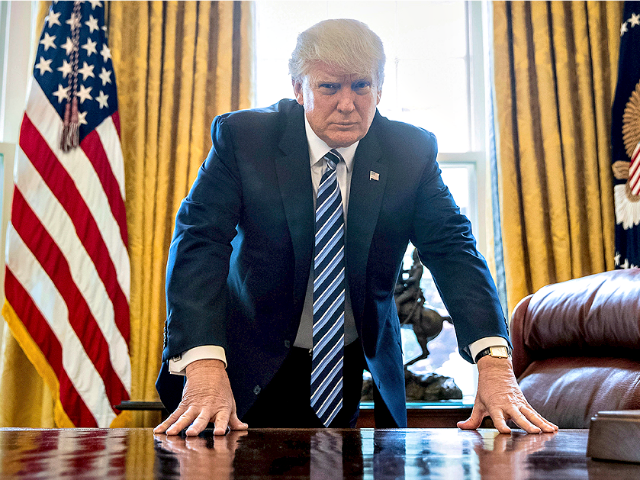 The document, which is up to date as of early August and provided by the president to Breitbart News during his Oval Office interview on Monday, goes through what the president said was “page after page” of accomplishments.

“This is for you,” President Trump told Breitbart News as he handed the six-page document across the Resolute Desk. “I just had this done. These are the accomplishments. It’s page after page of stuff look—nobody’s done.”

The document contains just one subjective shot at his opponents in the establishment media, echoing the president’s claim that he has boosted television ratings and subscription sales and website traffic for the media. “Saved the NY Times, saved the Washington Post, and saved Cable TV,” reads the first item at the top of the first page.

In that vein, during his interview with Breitbart News, the president took some shots at establishment media outlets like CNN and MSNBC, which he called MSDNC.

“I think CNN is election interference because, you know, they are just an organ pipeline for the DNC. Look at what they do. Same with MSDNC,” Trump said. “Look, MSDNC is an absolute vehicle to get the word out. They should actually pay campaign contributions on what they’re doing. This is about a campaign contribution. I’ve never seen anything like it. MSDNC, CNN, the networks, everything—and yet, here we are. Look. Do you notice, it’s oval? It’s not round. But when you think about it, it’s hard to believe because the press is corrupt a hundred percent. If you look at it, the press is corrupt. Much of it, not all of it, but I would say most of it.”

Trump said that even Fox News has slipped from its former glory.

“Even Fox is not the same. Let’s not kid ourselves,” Trump said. “Fox is a big difference from what it was.”

Then, he made a comment in line with the document, noting that he believes the establishment media will struggle when the day comes he is no longer president, because whoever replaces him—whether it be Democrat Joe Biden next year, or somebody four years from now—will be boring.

“Someday when I’m not here, they’re all gone,” Trump said. “Because nobody is going to write. They’re not going to write about sleepy Joe Biden.”

While the document does have that one gratuitous shot at the media on the top of the first page, the content on the rest of the six pages of material lists several real demonstrable and actual accomplishments of the Trump administration—including during the coronavirus pandemic. This six-page document that the president handed to Breitbart News serves as perhaps the most substantive compilation the president and his team have put together detailing what they have done to help the American people through the worst of the pandemic, as well as several other successes the president has had throughout his administration.

The first major bullet point on the first page is titled: “The Great American Comeback is already underway.” It cites how the Trump administration added 1.8 million jobs in July, “exceeding expectations for the third straight month.” It also notes that Trump oversaw the addition of nine million jobs since May, “surpassing market expectations by a total of 12 million new jobs.”

It notes that half of the new jobs created are full-time, and that wages have increased by 4.8 percent year-over-year. The document cites the rapidly dropping unemployment percentage during the pandemic, now back down as of July to 10.2 percent, and noted that African American and Hispanic job creation has boomed during the past three months, rising by one million and 2.3 million respectively in those communities. Overall, job gains since April, the document from the president says, have recovered 42 percent of jobs lost to the pandemic already with 80 percent of small businesses reopened and retail sales spiking in May and June with a record-setting 18.2 percent increase in May and 7.5 percent increase in June.

The document cites several other economic successes of the Trump administration during the pandemic and then shifts into the next section, which details efforts the president made during the pandemic to provide economic relief to get the country through the worst of times. Walking through the over $3 trillion in relief that the president provided to American workers and businesses, the document says the Trump administration saved “many tens of millions of jobs” through signing the $2 trillion CARES Act, which sent direct cash payments to 80 million American workers, and approved $670 billion for the Paycheck Protection Program (PPP), which has processed more than five million loans to small businesses and, according to the document, “saved 50 million American jobs.” The document also cites Trump’s recent executive actions to provide a payroll tax holiday through the end of the year, an extra $400 per week in unemployment benefits to those who need it, to help stop evictions, and to defer student loan payments.

Then it shifts into public health actions the president has taken to “vanquish COVID-19,” which the document says is “the greatest national mobilization since WWII.” It cites the Trump administration’s travel restrictions on China, Europe, and Iran, as well as the administration developing the “most advanced testing system on earth” that has already conducted 65 million coronavirus tests—and notes that despite the United States being just five percent of the world’s population, this country, thanks to the Trump administration, has conducted 25 percent of the world’s coronavirus tests so far. The document cites “Operation Warp Speed,” which has moved three vaccine candidates into Phase Three trials already–a “record time” for vaccine production–and the recently announced $1 billion deal with Johnson & Johnson to “manufacture and distribute 100 million doses” of vaccine when approved.

The document notes that the Trump administration has “reduced mortality by 85% since April through the use of therapies such as Remdesivir, dexamethasone, and antibody treatments.” It notes that the Trump administration has “secured over 4.1 million doses of Remdesivir, enough to treat over 650,000 patients,” and has “treated 86,000 Americans with convalescent plasma” which can “reduce mortality by 50%.” It notes too that more than 230 more clinical trials are underway for more potential emerging treatments.

As for personal protective equipment, the document the president gave to Breitbart News noted that the administration has coordinated with private sector partners to deliver more than 196 million N95 respirator masks, 815 million surgical masks, 20 billion gloves, 34 million face shields, and 354 million gowns. The document says the administration has “replenished the long-neglected National Stockpile by tripling the number of N95 masks on hand to over 45 million,” tripled the number of gowns available to 15 million, and quadrupled the number of ventilators to 75,000. It also says the administration, using the Defense Production Act, “awarded contracts for 200,000 ventilators” to be produced, and that no American who has needed a ventilator to fight the coronavirus has been denied one anywhere in the country.

The document also cites various actions the president has taken on prescription drug prices, as well as on law and order. Specifically on that front, it notes that since the president launched Operation LeGend to send federal officers to a number of U.S. cities including Chicago, Albuquerque, Cleveland, Detroit, Milwaukee, Memphis, Kansas City, and St. Louis, the government has already made 156 arrests, and cites the president’s successes in Portland, Oregon.

The president also provided Breitbart News with, in addition the six-page document, a notecard on official White House card stock detailing the president’s successes when it comes to appointing and then confirming with the GOP-controlled U.S. Senate federal and appellate court judges and Justices to the U.S. Supreme Court.

“We’re at 232 judges. We’ll be at 300 judges by the end of the year,” Trump told Breitbart News during the Oval Office interview. “That’s amazing isn’t it?”