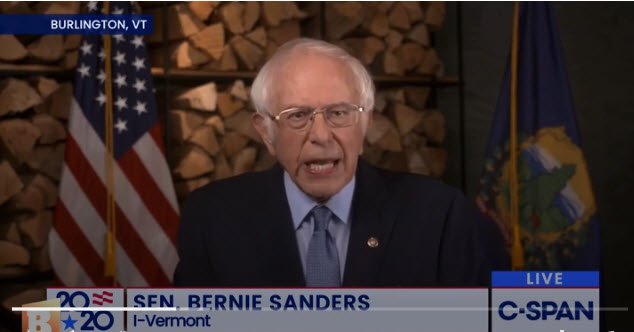 CLAIM: Sen. Bernie Sanders (I-VT) stated President Trump is leading the United States down the path of authoritarianism and asserted it has already “taken root in our country.”

Verdict: False. President Trump has not chipped away the personal freedoms of Americans. Moreover, he has demonstratively emphasized the importance of federalism — allowing states and localities to make decisions for themselves — particularly during the Chinese coronavirus pandemic.

“And, in the midst of all of this, we have a president who is not only incapable of addressing these crises but is leading us down the path of authoritarianism,” Sanders assessed, later warning voters that the upcoming election is “about preserving our democracy.”

“During this president’s term, the unthinkable has become normal,” he said.

He accused the president of attempting to “prevent people from voting” and stated that Trump “undermined the U.S. Postal Service, deployed the military and federal agents against peaceful protesters, threatened to delay the election, and suggested that he will not leave office if he loses.”

“Under this administration, authoritarianism has taken root in our country,” he continued:

I, and my family, and many of yours, know the insidious way authoritarianism destroys democracy, decency, and humanity. As long as I am here, I will work with progressives, with moderates, and, yes, with conservatives to preserve this nation from a threat that so many of our heroes fought and died to defeat.

Despite Sanders’ claim, President Trump has not embraced authoritarianism and has actually embraced federalism, particularly as the Chinese coronavirus has played out over the past few months.

While many progressives have called for national lockdowns and national mask mandates, the president has left the decisions to localities, allowing governors to make the final calls on how to handle the health and economic crises in their respective states while providing uniform guidance at the federal level.

“No, I want people to have a certain freedom, and I don’t believe in that,” Trump said of a nationwide mask mandate. “No, and I don’t agree with the statement that if everybody wear a mask, everything disappears.”

Trump has received backlash for erring on the side of liberty throughout the pandemic, as many progressives blame him for coronavirus fatalities due to his freedom-based approach.

“Sleepy Joe rejects the scientific approach in favor of locking all Americans in their basements for months on end,” Trump said, drawing a contrast between himself and his opponent, who recently called for a three-month national mask mandate.

“Look at these videos for one second,” the Florida lawmaker told Barr. The video showed various scenes of violence in socialist Venezuela.

“We have seen violence in Venezuela at the hands of Maduro firing tear gas at protesters and using brutal tactics to crush demonstrations. That’s what we see from dictators on both the left and the right,” she told the attorney general.

“But it’s hard to distinguish these photos from those events and from the videos that we’ve seen by U.S. Federal Police in Portland,” she continued, asking how she can restore confidence among her constituents who are seeing “these images of violence used against the peaceful protesters” on the news every night.

Barr calmly explained that officers only used force against violent rioters “or in situations where protesters are not following police directions.” There remain countless examples of violent rioters targeting police officers with explosives, rocks, and lasers which can cause permanent blindness, as well as well-documented instances of mass looting, with some looters livestreaming their brazen criminal activity in towns like Chicago.

During the hearing, Barr explained what prompted the Trump administration to take action. Of Portland, Barr said:

Every night for the past two months a mob of hundreds of rioters have laid siege to the federal courthouse and other nearby federal property. The rioters have come equipped for fighting. Armed with powerful slingshots, tasers, sledge hammers, saws, knives, rifles, and explosives devices.

“What unfolds nightly around the courthouse cannot reasonably be called ‘protest,’” he continued, referring to the violent demonstrations as an “assault on the government of the United States.”

Ironically, Sanders embraces a big government ideology typically favored by authoritarians, and it is the Vermont senator who has issued controversial remarks on dictators in the past.

He came under fire earlier this year after praising communist dictator Fidel Castro’s literacy program. Beyond that, the socialist senator has “repeatedly praised communism in Cuba, China, and Nicaragua, with weak caveats acknowledging that they are authoritarian regimes,” as Breitbart News detailed.