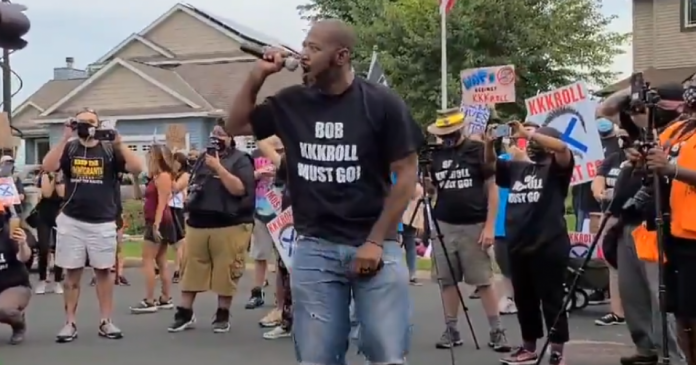 A Democratic state legislative candidate called upon a Black Lives Matter mob “protesting” in a residential neighborhood of Hugo, Minnesota to “burn down” the Minneapolis/St. Paul suburban community.

Thompson appeared to be directing his rant towards several teenage girls.

John Thompson claimed that a supposed “grand wizard” of the Ku Klux Klan was living in the city of Hugo, but it’s likely his claim is false, and that he’s merely referring to Bob Kroll, the leader of the Police Officers Federation of Minneapolis. The Black Lives Matter mob had been protesting outside of Kroll’s house, directing hateful language towards at least one family standing on the yard in the street intimidation event.

Thompson is currently a Democratic candidate for the Minneapolis State House, and recently won the primary for House District 67.

Kroll, a longtime police union in Minneapolis, has become a target of hate from Black Lives Matter mobs in the area. The legality of the confrontational street “protest” directly outside of his house is unclear, but urging a crowd to “burn down” an entire city is almost assuredly “fighting words” that can be legally prosecuted as an incitement to violence and riot under state and federal laws.