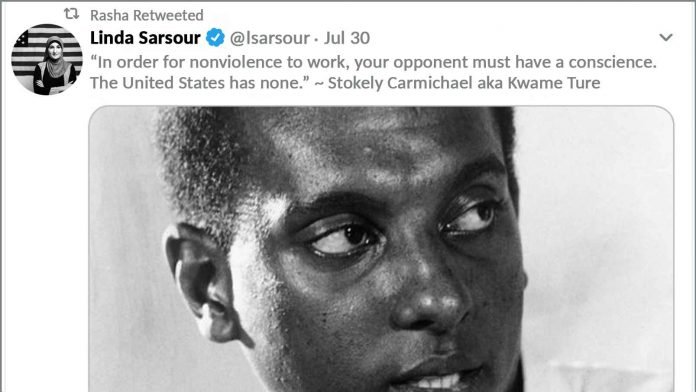 Ture: “For nonviolence to work, must have a conscience. US has none.”

Joe Kaufman, a Shillman Journalism Fellow at the David Horowitz Freedom Center, is Chairman of the Joe Kaufman Security Initiative and the 2014, 2016 and 2018 Republican Nominee for U.S. House of Representatives (Florida-CD23).

From supporting BDS to posting photos of Hamas celebrations on social media to the pendant of “Palestine” shaped like Israel that she flaunts around her neck, Florida Democratic operative Rasha Mubarak is all about hatred of the Jewish state. However, more and more, Mubarak’s target includes America. That certainly was the case last month, when she retweeted an infamous call for violence in the US made previously by 60s radical, Kwame Ture, a.k.a. Stokely Carmichael. It speaks to the danger of Mubarak and of a political party whose refusal to condemn Mubarak’s incitement and bigotry amounts to complicity.

For nearly a decade, Mubarak has been pushing the notion that Israel has no right to self-defense. She did it in 2019, when Hamas launched more than 600 rockets into Israel leading to the deaths of four civilians, and Mubarak tweeted against anyone who would dare defend Israeli retaliation, including Nikki Haley, Bill de Blasio, and The Ellen Show producer Andy Lassner. She did it in 2013, when she flippantly posted on Facebook that US diplomats mouth the words “right to defend itself,” regarding Israel, “when they snore.” And she left no room for debate, in 2012, when she tweeted, “#LiesImTiredOfHearing Israel has the right to defend herself.”

Mubarak shows support for Palestinian terrorists. This past June and July, Mubarak posted memorials onto her social media for car-ramming terrorist Ahmed Erekat, who was shot and killed after attempting to run over an Israeli border officer stationed at a checkpoint. At the end of the 2014 Israel-Gaza Conflict, along with photos of a jubilant Hamas, Mubarak tweeted, “Thousands of people celebrating in the streets of Gaza for the victory. Alhamdulillah. #VictoryForGaza.” Mubarak has promoted material from Hamas-related media, and she has personally been affiliated with the Hamas-linked groups CAIR and Islamic Relief.

Mubarak has organized anti-Israel events that have devolved into the worst of anti-Semitism, where Jews have been labeled “terrorists,” “baby killers” and “Jesus killers.” In September 2013, Mubarak ridiculed Jews, herself, when she posted a report onto her Facebook page declaring that Orthodox Jews had asked the Israeli government for “beard-friendly gas masks,” a matter that our own US military has dealt with. About the report, which featured the side profile of an observant Jew with a long beard and side curls, Mubarak mockingly wrote, “Seriously? No seriously! Ufff… Lol…”

On July 30th, Mubarak retweeted the following quote attributed to 60s radical black activist Kwame Ture, along with a profile photo of him: “In order for nonviolence to work, your opponent must have a conscience. The United States has none.” The quote was a criticism of civil rights leader Martin Luther King, Jr., who Ture believed was wrong to reject violence in favor of peaceful protest. Ture, a former Prime Minister of the Black Panther Party, favored violent resistance.

The individual who originally sent the tweet that Mubarak had retweeted was fellow anti-Semite Linda Sarsour. In October 2012, Sarsour said, “Nothing is creepier than Zionism.” In December 2017, she justified terrorist attacks on Israeli civilians, stating, “In context of what’s happening in Palestine… Nobody gets to tell an occupied people how to respond to their own oppression and the continued stripping of their humanity, agency and land… Oppressed people determine how, when and where to resist.” Sarsour has defended Louis Farrakhan, and she has repeated the anti-Semitic tropes of Jewish dual loyalty and what she refers to as “Jewish media.” For this, in September 2019, Sarsour was forced to step down from the leadership of the Women’s March.

Rasha Mubarak is a National Committeewoman for the Florida Young Democrats (FYD). She is praised on the group’s Facebook page, as recent as this past June, and her likeness is currently found on the FYD official website homepage. Given these things, it is clear that FYD as well as the Florida and National Democratic Party stand behind Mubarak and her extremist and bigoted views and actions. If there were any concern whatsoever, the Party has not shown it.

Mubarak is but one of many who appear to represent the Democratic Party’s newfound embrace of violence and bigotry. It is time for the Democratic Party to wake up and cut ties with Mubarak and her ilk. Her glorification of violence against Israelis and Americans, as in the case of the Kwame Ture post, needs to be called out by the party. Every day that goes by without any condemnation or censure is more proof that the Democrats have sided with those who hate and want to destroy Jews and America.