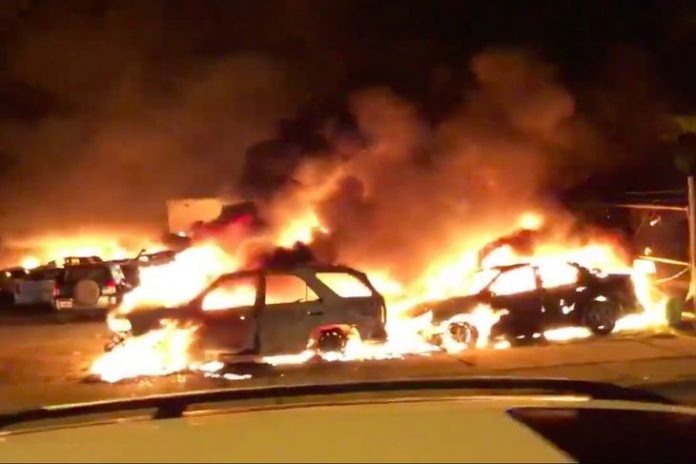 In the name of Black Lives Matter, rioters shut down the streets in Kenosha, Wisc., setting trucks on fire, patrolling the streets with semi-automatic rifles, and ransacking nearby businesses. The riot followed the release of a viral video showing Kenosha police repeatedly shooting a black man who resisted arrest and reached into his truck. The man, identified as 29-year-old Jacob Blake, appears to have a violent history. Blake is in critical condition at a nearby hospital, according to police.

Rioters mobbed the police station and reportedly lobbed an incendiary device at the cops before police scattered them. Then the rioters took to the streets.

The shooting of Jacob Blake

According to the Kenosha Police Department, officers responded to a domestic incident at about 5 p.m., and the incident resulted in a shooting. “Officers provided immediate aid to the person. The person was transported via Flight for Life to Froedtert Hospital, Milwaukee. The person is in serious condition.”

A viral video shows officers attempting to arrest Blake, who proceeds to enter the driver’s side of a vehicle. As he reaches into the vehicle, the cops open fire.

Although the video is disturbing, it does not capture the full story, though it does seem to show Blake resisting arrest.

Blake also has a violent history. In 2015, Blake (then 24) reportedly pulled a handgun on another man at a bar, the Racine County Eye reported. After leaving the bar, Blake aimed the gun through the window at patrons inside the bar. After Blake escaped in an SUV, police pulled him over. When cops told him to put his hands outside the window of the vehicle, he exited the SUV instead and approached officers. He repeatedly resisted arrest. His blood-alcohol level tested at 0.144.

Blake’s criminal history does not justify police use of force against him, but Americans should hesitate to leap to conclusions about a shooting like this based on one viral video.

Yet Gov. Tony Evers (D-Wisc.) did not wait for more details before condemning the shooting.

“Tonight, Jacob Blake was shot in the back multiple times, in broad daylight, in Kenosha, Wisconsin. Kathy and I join his family, friends, and neighbors in hoping earnestly that he will not succumb to his injuries,” Evers tweeted. “While we do not have all of the details yet, what we know for certain is that he is not the first Black man or person to have been shot or injured or mercilessly killed at the hands of individuals in law enforcement in our state or our country.”

“We stand with all those who have and continue to demand justice, equity, and accountability for Black lives in our country—lives like those of George Floyd, of Breonna Taylor, Tony Robinson, Dontre Hamilton, Ernest Lacy, and Sylville Smith,” the governor added. “And we stand against excessive use of force and immediate escalation when engaging with Black Wisconsinites.”

He also leapt to the conclusion that racism motivated the shooting. “In the coming days, we will demand just that of elected officials in our state who have failed to recognize the racism in our state and our country for far too long.”

Kenosha erupts into riots and looting

On Sunday evening, a large crowd of protesters gathered at the Kenosha police station. TMJ4 News reporter Lauren Linder reported that a rioter threw an incendiary device that set multiple fires at the scene.

Rioters broke into Kenosha stores and looted them, one by one.

The BLM rioters used chunks of concrete to break into businesses and loot them.

They even broke into and vandalized a public library.

A rioter with a semi-automatic rifle confronted an armored police vehicle on the street, as he and other rioters started taunting police to gas them. Police did indeed respond with gas.