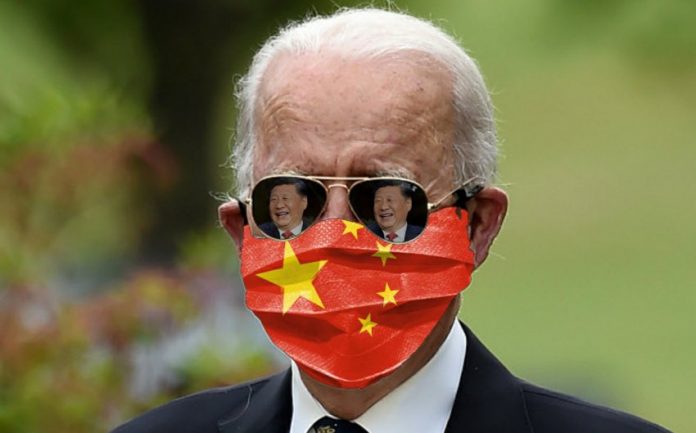 Americans largely avoided watching the recent Democratic Party “convention.” Wisely so, it was a dismal affair.

The Chinese Communist Party (CCP) was much more enthusiastic. The China Global Television Network, a mouthpiece for the CCP stated, “If the Democratic Party is a big tent, the convention was a giant marquee.” The network’s article went on to heap praise specifically on Joe Biden saying he “exceeded expectations” and “delivered a powerful speech almost flawlessly. “

There is a reason.

Joe Biden was elected to the U.S. Senate in 1973. Since the day he took office, 47 years ago, he has adhered to a policy of capitulation towards the Chinese that has proved to be one of the great disasters in world history.

When Biden took his seat for the first time on the floor of the Senate, China was a backward, economically impoverished nation still largely ostracized by the civilized nations of the world.

It now has the world’s second largest economy and is challenging the United States and its allies across the globe.

It’s goal? To become the dominant military, political and economic power on the planet. It is well on its way, and Joe Biden has been a driving force behind its rise.

In 2000 then-Senator Biden was one of the key individuals behind our giving the Chinese “permanent normal trading status.” That move paved the way for China to gain admission to the World Trade Organization and turned loose the CCP managed and directed economy to begin to gut American industry.

It has done so with ruthless efficiency.

Since 2001 the United States has lost 3.7 million jobs to China. Three quarters of those jobs were in the manufacturing industry. In the first decade of the Chinese economic assault on the American economy alone the trade deficit with China meant a reduction in the income of U.S. workers of $37 billion a year. One-third of the workers who lost their jobs in this carnage were unable to find other employment. Fully 21% of them simply left the work force entirely.

Seventy-three thousand factories in the United States closed as the result of the disastrous economic policy toward China championed by Joe Biden. By the time Donald Trump took office in 2016 the American manufacturing sector had taken such a beating that total employment in that portion of the economy was the same as it had been 70 years earlier.

And, as American jobs disappeared, our citizens desperately tried to survive on unemployment benefits and part time, low wage jobs and China grew every more powerful,

Biden had this to say.

“China is going to eat our lunch? Come on, man. I mean, you know, they’re not bad folks, folks… But guess what? They’re not competition for us.”

That wasn’t decades ago. That was Biden speaking last year.

The CCP’s China is not just America’s primary economic competitor, however, or a threat to the standard of living of our citizens. It remains a brutal, totalitarian regime, which holds to power through the unmatched brutality of its security apparatus and the savagery of its system of slave labor camps.

It herds ethnic and religious minorities into camps where they are systematically stripped of their culture and identity and forced to manufacture products for export to Western nations including the United States.

It operates a vast organ harvesting industry, which cuts organs from living, unwilling donors and implants them in foreign patients in exchange for hard currency.

The myth that engagement with China would soften its regime and lead to democratization has long since been exposed. The Chinese people have not been helped by China’s rise. They have only become that much more firmly trapped under the iron rule of the thuggish CCP.

And, as the Orwellian nightmare of modern China has deepened, and its citizens lives become ever more desperate, Joe Biden has remained silent – seemingly more concerned about not angering the Communist rulers in Beijing than the lives and well-being of American citizens or the average Chinese living in a 21st century Stalinist hell.

Biden’s weakness has extended beyond economic affairs and human rights into the realm of national security as well. China has put its new found wealth to good use embarking on an ambitious expansion of its military and a modernization of its defense capabilities.

Over the last decade, in particular, it has put its armed forces to work, building bases on artificial islands in the South China Sea and challenging Japan in the East China Sea.

Vice-President Biden pushed then President Obama to back away from challenging the Chinese annexation of the South China Sea – one of the world’s most strategic waterways. When Obama wanted to continue U.S. Navy patrols of the area, designed to challenge Chinese claims to what were clearly international waters, it was Biden who convinced the President to back off and acquiesce in China’s illegal actions.

“He’s particularly unaware of military threats. One of the worst things I’ve seen him do … is when he was vice president, Obama wanted to have Navy patrols in the South China Sea. Biden stopped them for four years – would not challenge Chinese claims in the South China Sea,” stated Michael Pillsbury, Director of the Center on Chinese Strategy at the Hudson Institute.

The reality is that Joe Biden, like far too many of the members of America’s self-appointed elite, chose a side in the confrontation between the United States and China many decades ago.

Biden hasn’t acquiesced in what Beijing has done for the last forty years. He has helped it do it. He has not been a victim of the CCP. He has been a partner in its rise, betting like his son Hunter, who was given $1.5 billion dollars by the CCP and helped it spy on America’s nuclear industry, that China was the future.

They know he is Beijing Biden.