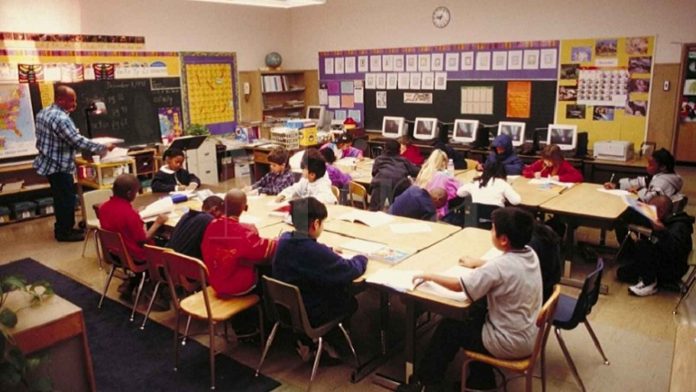 The production of brainwashed generations of automatons.

The explosion of lawless rioting on American streets was only a matter of time. Sixty-two years ago, former FBI agent W. Cleon Skousen wrote “The Naked Communist” to warn Americans about how communists planned to destroy our system from within, not by means of sudden revolution as envisioned by Karl Marx, but through a version of Italian communist Antonio Gramsci’s “cultural Marxism.” With a nod to the Chinese Communist Party (CCP) and its People’s Liberation Army (PLA), it has been a “long march through the institutions” that has brought us to the brink of catastrophe—and much of it began in our schools.

Chapter 13 of Skousen’s book lists 45 goals of communism in America. Number 17 reads: “Get control of the schools. Use them as transmission belts for socialism and current Communist propaganda. Soften the curriculum. Get control of the teachers’ associations. Put the party line in textbooks.” And so they did. While American parents were busy working to sustain their families and achieve a piece of the American dream, their children were at schools with teachers and textbooks that taught them to hate America, the Judeo-Christian foundations of our national identity, and the remarkable individuals who built this country on the principles of the Declaration of Independence, our Constitution, the Federalist Papers, and more.

As a result, the brainwashed generations of automatons marching in lockstep out of such schools possess neither critical thinking nor the intellectual ability to appreciate the brilliance and opportunity bequeathed to them by the great philosophers of Western Civilization. But, as Gramsci envisioned, they enter the ranks of art, film, music, literature, faith communities, government, media, and of course, academia, in droves. There will be no need for gulags or firing squads—or at least, not much. As KGB defector Yuriy Bezmenov told us, subversion is a far more destructive weapon than violence. Today, we face a situation perhaps only slightly exaggerated in this recent quote from Jeff Nyquist: “The Constitution of the United States is something alien to most of the persons who occupy the actual government formed under it”. [Emphasis in the original.]

So, how did this happen?

The plot to destroy Western Civilization was hatched in Moscow shortly after the 1917 Bolshevik revolution and implemented through the Institute of Social Research at Frankfurt University (later simply, The Frankfurt School). John Dewey, Herbert Marcuse, and others brought socialist concepts of “progressivism” to U.S. schools through the National Education Association. Out went E Pluribus Unum; the firm, fixed principles of math and science; the accurate teaching of historical fact; and all religion. In their place came the indoctrination of critical race theory, identity grievance, and the angry psychobabble of “victimhood.”

Textbooks like Howard Zinn’s “A People’s History of the United States” (1980) and “A Young People’s History of the United States” (2007) that are used across the U.S. from middle school through university, distort the true historical record and paint America as irredeemably oppressive, racist, and unjust. As I wrote in “Santa Barbara School District: Where Marxism & Black Lives Matter — But Academics, Not So Much,” at Front Page Magazine on 19 June 2020, Zinn’s ‘solution’ was class warfare that pits identity and minority groups against one another, rejects American exceptionalism, abandons free market capitalism, and goads impressionable students to anger, despair, and hopelessness about their own country. Psychologically twisted revolutionaries steeped in Marxist hatred like Bill Ayers and the Weather Underground set off bombs, smashed windows, and assaulted police in the 1960s-1970s. But instead of going to prison, Ayers went into academia and later held the joint titles of Distinguished Professor of Education and Senior University Scholar at the University of Illinois at Chicago, where he imparted his hatred for his homeland to further generations of students. Proclaiming Justice to the Nations founder Laurie Cardoza-Moore appeared on Fox and Friends Weekend on 11 July 2020 and rightly noted that “The greatest national security threat to the United States is coming from U.S. history textbooks and the Common Core curriculum.”

Decades of such indoctrination have wreaked the havoc we see today on our streets: crazed mobs attack police, assault private citizens and business owners, vandalize property federal and private alike, tear down statues without even knowing whom they represent, set up “autonomous zones”, deface synagogues, and scream antisemitic slurs. The avatars of the current insurrection are Antifa and the Black Lives Matter (BLM) movement. Indeed, BLM even has a national organization called Black Lives Matter at School (BLMS), whose signature objective is the mandatory injection of Black History and Ethnic Studies into U.S. school curricula. A project of the Movement4BlackLives (whose horrifically antisemitic, racist 2016 Program is now archived online), BLMS offers an online Curriculum Resource Guide based on the BLM’s guiding principles and other materials that promote the three African-American Marxist women who founded BLM, “queer and transgender affirming,” “globalism,”  and “disrupting the Western-prescribed nuclear family structure.” BLMS has the endorsement of the National Education Association, the largest teachers union in the U.S.

In California, a proposed Ethnic Studies Model Curriculum (ESMC), which is among other things both antisemitic and anti-Israel, has been under consideration and revision for more than a year. But even as the revision process grinds on, a group calling itself Save CA Ethnic Studies reportedly is attempting an end-run around the system to hoodwink individual district school boards in CA to vote on a previously criticized and rejected version of the curriculum (sometimes without even being shown the original draft). More than a dozen CA school boards so far have adopted resolutions in support of that earlier proposed ethnic studies curriculum. In response, a letter signed by some 88 state and national organizations has been sent to the California Department of Education to protest the Save CA Ethnic Studies attempted deception as well as its efforts to “indoctrinate students into a highly controversial and divisive set of ideological beliefs that we feared would exacerbate ethnic divisions and foment bigotry in California schools.” Signatories include the American Truth Project, Americans for Peace and Tolerance, B’nai B’rith International, the Endowment for Middle East Truth (EMET), Facts and Logic About the Middle East (FLAME), the Legal Insurrection Foundation, Proclaiming Justice to the Nations, the Simon Wiesenthal Center, The Lawfare Project, the Zionist Organization of America, among many more.

Across the country, however, including in private secondary schools like Phillips Academy Andover, Phillips Exeter Academy, and Sidwell Friends, school systems are pronouncing support for the Marxist BLM agenda as they come under pressure to include materials on “institutionalized racism” in their curricula. In public school systems in New York City, Wake County, NC, the Santa Barbara Unified School District, and others, hard leftist school boards are kowtowing to the belligerent demands of Black Student Youth groups and others. At the Santa Barbara Unified School District Board Meeting of 9 June 2020, for example, resolutions were accepted declaring that “all Students Deserve Justice, Equity, and Freedom” and declaring February 2-5, 2021 as Black Lives Matter In School Week (one of the demands of the BLMS group). Then, two weeks later, in a Resolution dated 23 June 2020, the Santa Barbara School District passed a resolution declaring, among other things, that “racism is a public health emergency,” and resolving that “the Santa Barbara Unified School District will develop and purchase culturally relevant resources for educators and families for distribution and posting on the district website that 1) teach about, celebrate, uphold, and affirm the lives of Black people…” (It is not specified from whom or in accordance with which regular bidding process such purchase of “relevant resources” would be affected.)

This is but an overview of the Marxist agenda that has been for decades and is continuing to this day to be jammed down the throats of America’s students. Hitherto unsuspecting parents are waking up, though, especially during this time of online instruction during the coronavirus crisis. They are seeing, sometimes for the first time, what their children are being taught—and many are furious. The more questions the parents are asking, the more the school boards are resorting to deception and obfuscation, deliberately to exclude the very families with whose children they have been entrusted. It’s not their children and it’s not their money. Parents increasingly are attending school board meetings and demanding answers. They are doing what any patriotic and responsible American parents would do to ensure their children are not being indoctrinated and recruited by shadowy Marxist interests to hate them and the country they love.

With our nation under siege, as Gateway Pundit’s Jim Hoft wrote in a 7 July 2020 piece, “We cannot claim to truly appreciate the Founders and the nation they secured for us while simultaneously refusing to do what it takes to keep and maintain this nation.”

“We are the keepers of the flame of liberty” (President Ronald Reagan, 1986)

Clare M. Lopez is the Founder/President of Lopez Liberty LLC.