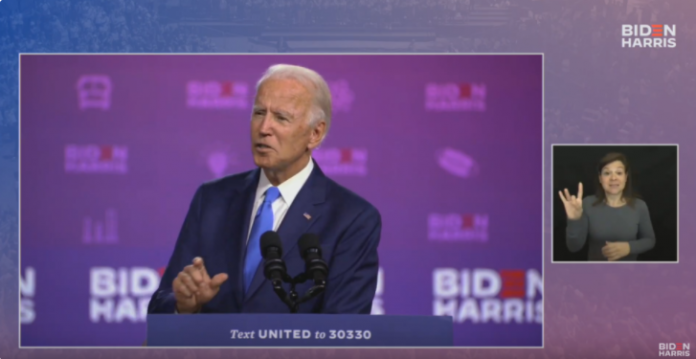 Biden appeared to blame Trump supporters in Portland for “someone shot by someone in the crowd, with a bullet, killed.”

Joe Biden finally took questions today after delivering some remarks, before travelling to Kenosha, Wisc. tomorrow. Biden appeared to blame Trump supporters in Portland for “someone shot by someone in the crowd, with a bullet, killed.”

He was asked if he agreed with running mate Kamala Harris’ statements that the officer who shot Jacob Blake in that city should be charged.

It appears that he said that yes, those officers should be charged, as well as the officers involved in the death of Breonna Taylor.

“I think we should let the judicial system work its way. I do think there’s a minimum need to be charged, the officers, and as well as Breonna Taylor.

“And I might add, by the way, I think what happened in Portland, where a, one of the Trump guys riding along in vans inciting response, shooting rubber bullets I guess, or paintballs, apparently there was someone shot by someone in the crowd, with a bullet, killed.

“I think that person should meet the legal requirements of whatever that calls for, it should be investigated, and it should follow through on what needs to be done. Let the judicial system work. Let’s make sure justice is done.”

Though the Biden campaign had criticized President Trump’s planned visit to Kenosha, Wisc., saying that the city needed time to heal, Biden will be heading there tomorrow for his own campaign stop.

Biden also noted that, as president, and despite being a constitutionalist, he would put pressure on states, cities, and businesses to require people to wear face masks.