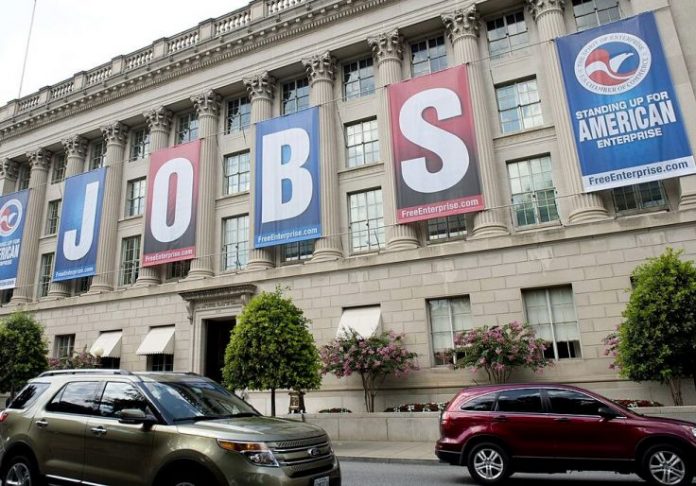 The U.S. Chamber of Commerce is endorsing 18 House Democrats who voted in favor of raising the federal minimum wage to $15, a policy the business group said would cost the country 3.7 million jobs.

The endorsements are part of a decision from the group’s political advocacy committee to back a slate of 23 freshman House Democrats and 29 freshman Republicans, according to an internal memo obtained by the Hill. Of the 23 Democrats endorsed by the chamber, 18 voted in favor of the Raise the Wage Act of 2019, which would more than double the federal minimum wage to $15 by 2025.

The endorsements could alienate top conservative donors and members, threatening the chamber’s historical status as a Republican electoral powerhouse. The group backed just seven Democrats in 2018—compared with 191 Republicans—and has given nearly $3.1 million in direct contributions to Republicans since 2000. The chamber was also a strong proponent of the 2017 tax cuts championed by President Donald Trump, crediting the move with “unleashing a new era of growth for the American economy.”

By contrast, the chamber has vehemently opposed the Raise the Wage Act. Executive vice president and chief policy officer Neil Bradley urged House members to vote against it in a July 2019 letter, citing a then-recent Congressional Budget Office report. The report found that the bill “would have disruptive impacts on employers, particularly small businesses, as well as negative effects on the job opportunities for first and lower skilled workers,” according to Bradley.

“The report stated that, when fully implemented, a $15 per hour minimum wage could result in as many as 3.7 million workers losing jobs and total real family income dropping by $9 billion,” Bradley wrote. He went on to pledge to “strongly oppose and work against the current politically driven proposal to more than double the minimum wage to $15 per hour.”

“It’s a bit inexplicable as to why the Chamber of Commerce would overlook this,” Higgins said. “Maybe they suspect that there isn’t enough support in Congress to get the Raise the Wage Act through, so they don’t think it will happen.”

The 23 Democrats backed by the chamber are among the top targets for Republicans looking to flip the House in November. The endorsement list includes embattled Reps. Abby Finkenauer (Iowa), Cindy Axne (Iowa), T.J. Cox (Calif.), Abigail Spanberger (Va.), Elaine Luria (Va.), and Andy Kim (N.J.). The six Democrats all voted in favor of the Raise the Wage Act, and all six seats are rated as toss-ups by the nonpartisan Cook Political Report.

Some Republican congressional hopefuls have already responded to the endorsements by labeling the chamber as out of touch. After the group endorsed Rep. Colin Allred (D., Texas), his Republican opponent—Dallas businesswoman Genevieve Collins—said the chamber “has completely lost its way.”

“When I speak to business owners large and small here in the 32nd district, they don’t care about an endorsement from the disconnected and bloated D.C. special interest U.S. Chamber,” Collins told the Dallas Morning News.

Some of the 23 chamber-backed Democrats vocally opposed the Raise the Wage Act. Rep. Joe Cunningham (S.C.) mirrored the business group’s criticism of the bill in a July 2019 statement, saying he refused to support legislation that would “cause 3.7 million Americans to lose their jobs” and “place a burden on Lowcountry businesses that they could not sustain.” Rep. Ben McAdams (Utah) also painted the bill as excessively liberal, saying “a solution that works in New York City or Los Angeles doesn’t work for Utah.”

Employment Policies Institute managing director Michael Saltsman told the Free Beacon that increasing the federal minimum wage to $15 would be especially harmful due to the coronavirus pandemic.

“Many of the lost jobs that would be brought on by the Raise the Wage Act are in the service industry, which has been absolutely devastated by the COVID-19 pandemic,” Saltsman said. “The idea that you would endorse an unprecedented increase in the minimum wage as a means to help small businesses runs totally contrary to the evidence.”

The chamber did not respond to a request for comment.