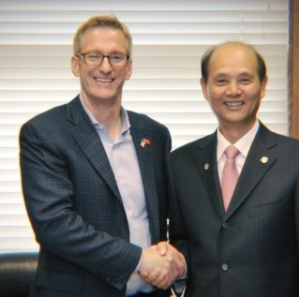 PORTLAND MAYOR TED WHEELER HAS COLLABORATED EXTENSIVELY WITH THE CHINESE COMMUNIST PARTY, HOLDING MEETINGS WITH SEVERAL PARTY OFFICIALS IN BOTH CHINA AND PORTLAND TO “DEEPEN” HIS CITY’S TIES AND PARTICIPATING IN INITIATIVES SPEARHEADED BY ENTITIES SUCH AS CONTROVERSIAL, GOVERNMENT-FUNDED PROPAGANDA FRONTS KNOWN AS CONFUCIUS INSTITUTES AND CHINA-BASED COMMUNIST YOUTH LEAGUES.

From meeting with high-level party members and delegations to visiting China in 2018, Wheeler’s liaising with the Chinese Communist Party, which the Federal Bureau of Investigation (FBI) has been “actively looking” into its involvement in riots currently plaguing American cities, is far-reaching and concerning.

Wheeler’s Portland, which has become ground zero for radical, Marxist activism, has also seen American lives lost, including Jay Bishop, who appears to have been targeted for supporting President Trump.

In 2017, San Francisco’s Chinese Communist Party Consul General Luo Linquan visited Oregon to extoll the merits of deeper U.S.-China ties and China’s Belt and Road initiative. The controversial initiative is viewed by many as the Chinese Communist Party’s paramount scheme to extend its economic and political power across the world via debt-inducing loans.

Former Secretary of State Rex Tillerson likened it to “predatory economics,” and State Department officials have described it as a “made in China, made for China” initiative.

During the trip, however, Luo met with Wheeler who praised “deepening” cooperation between U.S. and China and insisted his city was “willing to strengthen the ties of communication and exchanges with China in the future.”

Luo also spoke at Portland’s University Club, where he addressed Wheeler’s constituents and “encouraged Oregon enterprises to take their own advantages and actively participate in the construction of the [Belt and Road] Initiative.”

In response, the Portland audience “highly praised the speech” and vowed to “promote Oregon’s cooperation with China.”

Wheeler also led a 30-person delegation to China in April 2018 to commemorate the 30-year anniversary of Portland’s “sister city” relationship with the Chinese city of Suzhou. “Contingents from the City of Portland government” also attended the trip.

While visiting, Wheeler participated in a publicity stunt promoted by Chinese state media where he planted a commemorative tree alongside Suzhou Mayor and Chinese Communist Party apparatchik Li Yaping.

Wheeler shared the video to his social media platforms:

The trip sought to bolster Portland’s ties to the Chinese Communist Party, even bringing the state-run Suzhou Museum and Portland Art Museum to sign a memorandum of understanding to cementing a “sister museum relationship.”

And in July of the same year, a delegation of Chinese Communist Party apparatchiks visited Portland to plant a rose bush and a tree to symbolize the friendship between the two cities.

State-run media outlet Suzhou Daily, which prior to Wheeler’s tenure had embarked on a media delegation which toured The Oregonian, organized an art contest “to highlight Suzhou’s progress in the past 40 years,” with the top submissions from Chinese citizens being displayed in Portland’s City Hall, where Wheeler’s office is located.

The initiative had deep Communist roots: it occurred “under the guidance” of Jiangsu Provincial Committee of the Communist Party of China and was organized by entities including the Communist Youth League Suzhou Municipal Committee.

Despite this, Wheeler addressed the opening ceremony for the exhibit and hand-signed congratulatory letters for each participant.

Throughout Wheeler’s joint efforts with the Chinese Communist Party, he has repeatedly associated with Confucius Institutes. These controversial programs bankrolled by the Chinese government masquerade as language learning initiatives but are on the Federal Bureau of Investigation’s (FBI) radar for intellectual property theft, espionage, and propaganda.

High-level CCP apparatchiks have even described the institutes as “an “important part of China’s overseas propaganda set-up.”

The Confucius Institute at Portland State University, however, has sponsored concerts and galas at which Wheeler has attended, and, in multiple cases, spoke.

For example, in September 2017, Wheeler spoke at a gala honoring a delegation of visiting Chinese Communist Party officials, where a Portland-based Confucius Institute received an award for its educational contributions. What’s more, at the gala, the Director of Suzhou Foreign Affairs Office was granted the status of “Honorary Citizen of Portland.”

In Wheeler’s Portland it’s clear: the Chinese Communist Party is more welcome than President Trump and his supporters.
Share Our Work