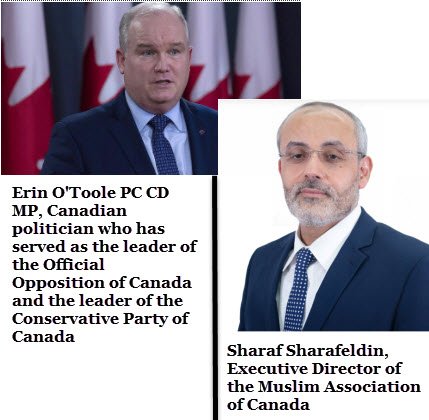 The official opposition to Islamo-pandering Prime Minister Justin Trudeau’s minority Liberal government is the Conservative Party of Canada, which has a new leader, Erin O’Toole. He’s already being pressured by two questionable Muslim lobby groups: the Muslim Association of Canada (MAC) and the National Council of Canadian Muslims (formerly CAIR-CAN, with historic ties to an unindicted co-conspirator in a Hamas jihad terror funding case, the Council on American-Islamic Relations).

Sharaf Sharafeldin, Executive Director of the Muslim Association of Canada (MAC), threatened O’Toole that he will lose the Muslim vote if he does not kowtow to their demands. Sharafeldin stated:

This is untrue. If anything, Andrew Scheer shut down reasonable discourse regarding jihad violence in order to appease agenda-driven Muslims, but evidently he didn’t do enough. For example, Scheer made headlines when he threw the Tory MP Michael Cooper out of a Commons committee hearing involving “online hate” after Cooper’s confrontation with a Muslim witness who had become provocative.

Sharafeldin also spreads propaganda about Stephen Harper, who as Prime Minister, was very much committed to human rights and equality of rights for all, as opposed to special treatment for one group over another. Harper also demonstrated a commitment to religious freedom when he installed Canada’s Office of Religious Freedoms in the Foreign Affairs Department — in recognition of persecuted minorities everywhere. The Trudeau Liberals shut down this office almost immediately after Trudeau was elected in 2015. Harper’s problem as far as the MAC is concerned was that he was not an Islamo-panderer, prone to being bullied.

Erin O’Toole has already displayed an inclination to compromise democratic values when he found himself at the center of bitter infighting and “Islamophobia” accusations against his opponent Jim Karahalios prior to the party’s leadership convention in August. The scandal centered around Karahalios challenging O’Toole’s Muslim campaign chair Walied Soliman over Soliman’s support for Sharia financing and associations with the MAC. Karahalios was ultimately ejected from the leadership race, undemocratically.

The Muslim Association of Canada’s interest in O’Toole and its potential influence over his decision-making is a matter of concern. The MAC is a self-described Muslim Brotherhood organization. This was featured not long ago on the About MAC section of its web page (although when attention was brought to it, it disappeared):

MAC roots are deeply enshrined in the message of Prophet Mohammad. It’s modern roots can be traced to the vigorous intellectual revivalist effort that took hold in Muslim societies starting in the early twentieth century. This revival aimed at reconciling faith with the challenges of modernity and providing a clear articulation of balance and moderation in understanding Islam. In the Arab world, this revival culminated in the writings of the late Imam Hassan al-Banna and the movement of the society of Muslim Brothers (commonly known as the Muslim Brotherhood). Al-Banna’s core messages of constructive engagement in society, focus on personal and communal empowernment, and organizational development had a deep impact on much of the Muslim world. 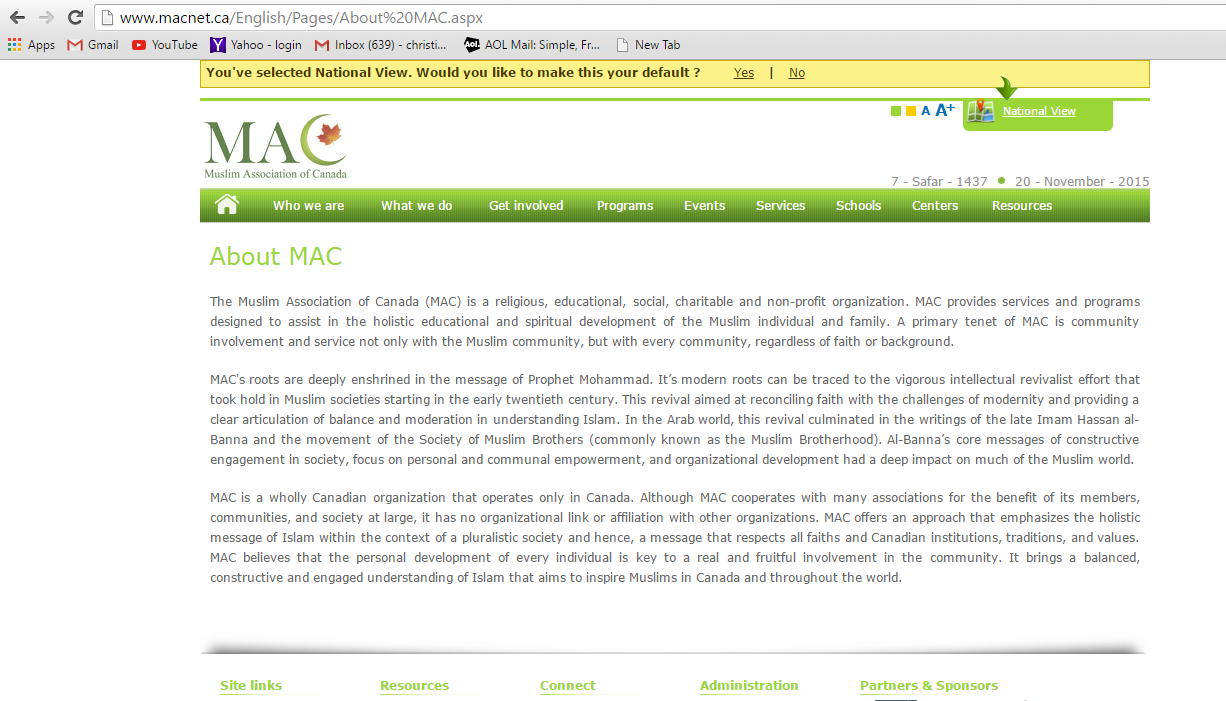 Canadians need to be watching closely.

The MAC is not the only Muslim lobby organization that is pressuring O’Toole. The NCCM is also taking a run at him.

The NCCM used the controversial Bill 21 to wield its heavy-handed influence. Bill 21 is a secularism law which bars some public sector employees in the province of Quebec from wearing religious symbols in the workplace. Most prominently featured in the media, and in religious rights and freedoms debates, was (unsurprisingly) the right of Muslim women to wear veils. In fact, it was widely believed that the misogynistic Islamic veil was the impetus for the creation of Bill 21. Although the Supreme Court of Canada decided that it would not hear any bid to suspend Quebec’s secularism law, the National Council of Canadian Muslims refused to accept the decision, and vowed to continue fighting the law in court.

The NCCM stated that it was “disappointed to see the leader of Canada’s Official Opposition, Erin O’Toole, appear to take a pro-Bill 21 stance in an interview.”

So given the NCCM’s disappointment with O’Toole, it decided to take matters into its own hands and apply pressure. A followup statement indicated that the NCCM was successful in bullying him:

After NCCM and others engaged with his Office, we appreciated the clarification that followed, where Mr. O’Toole’s Office stated clearly that he was “personally opposed” to Bill 21.

The NCCM also has expectations of ALL elected officials, as it states:

While we appreciate Mr. O’Toole’s stated opposition to the Bill, Canadians need clear and consistent condemnation of Bill 21 from all elected officials.

We promised to defend Canadian civil liberties and we will continue to keep that promise.

By “Canadian” civil liberties, he really means special treatment for Muslims. The NCCM has been at the forefront of pushing for “Islamophobia” Charters in major Canadian cities. It also contributed to establishing a freedom-threatening definition of “Islamophobia” at the Toronto District School Board. “Islamophobia” was defined as “fear, prejudice, hatred or dislike directed against Islam or Muslims, or toward Islamic politics or culture.” Canadians have every right to dislike or disapprove of any human rights-abusing ideology or such elements of any culture, but the NCCM does not advocate for that right. B’nai Brith expressed concern, stating that if that definition of Islamophobia was enforced, it:

…could lead to punishment for students or teachers who display “dislike” toward the persecution of LGTBQ people in the Islamic Republic of Iran, harsh restrictions on women in Saudi Arabia, and Palestinian terrorism against Israelis, all of which are examples of “Islamic politics”.

Two months ago, the American Center for Democracy exposed a question posed by the same Mustafa Farooq, who boasted about protecting “Canadian liberties.”:

How are we Muslims going to recreate Cordoba [Caliphate/ Islamic State] in Edmonton/Toronto/Montreal/any Canadian city? We have a massive task ahead of us, but I really believe that it is one at which we can succeed, one in which we erase these artificial “nation-state” identities, and move together to pursue Jannah [paradise].

O’Toole’s next-level campaign for the leadership of Canada as its Prime Minister should depend — among a list of general attributes for any leader — on his loyalty to all Canadians; his protection of the freedom of speech, which is under attack in Canada; and his ability to be a leader, not a follower of any special interest groups. He should also recognize that Islamic supremacists generally do not vote Conservative, despite what they might tell him.

Some worthwhile points to note:

In the words of the Muslim Association of Canada: Erin O’Toole must make amends to garner Canadian Muslim votes in the next election.

But what influence will that have on Canadian society, which is already under M-103, and is experiencing many other troubling Islamic supremacist advances? 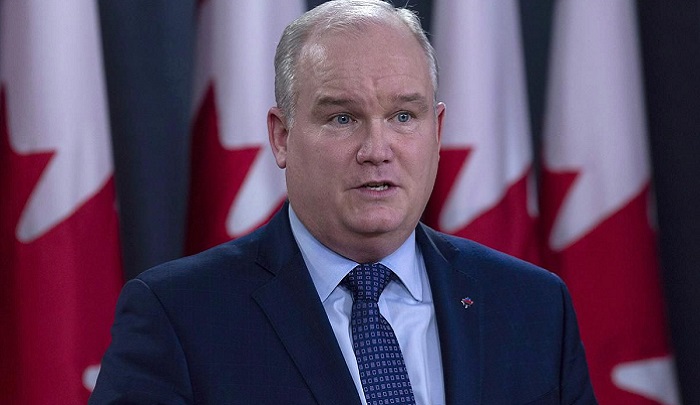