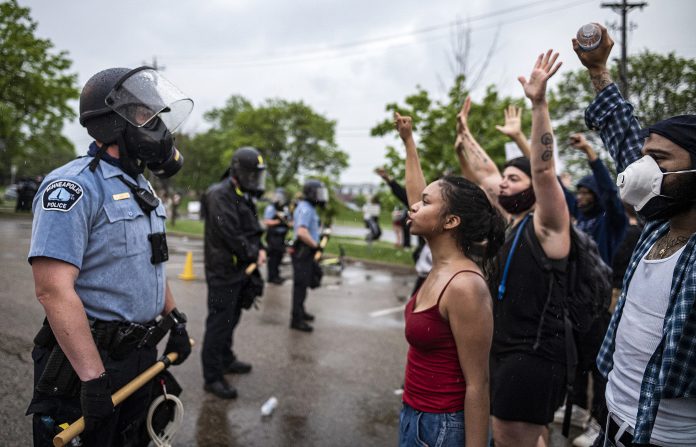 If they get a fair trial, a questionable proposition at best, Minneapolis police officers charged with murdering George Floyd should be acquitted.

Let’s consider new, undisputed evidence, beyond the initial bystander’s video that we’ve all seen, to understand why.

On Memorial Day, around 8 PM, Minneapolis Police are called to a local convenience store.  Two suspects passed a fake $20 bill to buy cigarettes.  When police arrived, the shop manager pointed across the street, where three suspects sat in a parked vehicle. George Floyd sat behind the wheel.

When the officers crossed the street to investigate, two other suspects, another man, and a woman, both black, stepped from the car and politely cooperated.

But George argued and disobeyed ten separate commands from officers to keep his hands up. After the tenth order, he finally put his hands on the steering wheel as instructed.

As George protested, police walked him across the street to the police cruiser, the vehicle shown in the bystander’s video.

That bystander’s video, isolated alone, implies that the officer cruelly forced George onto the ground, then callously put his knee on George’s neck, causing George to cry out, pitifully, “I can’t breathe.”

But when a Minnesota judge authorized the release of police body cam footage, a completer and more different story emerged.  First, the police never wanted George on the ground at all, and frantically tried getting him into the back of their squad car.

But Floyd, a strong six-feet-eight-inches tall, fought police every second, and tried pushing his way out. Police video shows George repeatedly saying, “I can’t breathe” long before he was on the ground, and before Officer Chauvin employed the infamous knee-restraint tactic.

Claiming to be “claustrophobic” as they ordered him into the back seat, George Floyd demanded to be placed on the ground. So, the officers did not thrust him down to the ground and then put their knee on George’s neck, as the bystander’s video suggests.

Let’s delve into the evidence.

From Officer Thomas Lane’s body camera, at 8:09 PM, officers approached George’s vehicle, tapped on the window, instructing him to either put his hands up or put his hands on the steering wheel. But George refuses.

At 8:17 PM, officers walk George across the street. He keeps arguing, as they order him into the back of the squad car.

“I’m claustrophobic,” he claims, twice, resisting as they again order him to sit in the back seat. He screams, fights and resists getting in the squad car.

At 8:18:08, still standing beside the car and fighting the officers, he says, for the first time, with no knee on his neck, “I can’t breathe, officer!”  At this point, police are still ordering him into the back seat.

A bystander urges George to stop fighting. “You can’t win,” the bystander says.

Police push him in the back seat. He keeps resisting.

At this point, George had demanded to be laid on the ground four times and said “I can’t breathe” at least six times, while in the back seat of the squad car, with no knee on his neck.

Of course he can’t breathe. A fentanyl overdose stops a man from breathing.

George fought the officers non-stop for over ten minutes before officers finally removed him from the car and put him down on the ground, beside the squad car, as George himself demanded.

Dr. Baker reported Floyd had 11 ng/mL of fentanyl in his blood, adding, “If he were found dead at home alone and no other apparent causes, this could be acceptable to call an OD. Deaths have been certified with levels of 3.”

In other words, while levels of 3 ng/mL have caused fatal fentanyl overdoses. George ingested nearly four times that amount, or 11 ng/mL of fentanyl, in his bloodstream.  In another document, Dr. Baker said, “That is a fatal level of fentanyl under normal circumstances.”

Granted, mounting political pressure led to subsequent private autopsy reports, paid for by the family, showing the cause of death as a combination of both fentanyl and asphyxiation from the officer’s knee.

Of course they do.

But the prosecution, to obtain a conviction, must prove guilt beyond a reasonable doubt. They must prove that the officer’s knee, and not the massive fentanyl dosage, killed George Floyd.

Not only that, but the infamous, “knee-technique,” which should be banned, was authorized by the Minneapolis PD.  Officer Chauvin followed authorized procedure, a technique for keeping a suspect on the ground, after George Floyd had fought officers for over ten minutes, and after, only — and this is the kicker — George requested, repeatedly, to lay on the ground.

But Chauvin’s knee is a red herring. The issue here is fentanyl.

Here’s how the respected website, WebMD, describes the effects of fentanyl:

“[F]entanyl has rapid and potent effects on the brain and body, and even very small amounts can be extremely dangerous.

“It only takes a tiny amount of the drug to cause a deadly reaction,” … “Fentanyl can depress breathing and lead to death. The risk of overdose is high with fentanyl.”

Here’s what the CDC says about fentanyl. “It is 50 to 100 times more potent than morphine.” https://www.cdc.gov/drugoverdose/opioids/fentanyl.html

Of course George couldn’t breathe — because fentanyl, mixed with methamphetamines, kills breathing.  Despite the bad optics, “I can’t breathe” was not because of the officer’s knee.

The medical examiner’s statement on lethal fentanyl, and the previous protestations of “I can’t breathe,” even before he got into the back seat of the squad car, and long before Chauvin applied the notorious “knee” technique, shows that George was already dying from the lethal fentanyl overdose before officers put him in the back seat of the car. That fentanyl, with methamphetamine ingestion, and cannabinoids — that’s right, George popped some meth alongside the fentanyl, plus a little reefer too — raises more than a reasonable doubt in favor of these policemen.

Here’s the prosecution’s problem – proving beyond a reasonable doubt that it was the officer’s knee, and not the massive fentanyl overdose, that killed George.

No one can prove, beyond a reasonable doubt, not in this case, that Chauvin killed Floyd, not with any intellectual honesty. George overdosed on fentanyl, and mixed it with meth, and reefer. That’s why he’s dead. Without the overdose, George Floyd would still be alive. The officers should be acquitted.

Which begs the question, who killed George Floyd?

Don Brown, a former U.S. Navy JAG officer, is the author of the book “Travesty of Justice: The Shocking Prosecution of Lieutenant Clint Lorance.” He is one of four former JAG officers serving on the Lorance legal team. Lorance was pardoned by President Trump in November of 2019.  Brown is also a former military prosecutor, and a former Special Assistant United States Attorney.