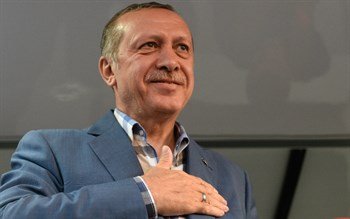 Amid the recent flow of inconceivable peace deals in the Middle East by President Donald Trump, Turkish President Recep Tayyip Erdogan has a plan of his own that’s unfolding in South Asia and beyond.

Earlier this month, Zee News reported Indian Security agencies “are increasingly getting concerned” as they anticipate the use of Pakistan-based terror groups by Erdogan (pictured) to “trouble India and boost his popularity among South Asian Muslims.”

OneNewsNow spoke to Animesh Roul about the development. Roul is a founding member and executive director of the New Delhi-based policy research group Society for the Study of Peace and Conflict (SSPC).

“Turkey-based entities and individuals have been facilitating a group of Indian origin extremists’ travel to Syria and Iraq and fight alongside the Islamic State,” the counterterrorism analyst explains. “Turkey funds several Islamic organizations in the region – India, Pakistan, and Bangladesh, specifically – to promote Islamic education and activism with scholarship and funds through its state-backed religious affairs agency, Diyanet.”

Turkey also supports Rohingya refugees for “their rehabilitations and repatriations to Myanmar,” he adds.

Each move, he considers part of “Erdogan’s argument for uplifting oppressed Muslims across the world – [which has] resonated well with anti-Jewish and anti-Hindu countries or people.” He offers the resurrection of Istanbul’s Hagia Sophia as a mosque as one example of how Erdogan is “playing to the gallery.”

Roul names a few other examples, including the Turkish regime’s funding of Kashmir-based separatist groups, Islamist preachers and activists (e.g., fugitive Zakir Naik), as well as Islamic institutions in southern India, especially in Kerala. While illustrations “[hide] in the garb of religious studies and outreach,” he considers them to be purposefully problematic for India.

The specialist in counterterrorism, terror financing, and armed conflict in South Asia argues that “past statements and developments relating to jihadist groups and leaders suggest that the present leader and his followers are largely sympathetic towards these Islamist groups and their spiritual leaders.”

For this reason, Roul contends Turkey’s territory has been used as a transit point for foreign fighters and also the passage for arms and ammunition to Syrian territory, albeit with the help of local criminal and extremist networks.

“The government of Turkey under Erdogan, along with an agency like Diyanet, is certainly working towards a larger role in the Islamic world and more in the predominately populated Muslim countries such as India, Pakistan, Bangladesh and Malaysia,” the SSPC executive director reveals.

“The country has been accused of – and is mostly responsible for – cross border movements of foreign fighters and jihadis, along with arms and ammunitions to neighboring Syria and Iraq since 2014.”

While Turkey considers both ISIS and al Qaeda to be terrorist groups and is itself a victim of Islamic State terrorism in the past, its track record in containing their operations has been limited or selective, at best, he notes.

Although there is lack of evidence regarding any direct role of Turkey in facilitating IS or al Qaeda leaders and foot soldiers, Roul indicates the problem is that several Turkish criminal and pro-jihadi persons have actually played a role in facilitating the flow of foreign fighters and firearms into conflict zones, in part, by pursuing an open-border policy.

Interestingly, Roul says Turkey is responsible for supporting a large number of recruits associated with a myriad of terrorist groups operating in the region in the guise of deradicalization and rehabilitation. And as he explains, “[the Turkish regime] is sympathetic to the Islamists (both al Qaeda and Islamic State) as long as the jihadists target Western societies and fight for Islam.”

He believes Turkey under Erdogan is “dreaming to re-establish the influence of Islamic Caliphate in a legitimate, political way” – not particularly through the way of jihad espoused by al Qaeda or Islamic State.

While protecting the Muslim Ummah (global community of Muslims) in the region is important to the current president of Turkey, Erdogan’s vision for the future clearly extends far beyond South Asia. Erdogan is trying to “revive the aura and influence of Ottoman Caliphate,” Roul explains.

On the heels of the historic peace deals between Israel and Arab nations, Turkey aims to capitalize on President Trump’s plan for peace and stability in the Middle East within the Muslim community.

“Since Saudi Arabia and other Gulf countries are moving away from religion-based international politics,” Roul contends, “Turkey’s Erdogan sees greater opportunity to become leader of the Islamic Nations.”