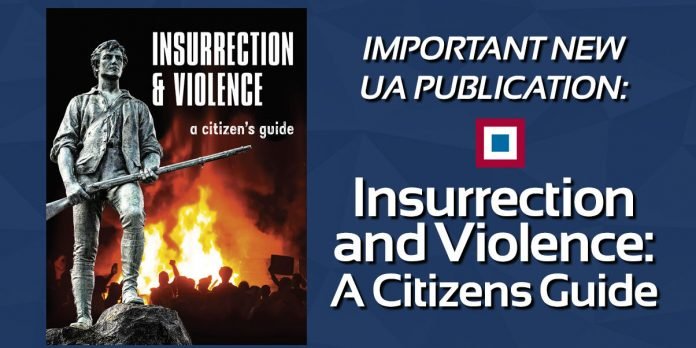 This book by Unconstrained Analytics is a guide for all citizens that are concerned with the chaos and violence occurring on the streets of America, regardless of political outlook. Though much of the violence clearly has political intent and purpose, that is outside the scope of this study.

The goal – to explain the violence, who is perpetrating it, and how to avoid becoming a victim, sounds simple enough. However, this is a very dynamic situation, the amount of information available is immense, and much of it is opinion disguised as the truth. To help with this task, the writers consulted with experienced and proven analysts on intelligence, crime, politics, revolutionary warfare, history, survival, and trauma medicine. They separated fact from perception, assessing the inexplicable, and delivering it concisely. It serves well as a handbook for the average American.

If you disagree with the assessment of the situation presented early in the book, stay the course; and take a close look at Chapters 3 and 4. Here, you will find valuable information designed to keep you and your loved ones safe. 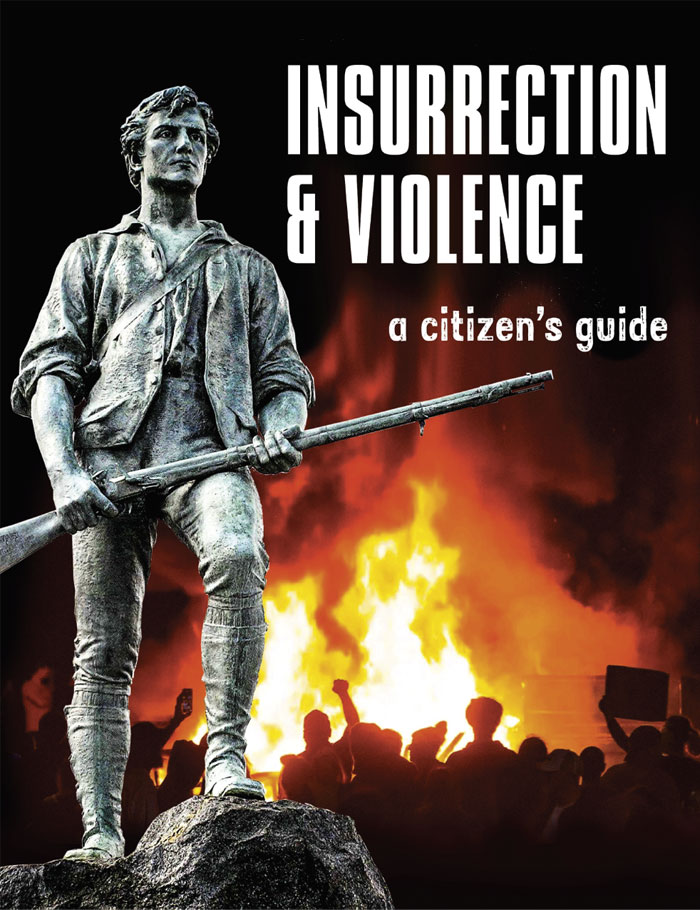 The United States of America is enveloped in crisis. Not since the Civil War, have we faced an insurgency and resistance movement with the capacity, capability, and very real potential to fundamentally change the structure of our republic. All, without passing a law. We are near a tipping point of insurrection and unlegislated change, from which the nation thus changed, will cease to be recognized or function as a representative republic.

The purpose for writing is to alert you to this fact – we are under attack by an ‘insurgency syndicate’ employing unconventional warfare tactics. The North American Insurgency Syndicate (NAIS) is currently gaining strength and they are on the offensive. This book endeavors to deliver an understanding of the insurgency, their goals, strategy and tactics. Then, to provide a framework to respond and protect your family, your property, your freedom, and our country.

As you read about violent insurgent groups, and their goal to fundamentally change our form of government, many a reader may be asking themselves “But, what can I do?” A rational response to this question is the motivation for our project. We offer a guide to assess your current position, analyze your risk, and help you make a reasoned plan to protect you, your family, and further; to provide you ways in which you can help the Nation.

For, if well-meaning citizens do nothing – do not recognize the danger, do not vote, do not volunteer at polling locations, do not influence others, do not prepare for their own defense, and do not push back against enemies of the Republic, then they are ceding space and power to the insurgents. The consequence of citizen inaction, at this perilous moment, is to put at risk the Constitution, our way of life, liberty and the pursuit of happiness. If law-abiding patriots across the country do not take prudent action, if they remain subdued and silent, then our nation will be fundamentally altered and cease to function as a republic.

We begin by increasing your “situational awareness.” The book describes the current situation in the United States – that we are at a critical point where the NAIS is successfully exploiting a national emergency to rapidly gain strength. We provide a synopsis of the various and disparate insurgent organizations and movements that are involved in direct-action violence, harassment, agitation, and social media attacks.

Then we explore their syndicate structure. At the tactical level, the NAIS relies upon self-organizing groups of insurgents united for insurrection. The syndicate, waging unconventional warfare with new and innovative tactics, intends to change or overthrow the government.

At the strategic level, a clandestine organization has formed. It has built a hidden infrastructure with a shadow government, financial structure, political operations, media outreach, and international engagement. They have infiltrated counter-state, underground operatives into most federal, state and local government institutions. The NAIS is using a determined and effective strategy with a tactical ground fight, unrestricted political warfare, and unmatched information operations.

We discuss the support that is required for the NAIS to be successful, and the support they are now receiving. Non-profit, charitable, and other entities are used to distribute funds to the NAIS. This is accomplished by washing money through multiple layers of numerous, geographically dispersed, and legitimate organizations.

In addition to domestic funding, the NAIS is receiving international support. Both China and Russia are involved because they directly benefit from U.S. instability.

There is evidence that China has been conducting a “Stealth War” for some time against the U.S. [Spalding, Robert, Brigadier General, U.S. Air Force (Retired) Stealth War, How China Took Over While America’s Elite Slept. Manhattan, NY: Penguin Random House.]

The book explores the role of academia, the mainstream media, social media corporations, government institutions, and unions, as it relates to the success or failure of insurgent activity. This includes political cover provided by some parts of the Democratic Party.

The greatest advantage the NAIS holds is their weaponization of social media platforms. With this weapon, they dominate information and influence operations. The strategic power wielded in this regard, is unmatched in modern warfare. With nearly complete freedom of action, the NAIS uses social media platforms to recruit, train and mobilize the force. They use it for secure communications, to conduct operational planning, and coordination of elements. Seemingly at will, they direct, control and rapidly change the media narrative to justify and legitimize violent actions. With great impact, it is used to attack and delegitimize dissenting groups in an effort to force silence or conformance. Compliance has become so engrained in parts of society that a new ‘Cancel Culture’ has emerged, which refuses fact-based debate, intellectual discussion and disagreement. Sadly, and perhaps unwittingly, much of the media, many in academia, and some in the Democratic party are complicit in this weaponization.

After learning about the resistance movement, you may be tempted to ask yourself if this is real, or just another conspiracy theory. The book lays out the facts and analysis that unmask the insurgency groups – some following communist ideology, some socialist, some anarchy, and some a confusing cocktail of all three ideologies. We explain why this is different from the 1960s student uprisings and why it poses a significantly greater danger.

History provides many examples of past insurgent organizations with Marxist-Leninist-Maoist ideology where they fully or partially achieved their end state. These revolutions either overthrew the government, pushed leaders out of office, or forced the government to the negotiation table. In all of those cases, the existing government and its underlying institutions and structure were significantly or fundamentally altered.

This is not a study in ancient history. Many successful revolutions have occurred recently, and often to democratic countries with free elections. The Color Revolutions and Arab Spring movements that occurred over the past few decades look similar to the Black Lives Matter Movement. Indeed, we are likely witnessing the greatest Color Revolution of them all.

When part of the citizenry is seduced by Marxist-Leninist-Maoist (M-L-M) ideology, and especially, when the majority of the population is scared, silenced and subdued – the conditions are right for successful revolution. It is what permits a determined few to organize, control and coerce millions. This formula is what led to the success of many Color Revolutions in recent years. Using cell phones and social media platforms, these broad resistance coalitions united around a single cause, and rapidly grew to astonishing numbers. The massive protests, riots and targeted violence surprised and overwhelmed government counter measures, and consequently, most of these recent revolutions achieved significant levels of success.

Is the United States immune to such an attack?

We understand you are concerned about your protection and that of your family, friends and community. We describe prudent planning you can do now that will improve the safety of the reader and their family. We discuss how vital it is for your own protection, and the protection of the Republic to avoid being seduced, scared, silenced or subdued by the NAIS, their propaganda, and the narrative of the main stream media.

We provide a planning guide to help you make reasonable preparation should you be faced with insurgent or mob violence. It is designed to help you take rational and prudent steps to mitigate the risk from large protests, harassment and violent agitators. It will explain how to assess and avoid dangerous situations, and how to build a sensible plan that protects you, your family, friends, and community.

We discuss constructive ways to get involved and help fight back against the insurgency syndicate, its support, funding and political cover operations. We present support and volunteer opportunities you can pursue to help oppose insurgent forces on a grassroots and national level.

Remember you are not alone. Like you, there are millions of Americans concerned about the current insurrection and violence, and the danger it poses to the Republic, to them, and loved ones. There are a number of good organizations working to ensure that Americans are not seduced, scared, subdued or silenced by the NAIS. This group stands with you, and all that are dedicated to preserving the Constitution and a citizen’s right to life, liberty and the pursuit of happiness.

The final chapter provides resources to help you to build an Action Plan for your defense against dangerous insurgents and mob violence. It provides websites to consider as you prepare to protect family, friends, community and country. We also offer information and points of contact if you choose greater involvement, and would like to help defend the Republic against the growing insurrection.