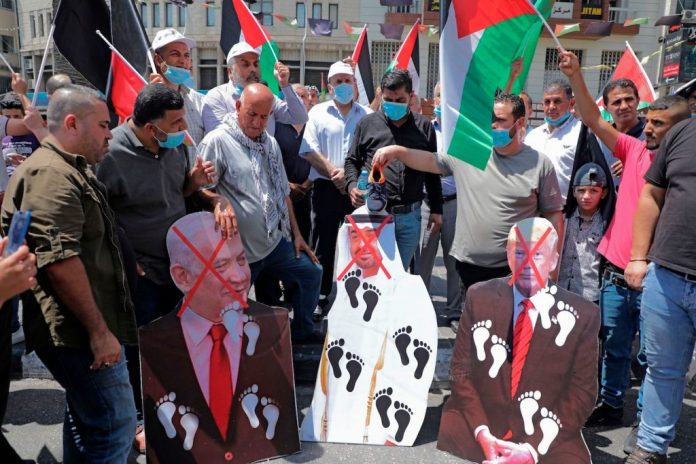 There are two sides to the war against Israel – the terrorist side and the political side. The missiles the Hamas’ terrorist regime in Gaza shot at Ashdod and Ashkelon and the anti-Israel demonstrations outside the White House which both happened during the signing ceremony of the Abraham Accords on the South Lawn, are a bitter reminder that the war against the Jewish state is far from over.

Even if US President Donald Trump’s rosiest prediction – that nine more Arab states will be normalizing their relations with Israel in the coming months – comes true, the rejectionist axis will maintain its war against Israel.

On the eve of the signing ceremony Tuesday, the Strategic Affairs Ministry published an assessment that said the opposite. According to the ministry, normalization of ties between Israel and many of its Arab neighbors will diminish the force of the boycott, divestment and sanctions (BDS) campaigns against Israel. Unfortunately, the ministry’s assessment ignores the nature of the forces behind the BDS campaign.

Broadly speaking there are two forces behind the BDS movements in the West. First, there are the Islamists and their Western front groups.

A decade ago, the so-called Arab Spring, which destabilized and toppled regimes in the Arab world split the Arab and Islamic world into two opposing blocs. On the one hand, the UAE, Saudi Arabia, Bahrain, and Egypt formed an anti-Islamist axis that stands opposed to the Iranian regime and the Muslim Brotherhood. Over the years, other states have joined this axis including Oman, Sudan, and Morocco.

Members of the anti-Islamist bloc turned towards Israel because they perceive the Jewish state as a powerful ally in their existential struggle with Iran and the Muslim Brotherhood.

Opposing the members of this bloc are members of the Islamist axis. Its leading members are Turkey, Qatar and Iran. Standing with them are their proxies Syria, Lebanon, the Houthis in Yemen and Hamas.

The civil war in Libya is a proxy war between the two axes.

And this brings us to the second side of the BDS movement – its Western side. Westerners involved in the BDS campaign don’t care if the members of the anti-Islamist bloc end their boycott of Israel. They are happy to suffice with the continuation of the boycott by members of the Islamist axis.

All members of the Red-Green axis share a deep-seated hostility towards Israel, the Trump administration and the anti-Islamist Arab bloc. Whereas for decades the Palestinians were proxies of the Arab world and their war against the Jewish state was an Arab proxy war, today the Palestinians are a proxy of the Red-Green alliance. They wage their multi-dimensional campaign against Israel with the active support and involvement of their Red-Green axis sponsors.

The Europeans and the international Left have taken a leading role in several aspects of the Palestinian war. They are the authors and primary engine behind the PA’s campaign to seize lands in Area C. They run the information and diplomatic efforts against Israel at the UN and the Hague tribunals. They fuel and finance political warfare campaigns aimed at delegitimizing the IDF and Israeli society more generally and subverting Israel’s legal system through their Israeli and Palestinian registered NGOs.

Members of the Islamist bloc finance and direct the terror forces in Judea and Samaria and Gaza and work in cooperation with their front groups in the West.

Tuesday, supporters of BDS who demonstrated outside the White House hailed from fifty anti-Israel groups that span the spectrum from the Marxist left, to the anti-Zionist, self-hating Jewish left, to Fatah and Hamas front groups.

The icy coverage the historic ceremony at the White House received from the liberal media in the US and from the European media made clear that the Western side of the Red-Green alliance isn’t interested in Middle East peace and stability. And the fact that neither senior Democrats like House Speaker Nancy Pelosi, nor representatives from any EU member nation aside from Hungary attended the ceremony underscores this reality still more. With or without Israel-Arab peace, under the Red-Green alliance, all aspects of the war against Israel will continue unabated.