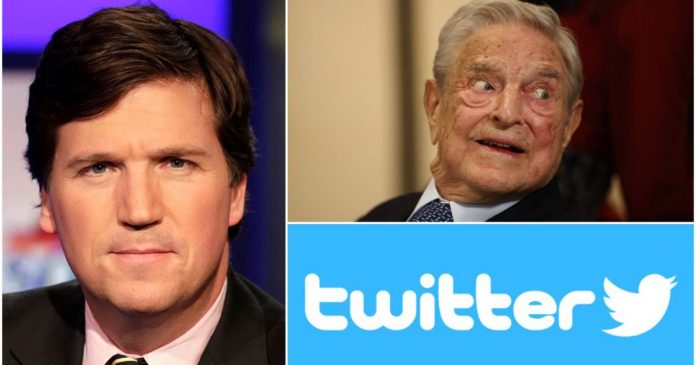 This is one of Tucker’s most powerful segments.

Fox News host Tucker Carlson blasted the “billionaire class” for their war on democracy that is being supported by Big Tech in one of his most powerful segments against the globalist elite.

Carlson noted that Twitter’s lies do not exempt them from culpability in enforcing thought control on behalf of the ruling class.

“We asked Twitter about this. They claimed it was all a mistake. They always claim that. They’re liars. Twitter didn’t block rioters from sharing a location of Mitch McConnell’s house, but stating obvious facts about George Soros? Twitter’s algorithm said this is dangerous content,” Carlson explained.

“This is censorship, obviously, but more than that, it is a metaphor for what is happening to our country and to our politics. America’s grotesquely distorted economy is making a tiny group of people richer than anyone has ever been in human history. Those people suddenly run everything, including our elections,” he continued.

“They are subverting our political system far more brazenly and with much greater effect than that dastardly Vladimir Putin ever dreamed of doing. Our billionaire class is the real threat to democracy. That’s obvious if you think about it, which is why you’re told you can’t think about it. Twitter won’t let you. Democrats never even mention it. It wasn’t so long ago when Joe Biden used to lecture us to get money out of politics. Remember that?” Carlson asked to conclude his rant.

The clip can be seen here:

Big League Politics has reported on how the billionaire class has exploited COVID-19 mass hysteria to consolidate power and squeeze more money out of the economy:

Research that the Institute for Policy Studies published on August 17, 2020 indicated that the dozen richest Americans now own more than $1 trillion in wealth.

One analyst described this development as “a disturbing milestone in the U.S. history of concentrated wealth and power.”

Omar Ocampo, an analyst at the Institute for Policy Studies said, “The total wealth of the Oligarchic Dozen is greater than the GDP of Belgium and Austria combined. Meanwhile, tens of millions of Americans are unemployed or living paycheck to paycheck.”

Jake Johnson of Common Dreams highlighted some of the key findings from the progressive think tank’s research.

IPS noted that the 12 leading American billionaires have witnessed their combined wealth increase by 40 percent — $283 billion — since the Wuhan virus outbreak, which has propelled policymakers to implement economically devastating shutdowns.

“During the first stage of the pandemic, between January 1 and March 18, the collective wealth of the Oligarchic Dozen declined by $96 billion,” IPS analysts Chuck Collins and Omar Ocampo wrote. “But their wealth quickly rebounded and surpassed their September 2019 Forbes 400 wealth level. The only exception is Warren Buffett, who is still $2 billion below his September 2019 wealth, but is currently worth $80 billion.”

“This is simply too much economic and political power in the hands of twelve people,” Collins, director of IPS’ Program on Inequality and the Common Good, declared in a statement.

Right-wing populism may be the only hope to overthrow this system that has enriched the few at the great expense of the many.