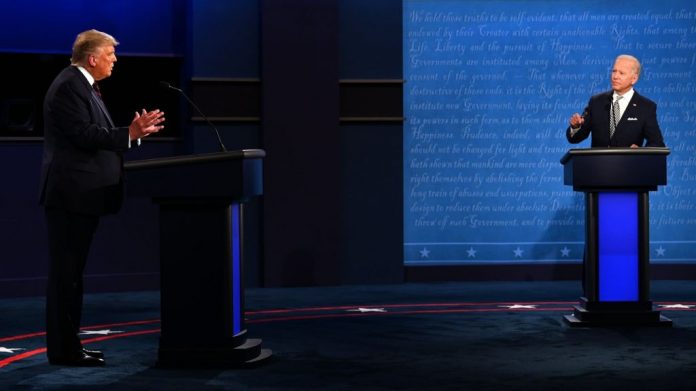 The set-up at the Presidential debate Tuesday night was so predictable that it hurt to watch. Moderator Chris Wallace made no effort to hide where he was going. He noted that President Donald Trump had repeatedly demanded that his opponent, Democratic nominee and former vice president Joe Biden condemn Antifa, the violent leftist group behind much of the ongoing destruction of America’s cities. Wallace failed to note that Biden refused to condemn Antifa and instead claimed, crazily that the organization is “an idea” not a group.

Wallace then asked Trump “to condemn white supremacists and militia groups, and to say that they need to stand down and not add to the violence in a number of these cities.”

“Sure, I’m willing to do that,” Trump replied. He then added, “Almost everything I see is from the left wing, not the right wing.”

Trump was right, of course. The rioting, looting, arson; the attacks on police, on business owners and on citizens sitting in their homes from Los Angeles to Kenosha to Washington, DC is the provenance of Antifa, BlackLivesMatter and related left-wing groups.

Then, going back to Wallace’s question, Trump added, “I’m willing to do anything. I want to see peace.”

That didn’t satisfy Wallace, (or Biden, who were tag-teaming the issue). The two demanded that Trump condemn.

Trump asked who specifically they wanted him to condemn. Wallace said, “White supremacists and militias.”

So Trump, trying to resonate Wallace’s request that he tell them to “stand down,” said, “Proud Boys, stand back and stand by.”

And the progressive media and Jewish progressive activists clapped their hands in glee. Here was the definitive proof that Trump is a white supremacist.

The Washington Post, the New York Times, television commentators all said his misstatement – “standby” instead of “stand down” — was proof positive that Trump was signaling to his Nazi guard that he wants them to take to the streets. The Jewish Democratic Council of America, which had just launched a commercial comparing Trump to Hitler pounced on his “standby” gaffe as proof they were right and Trump is the gravest danger to American Jews.

No one mentioned that Trump had condemned white supremacists twice in the same exchange or that Biden wouldn’t condemn the leftist rioters who – in addition to burning stores – have vandalized several synagogues since May, and reject the Jewish state’s right to exist.  [emphasis added]

Jewish progressives and Democrats have been playing this trick since the 2016 elections. In 2016, Trump was asked to disavow the endorsement he received from David Duke, the former Ku Klux Klan grandmaster and he did, repeatedly.

But in one satellite interview with CNN’s Jake Tapper, where Trump was having trouble hearing the questions, Trump gave a diffident response to the question. And Presto – Tapper, leftist Jewish activists and the Democrat party have used his cagey response as proof positive that Trump is a secret member of the KKK. The fact that he denounced Duke the day before the interview to a CNN reporter, denounced him again after his interview with Tapper and multiple times in the days and weeks and months and years that followed, was of no matter.

While condemning the neo-Nazis and their anarchist counterparts, Trump noted that there were “also very fine people on both sides.” And for that remark, which was nothing more than a statement of fact, Jewish progressives, Democrats, the media and Joe Biden continue to libel him as an anti-Semite and a racist.

The left’s denunciations of Trump as an anti-Semite have come at the same time that the Democrat Party’s hostility towards Israel and its supporters in America has become more pronounced with each passing day. Leftist anti-Semites have captured the party’s base and control the progressive grassroots. They have intimidated pro-Israel Democrats into near silence on Israel and have made hating Israel an electoral advantage in primary races.

The left’s rejection of Israel is now so overwhelming that last weekend, Rep. Alexandria Ocasio Cortez cancelled her participation in a Peace Now memorial marking the 25th anniversary of former prime minister Yitzhak Rabin’s assassination. Her move demonstrated that even Jewish progressives and an Israeli Nobel Peace Prize laureate who was killed for his efforts to appease the PLO are beyond the Pale for progressives today. Only Jews who reject Israel’s right to exist are acceptable among the smart set in the party.

The left’s embrace of anti-Semitism demonstrates that its hysterical claims that Trump loves Nazis is nothing more than projection. And this isn’t surprising.

Since 2016, the Democrats have repeatedly projected all of their prejudices, malicious actions and plans onto Trump and the Republicans.

Consider the issue of collusion with Russia. During the debate, Biden accused Trump of being “Putin’s poodle.” But just hours before, Director of National Intelligence John Ratcliffe sent a letter to the Senate Judiciary Committee revealing that in July 2016, American intelligence agencies “obtained insight” into an analysis by Russian intelligence officers that claimed then Democrat presidential nominee Hillary Clinton “had approved a plan to stir up a scandal” against Trump which involved “tying [Trump] to Putin.”

Clinton’s campaign paid for the infamous Steele dossier alleging corrupt ties between Trump and the Kremlin. The dirt file was compiled by former British spy Christopher Steele. Last week it came to light that Steele’s primary source for his file was investigated by the FBI as a Russian spy.

The projection of Democratic plans onto the Republicans continues still today. Indeed, their campaign is organized around a new one.

In early August, senior Democrat operatives held a series of election simulations. In all of the scenarios tested, the only electoral outcome that the Democrats were willing to accept was a clear victory for Biden. All other outcomes, including a repeat of the 2016 election results where the Democrat candidate received more overall votes but Trump won in the electoral college were rejected by Democrat activists and political leaders alike. The “Biden” in the simulation refused to concede the race. Democrat governors pledged to reject their voters’ verdict and to send pro-Biden electors to the electoral college. Three Democrat-run states announced they were seceding from the United States. Democrat activists began rioting countrywide. In one scenario, the Pentagon sent troops to the White House to forcibly remove Trump from the premises.

The notable aspect of the scenarios was their familiarity. Aside from the fact that Clinton did concede the election four years ago and no one seceded from the union, all the other things happened. Democrats rioted and protested. Democrat lawmakers impeached Trump over nothing. For the past four years, Democrats at all levels have referred to themselves as “the resistance” rather than the opposition because they reject the legitimacy of Trump’s presidency.

Shortly after the simulation was held, Clinton advised Biden not to concede the race. A group of Democrat former generals sent a warning letter to the Joint Chiefs of Staff noting that they are duty bound to uphold the Constitution which means ensuring that the election results are fulfilled.

All of these actions point to a basic fact. As was the case in 2016 and ever since, if Trump wins the election, the Democrats will refuse to accept the results. Their activists will riot and their leadership will plot to overturn the election results. They expect the army to physically remove Trump from office.

Then there is the issue of mail-in voting. In April, former president Barack Obama published a series of tweets promoting voting by mail. In large part due to Obama’s intervention, mail-in voting has become the signature cause for Democrats in this electoral cycle. Nearly 40 percent of votes are expected to be mailed in – an all-time record.

There are many problems with this. As Thomas Edsall reported in the New York Times, over the past two years, on average 6.4 percent of mail-in ballots have been deemed invalid everywhere they were used.

Earlier this week, 100,000 ballots sent to voters in New York City were invalidated.

Shoddy ballots are only one problem. There is also vote fraud. Mail-in ballots invite voter fraud, ballot harvesting and illegal disposal. Over the past two weeks, as the number of ballots being mailed in has steeply risen, reports have surfaced of postal workers dumping ballots. Investigative reporting organization Project Veritas this week exposed a massive ballot harvesting scheme carried out in Minnesota’s Somali community by allies of Rep. Ilhan Omar.

And this brings us to Democrat projection. Since the impeachment hearings last January, Democrat lawmakers and aligned media have been pushing the claim that Trump will refuse to accept the election results if he loses. Just as Trump is repeatedly asked whether he condemns white supremacists, he and his campaign advisors have been asked repeatedly by reporters whether he intends to concede if the results of the election are not in his favor. At Tuesday’s debate, Wallace continued the practice. He asked the candidates to pledge to accept the election results.

The President noted that the Democrats still haven’t accepted the results of the 2016 elections and tried to oust him from power through false allegations of collusion with Russia that Clinton invented while working with Russia. He also pointed out the ease with which mail-in votes can be, and allegedly already are being falsified by Democrats.

It is impossible to know how the election will pan out or when, if ever, the true results will be known. What is clear however is that if you want to understand who the Democrats are and what they are doing, all you need to do is look at what they are accusing Trump and his colleagues of being and of doing.