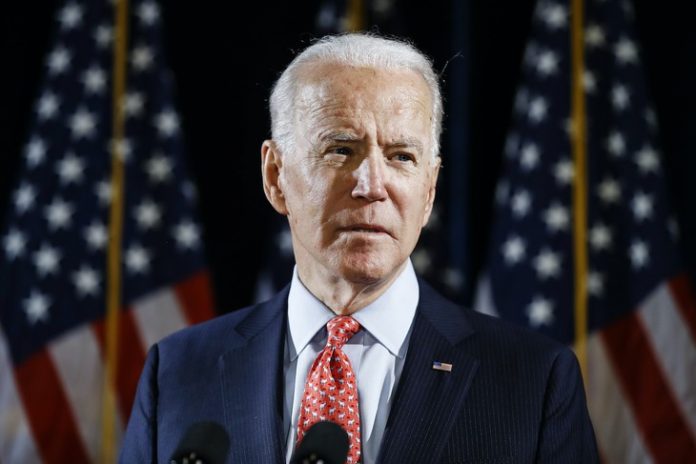 Liberals often mock conservative Christians for supporting a notorious sinner and philanderer in Donald Trump, but the Left has grown increasingly hostile to biblical small-o orthodox Christianity. Even the ostensibly moderate Democratic nominee Joseph Robinette Biden Jr. represents an insidious threat to the religious freedom of conservative Christians. He also represents a threat to Roman Catholics, even though he is himself a practicing Catholic.

How could this be? Biden’s rhetoric and policies single out those who adhere to traditional religious beliefs and moral convictions, aiming to limit their ability to live by their consciences and ostracizing them from polite society. The Democrat may outwardly campaign on a platform of unity and diversity, but his candidacy truly represents a threat to traditional religious believers.

Disqualified from the Supreme Court?

The most recent evidence of this insidious threat came last week, when a Biden staffer suggested that traditional religious beliefs that homosexual acts are sinful and that marriage is between one man and one woman should be so “taboo” as to disqualify someone from serving on the Supreme Court.

Politico contributing editor Adam Wren noted that President Donald Trump’s Supreme Court nominee Amy Coney Barrett “was a trustee at a South Bend private school that described ‘homosexual acts’ as ‘at odds with Scripture’ & said marriage was between ‘one man and one woman’ years after Obergefell v. Hodges.”

Shadi Hamid, a senior fellow at the Brookings Institution, responded, “Wait, why is this news? Isn’t this the standard position for any orthodox Catholic?”

Hamid responded, “to be fair, it’s the standard position for any orthodox Muslim or Jew as well…”

“True,” Rai acknowledged. Yet the staffer insisted that this perspective must be marginalized. “I’d heavily prefer views like that not be elevated to SCOTUS [the Supreme Court of the U.S.], but unfortunately our current culture is still relatively intolerant. It will be a while before those types of beliefs are so taboo that they’re disqualifiers.”

Rai suggested that presidents and the U.S. Senate should apply a religious test for Supreme Court nominations and confirmations. The Constitution explicitly forbids a religious test for service in government. Article VI Clause 3 reads in part, “no religious Test shall ever be required as a Qualification to any Office or public Trust under the United States.”

Nikitha Rai is just one Biden staffer. She doesn’t represent the entire Biden campaign, right? On the contrary, Rai’s insistence that traditional religious beliefs on marriage and sexuality should be taboo fits perfectly with the candidate at the top of the Democratic ticket.

Biden Staffer: Traditional Religious Beliefs Should Be ‘Taboo’ and ‘Disqualifiers’ for Public Office

“The dregs of society”

In 2018, Biden described conservatives who oppose LGBT activism as “the dregs of society.”

Speaking to the Human Rights Campaign (HRC), Biden attacked people who have “tried to define family” in the U.S. “Despite losing in the courts and in the court of public opinion, these forces of intolerance remain determined to undermine and roll back the progress you all have made. This time they, not you, have an ally in the White House,” he said of President Donald Trump.

“They’re a small percentage of the American people, virulent people, some of them the dregs of society,” Biden added. “And instead of using the full might of the executive branch to secure justice, dignity, safety for all, the president uses the White House as a literal bully pulpit, callously exerting his power over those who have little or none.”

As my colleague Paula Bolyard reported, Biden again spoke to HRC in June 2019. On that occasion, he called the Orwellian Equality Act his first priority. The so-called Equality Act would force biblical orthodox Christians to violate their consciences on LGBT activism. It would also open women’s sports and women’s private spaces to biological males, undercutting fair play and privacy. A broad coalition of diverse groups allied to oppose the Equality Act, including pro-lifers, religious freedom advocates, and radical feminists.

Yet of the Equality Act, Biden said, “I promise you if I’m elected president it will be the first thing I ask to be done. It will send a message around the world, not just at home.”

“This is our soul, da*mit, this is who we have to be… This is our real moral obligation,” the Democrat added. “Using religion or culture to discriminate against or demonize LGBTQ individuals is never justified. Not anywhere in the world.”

Interestingly, while Biden vocally condemns traditional believers in such harsh terms, he has remained curiously silent on the horrific attacks against Catholic statues and churches amid the George Floyd riots this summer — despite his Catholic identity.

Americans do not support discrimination, but Democrats have twisted the notion of discrimination in order to force Christians to violate their beliefs.

Christian baker Jack Phillips, for example, refused to bake a custom cake for a same-sex wedding, although he gladly sells all sorts of pre-made cakes to LGBT people in his shop. Yet the Colorado Civil Rights Commission ruled that he had discriminated against people on the basis of sexual orientation. He appealed the case all the way to the Supreme Court and won — because members of the commission displayed animus against his religious faith, comparing his views to those of the Nazis.

Even after this Supreme Court victory, Phillips again faced the commission. A transgender lawyer asked him to bake an obscene custom cake celebrating the lawyer’s gender transition. Phillips refused, citing his free speech right not to be forced to endorse a view with which he disagrees. The commission again found him guilty of discrimination, but it dropped the complaint in March 2019. The lawyer promptly sued Phillips. Christian florists, farmers, and other bakers have faced government sanctions for “discrimination” when they refused to celebrate same-sex weddings, exercising their rights to religious freedom, freedom of association, and free speech.

This year, Gov. Ralph Northam (D-Va.) signed legislation that will force Christian schools and ministries to hire people who oppose their religious convictions on sexuality and gender. The laws will also force these ministries — which hold that God created humans male and female — to open women’s sports and women’s restrooms to biological males, to refer to biological males by female pronouns if they “identify” as female, and to pay for transgender surgery in their health care plans.

A lawsuit challenging the new laws as unconstitutional charged that Virginia’s LGBT statues force “people of faith to adopt a particular government ideology under threat of punishment.”

This religious freedom battle in Virginia is just a small taste of what the Equality Act threatens nationwide.

Joe Biden’s opposition to the “discrimination” from the “dregs of society” represents a tragically mainstream view in the Democratic Party. Last year, the Democratic National Committee adopted a resolution condemning religious freedom defenses.

“[T]hose most loudly claiming that morals, values, and patriotism must be defined by their particular religious views have used those religious views, with misplaced claims of ‘religious liberty,’ to justify public policy that has threatened the civil rights and liberties of many Americans, including but not limited to the LGBT community, women, and ethnic and religious/nonreligious minorities,” the DNC resolution states.

The SPLC faced a devastating sexual harassment and racial discrimination scandal last year, and former employees outed the “hate” accusations as a cynical fundraising scheme. An attempted terrorist tried to kill everyone at a conservative Christian nonprofit due to the SPLC’s “hate group” accusation, but Democrats continue to cite the SPLC as a reliable arbiter of hate.

Biden’s running mate, Sen. Kamala Harris (D-Calif.), has proven one of the worst offenders. In May 2018, Harris launched an inquisition into the Roman Catholic faith of two of Trump’s judicial nominees — because they were members of the Roman Catholic fraternal order the Knights of Columbus (KOC). Harris also cited the SPLC in branding Alliance Defending Freedom (ADF), the conservative Christian law firm that defended Jack Phillips, a “hate group.”

While serving as California’s attorney general, Harris refused to defend the state law defining marriage as between one man and one woman — even though Californians had voted for it in 2008. Adding insult to injury, Harris rushed to officiate the first same-sex marriage after a court struck down the will of the people.

Animus against conservative Christians is a growing problem among American elites, and it arguably fuels the legacy media’s astounding ignorance of Christian doctrine.

In the book So Many Christians, So Few Lions: Is There Christianophobia in the United States? sociology professors George Yancey and David Williamson painstakingly document the presence of bias against conservative Christians, proving that it is as real as animus against Muslims and Jews. Indeed, Yancey’s most recent research shows that animus against Christians leads some people to support LGBT activism, even when they have a low opinion of LGBT people.

Democrats represent this Christianophobia in political form. Even though Biden is a practicing Roman Catholic, his candidacy represents an insidious threat to traditional Christianity, including orthodox Roman Catholic positions on sexuality and gender.

Those who support traditional marriage or the biological definition of sex as male or female will find their beliefs demonized and their religious freedom and free speech under fire in a Biden administration. It does not matter that supporters of traditional marriage or biological sex are a rather diverse group, including Roman Catholics, Protestants, Orthodox Christians, Jews, Muslims, even atheists and radical feminists. Biden’s presidency would represent a threat to all of them.