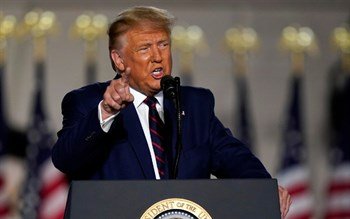 The “cancel culture” has plagued President Donald Trump and his supporters since he assumed office. But with Election Day just one month away, one of the president’s senior campaign advisors sees a path for a resounding Trump victory.

Corey Lewandowski tells OneNewsNow that the media’s embrace of the cancel culture has been an obstacle to conservatives in America. The former chief political adviser and campaign manager to President Trump admits being disgusted by “the cancel culture, the woke culture, [and] the culture that embraces the likes of antifa” – and he suggests the media should be obligated to tell every American what’s really happening across America, in places like Portland, Oregon, and other major cities around the country.

“It’s domestic terrorism. Marauders are running through the streets” destroying properties, homes, businesses, and places of worship, he notes. “Why? All for this notion that they’re mad at Donald Trump.”

Despite the media-driven assault on the president and his conservative base, the political commentator expects a favorable outcome for conservatives to rise up from the present chaos. “[Elections for a second term are] always about the incumbent president and their ability to prove their value to the American people,” he observes. “[The incumbent has] to prove why he needs a second term.”

And incumbents are easy to criticize, according to Lewandowski.

“While Joe Biden criticizes the president for things that he did or maybe didn’t do, [the senator] did nothing over the course of 47 years in office to help solve any of America’s problems,” says Lewandowski – making 2020 “all about being a pro-Trump year and reminding the American people that this president made promises four years ago and he’s delivered on nearly all of them.”

The co-author of “Trump: America First: The President Succeeds Against All Odds” is very confident about Trump winning the November election. He contends Republicans are “bullish” in three states Trump narrowly lost in 2016 – specifically, New Hampshire, Nevada, and Minnesota. Those voters, he says, are no longer taking a chance on an unproven presidential candidate, as these states have seen the policies and successes of Trump.

“They’ve benefited from them, and he’s going to win those three states in 2020,” Lewandowski concludes.

The numbers in Minnesota “have been getting better and better for Republicans” since the presidential candidacies of John McCain in 2008 and Mitt Romney in 2012, he points out.

“Minnesota was lost [in 2016] by about a point and a half, or just under 45,000 votes,” he states. And since Trump’s policies have helped the state, particularly in the region of the Iron Range, he is confident “more and more people of Minnesota are rejecting far-left liberal, socialist policies and will be voting for Donald Trump.”

In New Hampshire, less than 3,000 votes separated Hillary Clinton from Donald Trump in the previous “nail-biter” election. “But because of [President Trump’s] policies,” Lewandowski says, “a very low unemployment rate was attained and people are going to reward him for it.”

“What that means,” he concludes, “is that these two states combined will provide 14 additional Electoral votes. Couple that with what Donald Trump won last time, which was 306, and you’re potentially in line for a blow-out election over Joe Biden.”

Corey Lewandowski is co-author (with David Bossie) of the recently released book “Trump: America First: The President Succeeds Against All Odds,” which is available on several online bookstores.