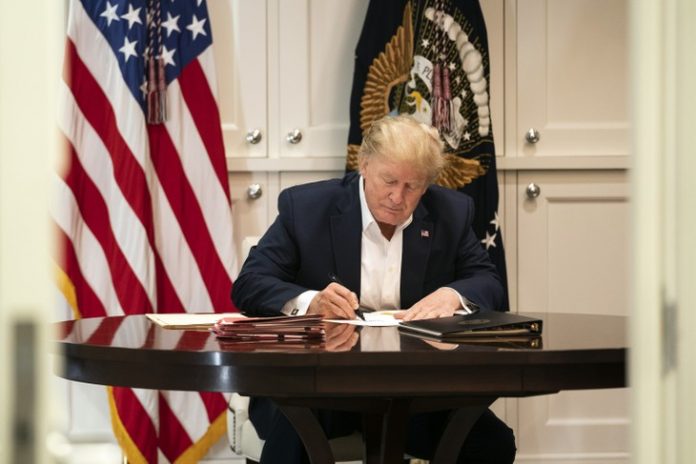 Well, that was a weekend, wasn’t it? I hope that Monday is starting off well for you, dear Kruiser Morning Briefing friends.

As we are all aware, there wasn’t a great variety of news stories to choose from over the weekend, just variations on a theme. Everything was obviously heightened when President Trump headed off to Walter Reed Medical Center on Friday evening. A nation already in crisis was thrown even deeper into it and, somehow, we muddled through the next two and a half days.

This week is going to be a long one too. President Trump may be released from the hospital as early as today, which would be wonderful news, for half the country at least.

I’m mentally exhausted from the awfulness from the Left since last Friday morning. Basic human decency is out the window and I don’t know if the other side will ever get it back. I spent a good chunk of the weekend shunning social media and drinking a strong IPA. That may be the plan every weekend going forward for the rest of the year, or until the election is finally over next June.

Joe Biden’s lack of stamina has been a frequent topic of conversation here at the Briefing for quite some time and I think it’s worth mentioning even more as the election draws near. The president’s health and stamina are certainly fair game, Biden’s should be as well.

This past weekend provided a stark contrast between the two men who want to lead the country out of the COVID nightmare. Ironically, Trump’s hospitalization gave us a perfect snapshot of the different energy levels of the two candidates.

President Trump recorded a video to reassure Americans that he was feeling better and that he was still hard at work. As Matt wrote, Trump was running the country from Walter Reed.

How did Grandpa Gropes do? It was another early one for him:

President Trump doesn’t seem to be letting his COVID-19 diagnosis slow him down. According to reports, he’s still working hard at his job.

But Joe Biden, once again, called a lid at 9:16 a.m. Eastern Time on Sunday morning.

How are the Democrats not embarrassed by this? OK, they’re the Democrats, so there isn’t much in the way of shame over there. We’ve all realized by now that virtually no one cares enough about Biden to make any of this stop.

As far as projections of presidential strength go, the ailing president looked ten times sturdier than Vice President Early Nap. I know whose hand I would rather have on the rudder of this national ship that’s being tossed about on turbulent seas. Sure, I’m just talking about optics here, but they are important in 21st century politics.

In the most recent “War for the White House” podcast, Stephen Green, Storm Paglia and I discussed whether POTUS might be able to turn this situation to his advantage somehow. We all thought that he might, especially given his reality television talent.

I seemed like he was able to do just that over the weekend. His ride outside to wave at supporters was politically brilliant and had the added bonus of triggering all of the right people.

We continue to pray that POTUS and FLOTUS recover quickly.

And I’m going to need something stronger than beer soon.