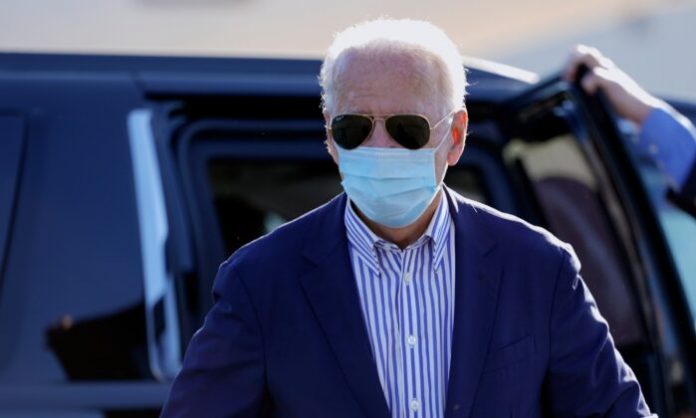 Democratic presidential nominee Joe Biden suggested that the voters don’t deserve to know whether he will pack the U.S. Supreme Court (SCOTUS).

The former vice president made the remarks on Friday during an interview with KNTV in Nevada.

Here is part of the exchange:

Reporter: “I’ve got to ask you about packing the courts and I know that you said yesterday, you aren’t going to answer the question until after the election. But this is the number one thing that I’ve been asked about from viewers in the past couple of days.”

Biden: “Well, you’ve been asked by the viewers who are probably Republicans who don’t want me continuing to talk about what they’re doing to the court right now.”

The Biden campaign didn’t respond to a request for comment immediately.

Barrett, a judge on the U.S. Court of Appeals for the Seventh Circuit since late 2017, is known for her conservative views on several important issues that are or are expected to be before America’s highest court including abortion, immigration, and Obamacare mandate and penalty, etc.

Her nomination hearing is scheduled to start on Monday.

If Barrett is confirmed, she would join Justices Neil Gorsuch and Brett Kavanaugh—Trump’s two other appointments—to form a 6-3 majority of Supreme Court justices who were appointed by Republican presidents.

Right after the death of Ginsburg, which is around one and a half months from the Election day, Mitch McConnell (R-Ky.) said that the Senate will give them a vote if Trump nominates a replacement of Ginsburg.

Biden insisted the nomination should happen after the November election instead.

Some top Democrats went further to threaten that they will pack the SCOTUS if Trump’s nominee is confirmed.

“If Sen. McConnell and @SenateGOP were to force through a nominee during the lame duck session—before a new Senate and President can take office—then the incoming Senate should immediately move to expand the Supreme Court,” Rep. Jerry Nadler (D-N.Y.) wrote in a Twitter post back on Sept. 19.

Court packing indicates expanding the number of justices in the Supreme Court, which is nine currently. The term has been commonly used after former President Franklin Roosevelt proposed to increase justices of the Supreme Court from nine to fifteen.

Both Biden and his vice president pick Sen. Kamala Harris (D-Calif.) refused to clarify their stances though they were pressed repeatedly to answer the question of whether they will pack the supreme court as some Democrats suggested.

Biden’s stand on SCOTUS is obscure from several perspectives.

He refused to release a list of his potential SCOTUS nominees before the election as Trump did in 2016 and before this election. He also refused to say if he will pack the supreme court if Barrett is confirmed.

Biden said Thursday that he will reveal his position on “packing” the U.S. Supreme Court after the election is over.

“You’ll know my opinion on court-packing when the election is over,” Biden told reporters during a campaign event in Phoenix.