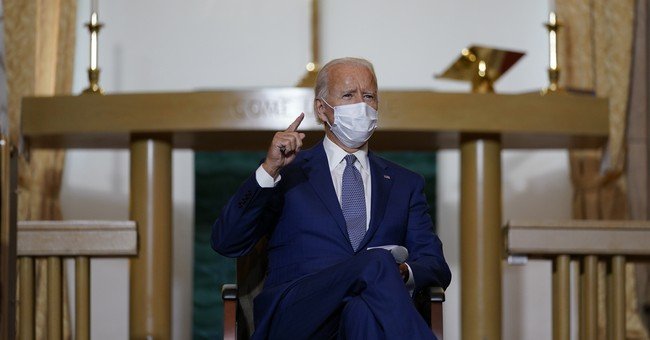 Mixing religion with politics is a recipe for disaster. Still, since Kamala Harris talked about religion during the recent vice presidential debate, it’s time to dispel the lies with a little truthsplaining.

During the debate, Kamala Harris said she and Joe Biden are people “of faith,” a bald-faced lie, a lie, unless Harris is talking about faith in the Democratic Party Platform, which functions as a kind of twisted Apostles’ Creed to the Democrat faithful.

Quite honestly, Democrats’ so-called “faith” is conjured out of whole cloth, as their platform represents just about everything God rejects. And when you implicitly or explicitly reject God, God rejects you. But don’t take my word for it, here’s God’s:

Romans 1:28-32: “Furthermore, just as they did not think it worthwhile to retain the knowledge of God, so God gave them over to a depraved mind so that they do what ought not to be done. They have become filled with every kind of wickedness, evil, greed and depravity. They are full of envy, murder, strife, deceit and malice. They are gossips, slanderers, God-haters, insolent, arrogant and boastful; they invent ways of doing evil…”

Consequently, the Democratic Party has become a repository for Christian knockoffs. Buffoons. Fools. A theoretical Star Wars Cantina scene of buck-naked clowns adorned in nothing but their self-righteousness, living out the old story of The Emperor’s Clothes–believing they’re somehow inoculated from accountability for their actions.

The journey to foolhood is a progression. First, you reject God because you don’t want Him controlling your life. Rejecting God always leads to self-worship and a belief in the lie that everyone is entitled to their own version of truth. Next, you start thinking you are the standard of truth and therefore have the right to decide what’s true for everyone else, which is at the core of today’s Democrat Party.

And currently, the Biden campaign is fishing for fools.

Just weeks before the election, Democrats are working at a feverish pace to add more Christian faith knockoffs to their repository with an ad campaign touting Joe Biden’s so-called “faith” and how it motivates everything he does. Democrats hope to shift battleground state religious voters to the Biden camp using emotional appeals and tired cliches and platitudes.

Two of the advertisements, “Principles,” and “Morning,” speak to Biden’s Catholic background and beliefs. The “Morning” ad suggests Biden’s faith carried him through dark times of personal loss. A third ad, “A Man Guided by Faith,” is narrated by a fellow-parishioner who claims Biden is a man of faith.

True believers will not be fooled by this deception, understanding the Democratic Party Platform stands in sharp opposition to Christianity. Let’s not forget Biden and the whole Democratic Party are joined at the hip with the anti-Christian human rights violator and forced abortion aficionado and Covid-19 originator–the Chinese Communist Party. Moreover, if he wins, Biden’s already promised to strip away religious freedoms and force taxpayers to fund abortions. Biden also pledged to restart the attack on the Little Sisters of the Poor, begun under the Obama-Biden administration.

This “finding religion” moment is not new for Democrats. They pulled the same “let’s pretend to be religious” stunt in 2016 when then-Democratic Party Vice Presidential hopeful Tim Kaine told a whopper to a New Orleans group, claiming Hillary Clinton’s faith was at the “root of everything she does.” Sound familiar?
I looked, but couldn’t find the Bible passage telling political candidates it’s okay to orchestrate a collusion hoax to distract attention from your emails. Or to lie profusely about your political opponents to seize power.

Anyone with half a brain understands the upcoming election is a battle for the soul of America. Unfortunately, Democrats and Joe Biden stand on the wrong side, and their tricks cannot make us believe what never existed in the first place. As C.S. Lewis once wrote: “Once you have made the World an end, and faith a means…it makes very little difference what kind of worldly end he is pursuing.”

The Road to Hell is a slippery slope, and Democrats feet are losing their grip.