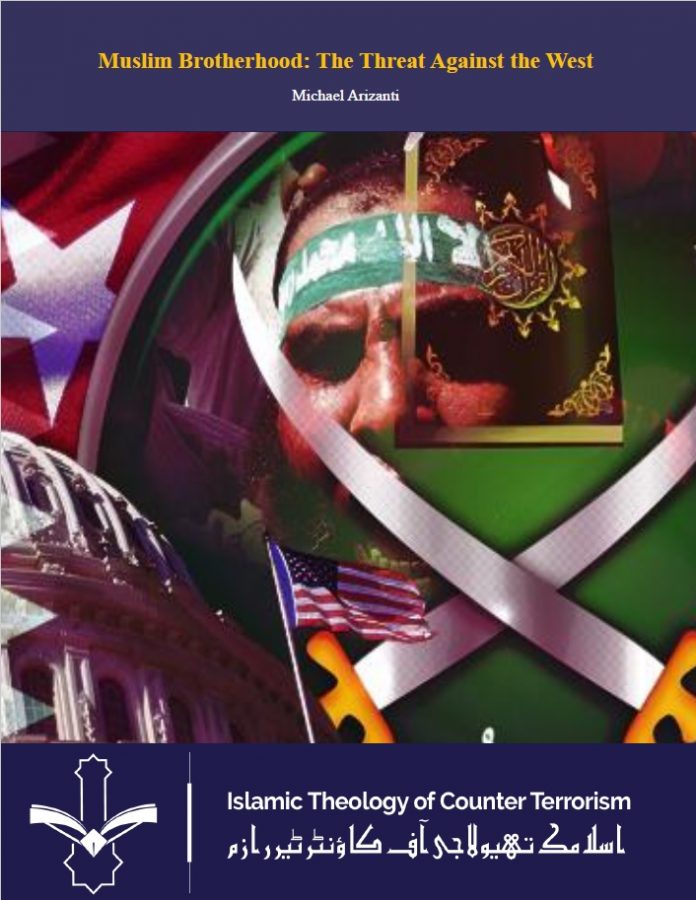 You may have heard of Al Qaeda, ISIS, Boko Haram, Abu Sayyaf Group, Al Nusra, The Muslim
Association of Britain, The League of Muslims in Europe, Islamic Society in Germany, Hizbul Tahir, Federation of Islamic Organizations in Europe, Islamic Association of Sweden and others.
What’s the common link between all these groups? They all were founded or run by individuals who were originally from the Muslim Brotherhood or founded by the Muslim Brotherhood themselves.

“Islam does not recognize geographical boundaries, nor does it acknowledge racial and blood
differences, considering all Muslims as one Umma (global community of Muslims). The Muslim
Brethren (Muslim Brotherhood) …. believe that the caliphate is a symbol of Islamic Union and an indication of the bonds between the nations of Islam. They see the caliphate and its re-establishment as a top priority…” –Hassan al-Banna
According to Colonel Dale C. Eikmeier who served in the Global War on Terrorism planning team the Muslim Brotherhood took a more violent turn in the 1950s, when the Brotherhood’s most notable theorist, Sayyid Qutb promoted jihad as an offensive force to be used against secular Arab governments. Qutb argued that Muslim societies living under these governments existed in a state of Jahiliyya, something similar to Arabia´s pagan existence prior to the message of prophet Muhammad. Qutb believed in that an offensive jihad and killing of secular state officials could lead to the implementation of Brotherhoods version of Sharia. Qutb believed that everyone who stood against the Brotherhood’s ideology were “takfirs” and or apostates and therefor legitimate targets for executions.

The Brotherhood has two pillars articulated by Hudaibi and published on the group’s website:

The Brotherhood seeks to implement its vision in stages. Banna promoted the gradualist construction of the Muslim individual, the Muslim family, the Muslim community, and finally the Muslim government, or Islamic State, which Banna believed would bind all Muslims to the Muslim Brotherhood.

When you look at the goals of Islamic groups like Al Qaeda, ISIS, and others, it’s easy to see where they got their ideas from. Muslim Brotherhood’s ideology, or so called Qutbism is structured on a common foundation of puritan Islamist orientations such as Wahabbi, Salafi, and Deobandi. These orientations.

• A belief that Muslims have deviated from true Islam and must return to “pure Islam” as
originally practiced during the time of the Prophet.
• The path to “pure Islam” is only through a literal and strict interpretation of the Quran and
Hadith, along with implementation of the Prophet’s commands.
• Muslims should individually interpret the original sources without being slavishly bound to the
interpretations of Islamic scholars.
• That any interpretation of the Quran from a historical, contextual perspective is a corruption,
and that the majority of Islamic history and the classical jurisprudential tradition is mere
sophistry.

As you should understand by now, the Muslim Brotherhood does not come in peace. The Muslim Brotherhood makes very large claims about itself. They claim to be the true representatives of Islam, they claim to work on the last and final revolution- worldwide, they claim that their ideology is the solution for the world (were as the slogan “Islam is the solution” – a slogan associated with the Brotherhood), the Muslim Brotherhood claim to be the solution for everything – that they will take care of everything in your life – everything from sexuality, economy, diet, your relations, everything they claim to have the total solution. They note of the word “total”, total is the first 5 letters of the word totalitarian, it´s absolute, it´s all inclusive. For an organization that makes such big claims about itself, I do find it odd that it does not like to have this claim questioned, even less criticized. They see themselves as the “key keepers” of the truth, and as pointed out earlier – anyone who question or
criticize are seen upon as “takfirs” and or apostates and therefore legitimate targets for executions, or severe punishment.

On March 1, 2019 Austria was the first European country to ban the logo of the Muslim Brotherhood, along with logos of other Islamist terrorist organizations. Austria was also then first European country to designate the Brotherhood as an extremist organization. They It extended the ban to the PKK, Hamas, the military wing of Hezbollah, the Muslim Brotherhood, the Turkish nationalist “Grey Wolves”, the Croatian fascist Ustashe, and organizations designated as terrorist by EU legal acts.

In July this year Austria launched an initiative to identify and register social and educational
institutions that are the targets of Islamist-controlled organizations for political purposes. Minister for Integration Susanne Raab said that the goal was to end parallel social structures that promoted patriarchal and separatist communities. Part of the new approach is to monitor social media and integrate this data with research and documentation of religiously motivated political extremism. Austria has a strong presence of Turkish government-controlled organizations as well as those affiliated with the Muslim Brotherhood.

Lorenzo Vidino, director of the Program on Extremism at George Washington University, said the underground nature of groups such as the Muslim Brotherhood is an issue for many countries. He thinks Austria’s approach is pioneering compared with the policies of other European countries. I think he is right. Addressing the threat of radical Islamism should be one of the main challenges to the internal agenda of the European Union.

Terrorism, and especially radical Islamist terrorism, is one of the challenges that the EU faces today. We have seen lately that countries like France are taking this challenge very seriously. In mid-July, the French government relaunched its state of the nation’s agenda around the fight against Islamism. It has promised legislation to target activity directed against the French state by members and supporters of this organization. The French Senate presented 44 proposals to combat the threat of the Muslim Brotherhood. It called for a ban on the organization on French territory.

I would urge the European Parliament to do the same thing!

Various national branches of the Muslim Brotherhood have had a long-established presence in Europe.  Some of their networks appeared as early as in the 50s. Since the inception of the Muslim Brotherhood in Europe their networks have grown and developed, and in some European countries they have managed to advance all the way to government positions, and they have official and unofficial relations with many Europeans politicians and policymakers, even though the Muslim Brotherhood is probably the biggest greenhouse for terror organizations and terrorists the world have ever seen.
They have directly or indirectly spawned several affiliate organizations. The issue is not without
contention and political consequences.

It should be critically important for all European policymakers to determent in some extent like France and Austria, wherever the Muslim Brotherhood should operate in their country or not. If yes, they should understand how it operates and what the aim of the Brotherhood are. To understand what the Muslim Brotherhood is all about is particularly important during this time were Europe struggle with massive polarizing debates about extremism, migration and Islam’s position in the European society.

PDF version of this article is provided here: