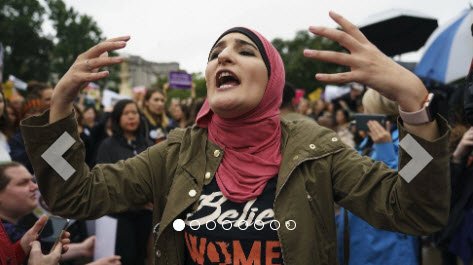 Source: The Federalist, By By Benjamin Baird, September 12, 2020

However commendable Biden’s decision was to disavow an antisemite like Linda Sarsour, the Democratic Party nominee should clean up his own house first.

On August 18, the Joe Biden campaign distanced itself from New York Democratic National Convention delegate Linda Sarsour after she gave a speech to a delegation of Muslim Democrats. A spokesman for Biden condemned Sarsour’s history of antisemitism and her support for the extremist boycott, divestment, and sanctions (BDS) movement aimed at Israel.

“She has no role in the Biden campaign whatsoever,” said Andrew Bates, director of rapid response for the campaign.

However commendable Biden’s decision was to disavow a habitual antisemite such as Sarsour, the former vice president should clean up his own house first. Indeed, Biden’s Muslim outreach director supports the same BDS movement that prompted Sarsour’s renunciation.

Moreover, Sarsour wasn’t the only member of the Muslim delegation who should have provoked controversy among Democrats. The “Muslim Delegates and Allies Coalition” that Sarsour addressed includes Islamist clerics, activists, and community leaders who possess extremist views.

To be sure, Sarsour did not attend the national convention on behalf of Biden; she was invited by Sen. Bernie Sanders (D-Vt.), who made a deal with the Biden campaign to drop out of the presidential race in April, so long as he could retain the delegates he won during the primaries. These delegates, including Sarsour and members of the Muslim coalition, voted against the official Democratic Party platform on August 4 because it failed to deny military aid to Israel and lift sanctions against Iran.

Although Sarsour was part of the Sanders delegation, the Biden campaign felt compelled to denounce her appearance before a small virtual audience of Muslim delegates. “Joe Biden has been a strong supporter of Israel and a vehement opponent of antisemitism his entire life, and he obviously condemns her views and opposes BDS, as does the Democratic platform,” Bates told CNN.

Certainly, Sarsour is worthy of criticism. In 2018, she was ousted as a co-chair of the national Women’s March for making antisemitic statements. In late 2019, the Palestinian American activist said that “Israel is built on the idea that Jews are supreme to everyone else.” She has also stated that “nothing is creepier than Zionism” and refused to denounce Nation of Islam leader Louis Farrakhan, a notorious Jew-hater.

Most significantly, Sarsour is an outspoken BDS adherent, a movement that Biden believes “singles out Israel and too often veers into anti-Semitism.” His concerns are warranted: the Ramallah-based BDS National Committee is composed of a coalition of Palestinian terrorist groups working with U.S. and European civil rights NGOs to destroy Israel through economic and diplomatic isolation.

Despite these concerns, Biden continues to ignore the BDS advocate on his staff. In June 2018, his liaison to the Muslim American community, Farooq Mitha, shared a Facebook post opposing federal legislation to prohibit U.S. businesses from joining foreign boycotts against Israel.

Mitha is a founding board member of Emgage, an umbrella of civic engagement projects consumed with electing pro-Islamist political candidates. Emgage holds many of its political literacy programs at terror-tied mosques, such as Florida’s Darul Uloom Institute, former home to Al Qaeda “Dirty Bomber” Jose Padilla. In 2014, Emgage (formerly Emerge USA) hosted Sayed Ammar Nakshawani, a British-Iraqi Islamist who has questioned Holocaust casualty figures and referred to members of a historic Jewish tribe as “loan sharks” to justify their slaughter by early Muslims.

Sarsour and Mitha, however, are hardly alone in championing a destructive boycott against Israel. The Muslim Delegates and Allies Coalition convinced the DNC to adopt its recommendation discouraging “elected officials from authoring or sponsoring anti-First Amendment anti-BDS legislation that chills speech and infringes on rights guaranteed in the U.S. Constitution.”

Some members of this Muslim delegation surpass Sarsour in terms of extremism, and their appearance at the national convention should have aroused dissent from party officials and the Biden campaign.

For instance, Asad Zaman is a delegate from Minnesota and the director of his state’s Muslim American Society chapter, an Islamist nonprofit known as the “overt arm” of the Muslim Brotherhood in America. Zaman has shared neo-Nazi websites on his social media which deny the Holocaust. He even publicly mourned the execution of a war criminal belonging to Jamaat-e-Islami, a violent South Asian Islamist movement.

Khurrum Wahid wasn’t only a Florida delegate to the DNC, but he also sat on the Democratic Party’s Platform Committee. A founding member and former co-chair of Emgage, Wahid built his South Florida legal practice around representing some of America’s most notorious terrorism offenders. His clients include Ahmed Omar Abu Ali, an al-Qaeda operative who received a life sentence for plotting to assassinate President George W. Bush.

Texas delegate Azhar Azeez is the former president of the Islamic Society of North America, an Islamist nonprofit listed in 2008 as an unindicted co-conspirator in the nation’s largest terrorism finance trial for supporting the Palestinian terrorist group Hamas. Azeez called Israel’s right to defend itself “false propaganda,” and he promoted a YouTube video claiming that support for Israel is predicated in a sinister Jewish lobby.

Ultimately, the DNC agenda expressed opposition to the BDS movement, while noting the importance of “protecting the constitutional right of our citizens to free speech.” In other words, the Democratic Party will oppose anti-BDS legislation enacted in 28 states, despite acknowledging the boycott’s inherent bigotry.

Unfortunately, the Biden campaign’s brief moment of courage has already been negated. Just days after condemning Sarsour, the Democratic presidential nominee sent his top advisors to placate Islamist supporters upset over the controversy. They apologized profusely, calling Bates’ statement an “egregious misstep” and pledging “to do better going forward.”

After such a cowardly and timid retraction, Democrats who are truly committed to equality have little hope of rooting out bigotry and antisemitism within the party — nevermind the country. How can they, when the delegates who write the rules are some of the most outspoken offenders?