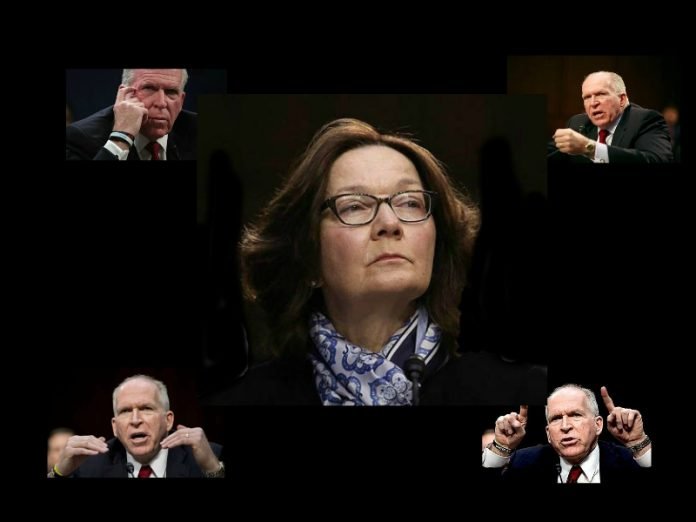 Recent reporting from The Federalist has revealed that Central Intelligence Director (CIA) Director Gina Haspel is preventing the declassification of documents detailing corruption at the highest levels of the intelligence community during the 2016 election. “I’m told that it is Gina Haspel personally who is blocking continued declassification of these documents that will show the American people the truth of what actually happened,” said Sean Davis, co-founder of the news site.

Most of the speculation concerning this revelation has focused on the theory that Ms. Haspel is blocking the release of documents out of some misguided sense of loyalty to the CIA. Per this theory, her motive is to spare the Agency embarrassment.

I would like to suggest another explanation. She’s blocking the release of information on the first attempted coup in American history because it is her job. Her job, not as head of the CIA, but her job as a member of the group that attempted to unseat President Trump and is still working against him from inside this government.

Per multiple press reports, including those from the Federalist, Gina Haspel was the CIA’s London Chief of Station under former CIA Director John Brennan during the 2016 election. She was handpicked for that job by Brennan himself.

“The station chief is often a senior U.S. intelligence officer who represents the Office of the Director of National Intelligence (ODNI)…”

The Chief of Station London is one of the most powerful people in the CIA. In that position, Haspel would have been responsible for our entire relationship with the British Secret Intelligence Service, popularly known as MI6 in the United States. She would have been the gatekeeper on that relationship. Nobody would have met with or communicated with MI6 without her knowledge and approval.

Haspel would also have had essentially complete visibility into any other interaction between any American intelligence service and any British intelligence service. This would have included any such relationship between NSA and its British counterpart GCHQ. In short, nothing would move vis a vis the Brits and intel without COS London knowing about it.

Consider the implications of all that.

The beating heart of the absurd Russian collusion story was the Steele dossier. This collection of poorly sourced and often salacious rumors was the work of Christopher Steele, a retired MI6 officer. Steele was run as a confidential informant by the FBI. It has already been established that Steele could not have worked for the FBI as a confidential informant without approval from his old bosses in London.

Everything concerning that approval, what Steele was doing, for whom, etc. would have been known to Haspel from jump street. In fact, given that Steele was part of an investigation targeting a man, Donald J. Trump, who was the GOP nominee for President of the United States and then, after November 2016, was the President-elect, one can fairly assume that the Chief of Station was personally involved – not just aware. That would have meant being fully briefed on Crossfire Hurricane – CIA Director Brennan’s “task force” that he had formed – and the scope of the efforts directed at Donald Trump.

This coordination, however, was far from the only element of a British nexus to Crossfire Hurricane. Early on in the investigation, the FBI sent counterintelligence agents – one of whom was Peter Strzo – to London to meet with the Australian ambassador, Alexander Downer. Downer had previously met with Trump campaign advisor, George Papadopoulos, and claimed that Papadopoulos had said things suggesting “some sort of contact between the Trump campaign and Moscow.” That meeting, on British soil, involving very senior FBI personnel and allegations of collusion between an American presidential candidate and Russian intelligence did not take place without the knowledge of the Chief of Station London. Nor did it take place without that individual being fully briefed on the background to the meeting and the full scope of the activity underway.

Multiple press reports have also established that GCHQ – Britain’s NSA – passed to the United States intelligence reports suggesting contacts between the Trump campaign and Russian intelligence operatives. Those reports would have gone to NSA. They would have also been seen by the CIA. Chief of Station London would have known about every one of those reports and the context in which they were being reported.

In short, COS London would have been in on the ground floor of what has now been conclusively established to have been an attempt to smear Donald Trump with baseless accusations of Russian collusion. That effort then morphed, after the election into an attempt to pervert our criminal justice system and depose a duly elected President. Almost daily, we receive further confirmation, in the form of declassified documents, that there was never any good faith basis for any of this.

Powerful people allied with Hillary Clinton, Barack Obama, and the Democratic Party acted outside the law. There was a conspiracy, and it came very, very close to succeeding. And, COS London was fully read in, made no objection, and to all appearances cooperated in the effort.

Brennan is out of government service, as is Comey. Most of the other conspirators have retired as well and presumably secured legal counsel. Gina Haspel has not retired. She has moved up.

As head of CIA, Ms. Haspel has complete visibility into all ongoing efforts to get to the bottom of the conspiracy to overthrow the President. She also has, as she is currently demonstrating, the ability to obstruct those efforts. In that sense, the coup never ended, and we must ask ourselves. Why is she still in charge at CIA?