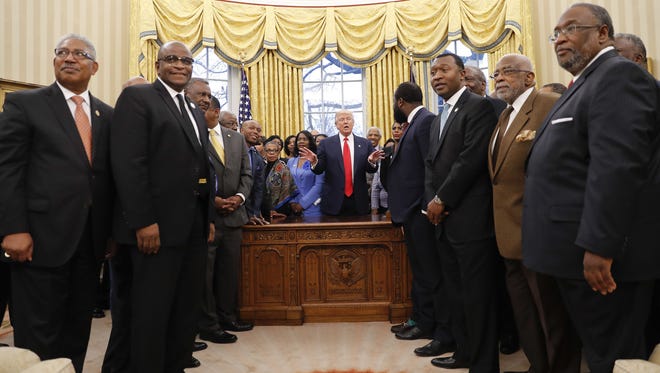 It seems that at every debate in which he has participated, whether in 2016 or 2020, Donald Trump gets peppered with the same, worn-out demand to “denounce white supremacists.”

But based on what?

Whether it’s Chris Wallace, or Savannah Guthrie, or Jim Acosta, some other loudmouth reporter screaming the “denounce” demand as the President walks by, this demand, premised upon a lie, gets repeated ad nauseam by dishonest journalists. Their purpose is to create a false impression that Trump has done something, or said something in the past, that makes him a “racist.”

But nothing could be further from the truth.

The president’s record shows something quite the opposite of the insinuations shouted by the Trump-hating members of the liberal media.  In fact, the president’s record, over time, pictures a man with a huge heart and great compassion and love for the African-American community in the United States.

“When we opened this Wall Street project, and we talked about it, he gave us (Operation Rainbow) space at 40 Wall Street, which was to make a statement about our having a presence there. And beyond that, in terms of reaching out and being inclusive, he’s done that too. And created for many people a comfort zone, when I ran for the presidency, in 84 and 88. When many others thought it was laughable, he came to our business meeting here in New York.”

In 1996, per the Wall Street Journal, “Trump filed a lawsuit in the U.S. District Court in Palm Beach, alleging that the town discriminated against Trump’s property at Mar-a-Lago, in part because it is open to Jews and African-Americans.” Trump often complained about other Palm Beach social clubs discriminating, and in one suit alleged that “the town commission sought to protect the discriminatory policies (against Jews and Blacks) of many of the town’s other private social clubs.”

A white supremacist suing to protect blacks and Jews?

With the Congress under Democratic control from 2009-2011, and with the power to pass prison reform with full Democrat control of the Congress, Biden and Obama did nothing. They were happy to let decent, nonviolent black Americans like Ms. Williams simply rot their lives away in prison, with no hope for freedom. By their inaction, Biden and Obama showed that they did not care about Williams or other peaceful blacks in prison who deserved a second chance.

The same was true for Biden’s friends in the Democrat-controlled Congress in 2009-2011. But they weren’t interested in prison reform and could care less about helping blacks. They never have cared, and still don’t care. They only wanted the black vote.

In contrast to Obama-Biden, Trump led the charge for prison reform. Trump worked with Congress to pass the “First Step Act,” releasing many African nonviolent offenders held in the federal system.

” … [e]very time people made a prediction that Donald Trump was going to sell us out, turn on us, wasn’t going to use political capital, he came harder… Donald Trump has got to get the credit. He stood up.”

Obama-Biden had their chance for prison reform but lifted not a finger. And Trump is the “white supremacist?”

Another Trump accomplishment ignored by Obama-Biden? Aid to black colleges.

Trump provided a substantial financial bailout to the Historically Black Colleges and Universities (HBCUs), again, something that Obama-Biden ignored.

In the Economist on September 19, 2020, Kentucky State University President, M. Christopher Brown said that President Trump “has been beating the drum on HBCUs as a cornerstone of his education platform from month one of his time in office.”

Chrichanni Watson, a minority student at Florida A&M University praised Trump in an op-ed for Breitbart. “That (HBCU support) directly impacts us, as HBCU students, and that’s something that cannot be said for the last administration… you’ve got to give the man some credit.”

Trump gives money and Wall Street real estate to Operation Rainbow, files a lawsuit to protect blacks and Jews in Florida, then as President, passes prison reform and bails out HBCUs, and he’s a racist? A “white supremacist?”

But let’s examine another part of the record:  Trump’s multiple “disavowing” statements, responding to questions about racism, relit without end from the leftist media.

Guthrie knew all this at the NBC Town Hall when she issued her “denounce” demand. But she didn’t care about the real facts, because she wanted to mislead voters. But Guthrie isn’t alone in this shameful practice. Fox’s Chris Wallace, who “moderated” the first presidential debate, also gas-lit the issue, demanding Trump “denounce” white supremacists.

When Trump denounced white supremacy, once again, in response to Guthrie’s gaslighting, here’s her response. “[i]t feels sometimes you’re hesitant to do so.”

“It feels?” That’s all you’ve got, Savannah? Feelings, not facts?

America deserves better than having gaslighting propagandists masquerading as journalists whose only aim is to help the Democrat party.

Meanwhile, even beyond his remarkable economic achievements, which led to the highest income level and lowest unemployment levels for black Americans in history, President Trump’s real record on progress in improving life for the African-American community makes him a giant among modern American presidents.

No one has done more, and no one can compare.

Don Brown, a former U.S. Navy JAG officer, is the author of the book “Travesty of Justice: The Shocking Prosecution of Lieutenant Clint Lorance” and “CALL SIGN EXTORTION 17: The Shootdown of SEAL Team Six.”  He is one of four former JAG officers serving on the Lorance legal team. Lorance was pardoned by President Trump in November of 2019.  Brown is also a former military prosecutor, and a former Special Assistant United States Attorney.  He can be reached at donbrownbooks@gail.com and on twitter @donbrownbooks.