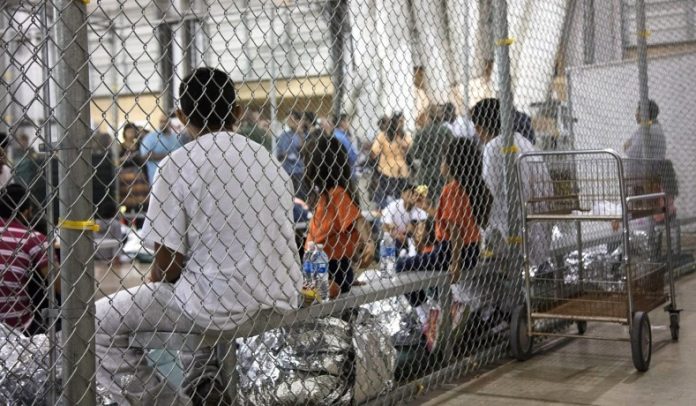 Parents don’t want to be reunited in their home countries

When the American Civil Liberties Union on Tuesday submitted its most recent court filing on the status of children separated from their parents at the U.S. border, mainstream media focused on one number: 545, the number of kids whose parents still haven’t been located.

President Donald Trump mostly dodged a question about how the families will be reunited.

But there’s a couple of numbers that have received significantly less attention in most news reports about the ACLU’s legal fight: 485, the number of children whose parents have been located, and 0, how many of those parents have sought to have their children returned home.

Chase Jennings, a Department of Homeland Security spokesman, said in a prepared statement the department has “taken every step to facilitate the reunification of these families where the parents wanted such reunification to occur.”

“The simple fact is this: after contact has been made with the parents to reunite them with their children, many parents have refused,” he said, noting that “out of the 485 children whom plaintiffs’ counsel has been able to contact, they have yet to identify a single family that wants their child reunited with them in their country of origin.”

The Trump campaign has picked up on that talking point. During an appearance on CNN’s “New Day” program on Friday, Trump campaign spokesman Tim Murtaugh called the ongoing family separations “a regrettable situation,” but added that the process of locating and reuniting families is not as easy as Biden and the media make it seem.

“When they are located in these other countries, in many cases … the parents do not want the children sent back to them in their home countries,” Murtaugh said.

The parents haven’t really confronted the choice of whether they want to bring their kids back to Central America, because they still hope the courts will allow them come to the U.S. In the meantime, the kids remain with relatives or foster families as they seek asylum, Gelernt said.

“The parents overwhelmingly want to rejoin their children in the United States,” he said. “That’s why they fled together in the first place.”

The ACLU filed its lawsuit to reunify families in 2018, in the wake of the Trump administration’s crackdown on families seeking asylum at the border. Thousands of families were separated.

The initial list included about 2,800 names, Gelernt said. The parents of those kids all have been located, including about 470 parents who had been deported.

But last year the government acknowledged there was another 1,000-plus children who had been separated from their parents who hadn’t previously been disclosed, Gelernt said. Those are the children the ACLU is tracking now, and the focus of last week’s court filing.

Gelernt said most of the families on this list were separated early in the process, during a pilot program, so a lot of the contact information the government provided was “largely stale.”

Ground searches for parents in Central America have been slow, and stopped completely between March and August because of the coronavirus pandemic. Those searches have since resumed, he said.

The effort to reunify the parents and children in the U.S. likely won’t be popular with immigration hardliners. Trump has said the threat of being separated from their kids might prevent some migrants from making the dangerous journey to the U.S. border. Ultimately, allowing parents to reunify with their children in the U.S. could incentivize more migrants to come to the country seeking asylum, opponents of the efforts say.

“It’s a very dangerous journey that people undertake to cross, in many cases coming all the way through Mexico, and it’s why we should not lay out the welcome mat and encourage people to do that,” Murtaugh, the Trump campaign spokesman, said on CNN.

Gelernt, who is fighting in court to allow the parents to come to the U.S., said he doesn’t think the threat of separation is a real disincentive for the migrant parents he’s met. They’re more afraid of being killed in their home countries, or having their children recruited by gangs.

Gelernt said he believes most of the migrants he’s met would have still come to the U.S., even if they knew ahead of time they would be separated from their kids.

“I think it’s completely misunderstood how much danger these families are in,” he said. “I also do not think that families make this trek lightly.”

Gelernt said this cohort of families has been “subjected to unbelievable, horrific trauma” because of the separation policy.

“For that reason alone,” he said, “we believe the government needs to do what’s right.”