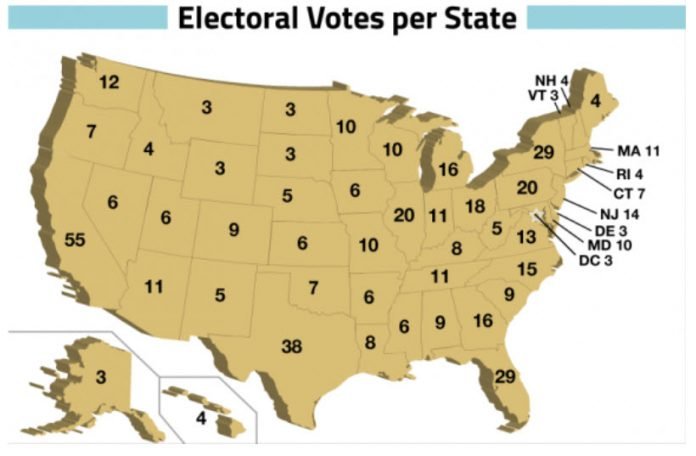 In the last twenty years, Democrats have twice lost presidential elections when the Electoral College has “trumped” the popular vote, leading to Republican victories. First came George W. Bush’s presidential victory over Al Gore in 2000, then Trump’s shocker over Hillary Clinton in 2016.

Thus, radical Democrats demand the abolition of the Electoral College.

“It’s undemocratic,” they say.  “The will of the people should rule,” they cry.

Yes, it’s undemocratic, which, believe it or not, is an exceptionally good thing.

That’s because the United States is not, and never has been a “democracy.”

The word “democracy” is not in the Constitution. In fact, the founders hated pure, unrestrained democracies.

Instead, Article 4, Section 4, states that the Constitution provides a “Republican” form of government. Not a democracy. There’s a difference.

“Democracy” equals mob rule, where angry, fist-shakers “vote” for or demand whatever they want. Imagine that, against the rights and interests of others. Think of the mobs burning Portland and Seattle.

That’s because the Electoral College erects a constitutional check-and-balance to prevent corrupt urban politicians and voters from wielding disproportionate power over the less powerful. In this case, that means rural and small-town America.

First, the Constitution establishes government’s primary role, which is to protect individual freedom.  The broadest freedoms designated for governmental protection are found at the Fifth and Fourteenth Amendments, guaranteeing Americans the right to life, liberty and property. Jefferson expresses a similar concept in the Declaration of Independence, discussing life, liberty and the pursuit of happiness.

So, protecting freedom is the government’s principal role, not to become a giant lollypop factory dispensing free goodies as the Democrats advocate.

Here’s the second concept: The Constitution is also a restraining device against over-concentrated governmental power.

When lecturing on the Constitution, to illustrate a point, I often show a photograph of a drunk driver, just after being arrested by police officers, with handcuffs clamping his hands behind his back.

Some of these checks-and-balances we may know, like divided government.

Our federal government is divided to prevent overconcentrated power.  Congress passes bills. The president signs bills into law, or vetoes bills. Congress may override vetoes. The president is commander-in-chief of the armed forces, etc, etc. The courts decide cases based on federal law.  It’s about dividing power.

The Bill of Rights places even more restraints on power. The First Amendment provides that Congress cannot pass any laws infringing upon (1) freedom of religion, or (2) of the press, or (3) speech, or (4) the right of the people to peaceably assemble, (5) or the right to petition the government for redress of grievances.

The Constitution creates many other checks against government: No search without a warrant. No warrant without probable cause.  No taking property without just compensation. No criminal trial without a right to confront witnesses. These are but a few of many governmental checks in the Bill of Rights.

Then comes the Electoral College.

The Founders understood that festering like a deadly cancer, political corruption metastasizes within large cities. They were right. Urban corruption has been a common thread since the beginning of the Republic.

In fact, liberal big-city leaders encouraged the violence, by ordering police stand-downs, and allowing thugs to burn and destroy property and lives without legal consequence.

Understanding this danger of urban graft, the founders created the Electoral College to protect small-town and rural America from being overrun by faraway, big-city corruption.

Electoral maps of the country from 2000 and 2016 show most of the nation’s counties voting red, with dots of blue concentrated around major urban cities. Geographically, it’s not even close. America remains an overwhelmingly red tapestry in terms of land.

Without the Electoral College, corrupt mobs in big cities like New York and Chicago, and shady socialist mayors like Bill DeBlasio and Lori Lightfoot who control election machines and graft in their cities, could always manipulate presidential elections, and control and manipulate the lives of farmers in Kansas, of coal miners in West Virginia, of fishermen working off the Carolina coast, of natural gas workers in places like Pennsylvania, Ohio, and Texas.

The Electoral College remains one of America’s last defenses to protect middle America against corrupt urban power, and a great check-and-balance against totalitarian rule-by-the mob.It must be defended at all costs.

Don Brown, a former U.S. Navy JAG officer, is the author of the book “Travesty of Justice: The Shocking Prosecution of Lieutenant Clint Lorance” and “CALL SIGN EXTORTION 17: The Shootdown of SEAL Team Six.”  He is one of four former JAG officers serving on the Lorance legal team. Lorance was pardoned by President Trump in November of 2019.  Brown is also a former military prosecutor, and a former Special Assistant United States Attorney.  He can be reached at donbrownbooks@gail.com and on twitter @donbrownbooks.