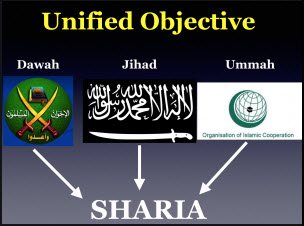 Have you wondered why so many American pastors say things about Islam which are objectively untrue or say nothing at all despite the fact Christians are being slaughtered around the world by muslims?

Like everything else we are experiencing these days, control of the narrative by muslims with regards to the understanding of Islam among Christian leaders and organizations is the intentional outcome of a long-term and well-coordinated effort by enemies of Jesus Christ.

In many cases, it is Christian Pastors letting the wolf in the door.

To set a few benchmarks down, lets compare the understanding of Jesus of Nazareth as taught in Christian and Islamic doctrine.

Christian doctrine teaches Jesus is the Son of God who is fully divine, and fully human, and is the Savior of the World.  The Nicene Creed, the statement of faith for Christians accepted at the First Council of Nicaea in 325 AD, states, in part:

“I believe in one Lord Jesus Christ, the Only Begotten Son of God, born of the Father before all ages. God from God, Light from Light, true God from true God, begotten, not made, consubstantial with the Father; through him all things were made. For us men and for our salvation he came down from heaven, and by the Holy Spirit was incarnate of the Virgin Mary, and became man. For our sake he was crucified under Pontius Pilate, he suffered death and was buried, and rose again on the third day in accordance with the Scriptures. He ascended into heaven and is seated at the right hand of the Father. He will come again in glory to judge the living and the dead and his kingdom will have no end.”

Holy Scripture records Jesus himself said, “I am the way and the truth and the life. No one comes to the Father except through me.” (John 14:6)

In Islam, Jesus, like Adam, Noah, Abraham, and others, is a muslim prophet.  Islam teaches – in the most authoritative hadith – that at the end of days Jesus will descend from heaven to kill all Jews and cast all Christians into hell for not converting to Islam.

Logic 101 teaches us an apple is an apple, and can only ever be an apple, never an orange.

Therefore, Christian pastors and Jewish rabbis who say “We all believe in the same God” are objectively wrong and can never be right.

The stated purpose of Islam, which is taught to eleven (11) year old children in U.S. Islamic schools as well as at the highest schools of Islamic jurisprudence, is to wage war against non-muslims until “Allah’s divine law”/sharia is imposed on all people on earth.

Are your pastors/rabbis teaching this?  If not, why not?

How did pastors and rabbis become so clueless?  One reason is that the U.S. Muslim Brotherhood owns the U.S. Interfaith Outreach movement.

The strategic center for the Muslim Brotherhood (MB), the International Institute of Islamic Thought (IIIT) is also at the center of Interfaith Outreach, and IIIT published Interfaith Outreach:  A Guide for Muslims.  In this publication the authors write, “We thank ISNA, especially Dr. Sayyid M. Syeed and Dr. Louay Safi, and that International Institute for Islamic Thought (IIIT) for their professional and moral support.”

ISNA (Islamic Society of North America) is identified by the Department of Justice as a Muslim Brotherhood organization which funds the designated Foreign Terrorist Organization (FTO) Hamas.

See UTT’s Statement of Facts which details the above fact and many others about the U.S. Muslim Brotherhood.

The Muslim Brotherhood’s publication, Methodology of Dawah, makes clear their devious use of Interfaith Outreach:

“The IMOA (Islamic Movement of America) will open dialogues with dignitaries of the religious institutions, presenting Islam as the common legacy of Judeo-Christian religions and as the only Guidance now available to mankind in its most perfect form for its Falah (Deliverance and Salvation). These talks must be held in a very friendly and non-aggressive atmosphere, as directed by Allah in the Quran as to how to talk with people of the scripture.”

According to the Muslim Brotherhood, ISNA has the lead role for Interfaith Outreach, and the Council on American Islamic Relations (CAIR), a Hamas entity, has “social justice” and civil rights aspects of the this hostile effort.

The purpose for all of the dialogue, outreach, interaction, and “togetherness” conducted by the Muslim Brotherhood is dissemination, intelligence collection, and control of the narrative.  It has nothing to do with “Interfaith Outreach.”